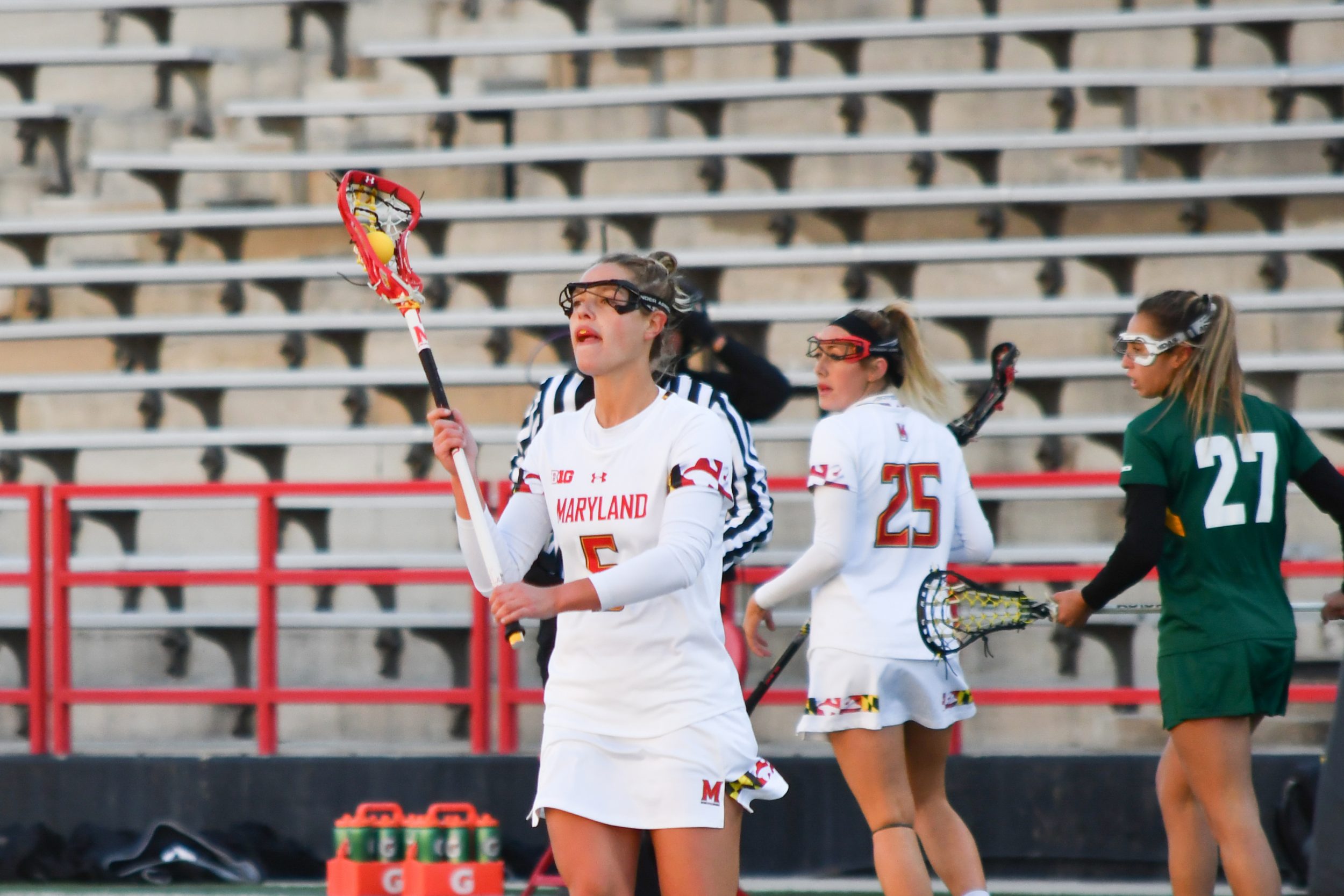 Midfielder Jen Giles jogs across the field during a stoppage in Maryland’s 16-5 win over George Mason at Maryland Stadium on Feb. 9, 2019. (Alex Chen/The Diamondback)

After Maryland women’s lacrosse midfielder Jen Giles netted five points in the first half of her squad’s top-five matchup with North Carolina in February, she began to struggle — and the rest of her team followed suit.

Maryland’s five-goal halftime lead had dwindled to a one-goal deficit with less than seven minutes remaining, and the Terps’ star midfielder was held without a point in the second half.

But despite the shift in momentum, attacker Kali Hartshorn deftly spun and buried a goal to tie things up. As soon as the ball rippled the net, Giles sprinted over to Hartshorn, clinging on to her longer than anyone else. And in double overtime, when attacker Caroline Steele sniped the winner, it was Giles who got there first.

Giles is Maryland’s leading goalscorer, and their most dangerous offensive weapon. But she’s also a leader who gets the most out of her teammates and unites the talented group in their quest for another national championship — even when things aren’t going her way.

“She has meant so much to Maryland lacrosse,” said coach Cathy Reese. “In so many more ways than what’s on the stat sheet and on the scoreboard.”

[Read more: “She’s a stud”: Erica Evans turned in her best performance yet for Maryland lacrosse]

Giles is on pace to finish top-10 in program history for career goals, assists and points. This year, she’s contributed nine hat tricks and is shooting a career-high 52 percent. But perhaps her greatest contribution to this year’s Terps squad is her impact on her teammates and constant dedication to the program.

The Ellicott City native’s first season with Maryland was in 2016, and she was quickly tabbed as the next to join in on a long-standing tradition of great Terp midfielders. And she learned from some of the best as a freshman, playing alongside Taylor Cummings — a three-time Tewaaraton Award winner — and All-American Alice Mercer.

“I’ve learned so much from other leaders who have been here before me,” Giles said. “I had great role models to look up to.”

Giles totaled 27 goals and 17 ground balls as a freshman in 2016 off the bench — and in doing so, she provided a glimpse into the future. Against Johns Hopkins that year, with Maryland down 7-6, Giles buried a free-position look to tie the game. On that April night, Cummings raised her stick in the air and ran to Giles. Cummings then brought the team into a huddle, just as Giles does today.

“On the field, she was incredibly competitive, incredibly receptive to advice,” Cummings said. “And open to learning new things.”

That year, the Terps fell in the national championship against North Carolina. Giles went scoreless on three shots. In 2017, Maryland was the team raising a national title trophy, due in part to Giles’ back-to-back goals that put the game out of reach.

As a junior last season, Giles was named one of the Terps’ four captains. She backed that recognition up by finishing in the top three for goals, assists and ground balls, filling up the stat sheet even as all-time Maryland leading goalscorer Megan Whittle handled the bulk of the scoring production.

[Read more: For Maryland women’s lacrosse, its Big Ten title is another trophy on a cluttered shelf]

Just as Cummings mentored Giles into the dominant player she is today, Giles has taken midfielder Grace Griffin under her wing. After earning All-American honors in high school, Griffin is now finding her footing as a sophomore, ranking fifth on the team in goals and poised to take on a bigger role in the coming years thanks to Giles’ guidance.

“Jen has been such an amazing person to play with,” Griffin said. “She was the biggest role model for me coming into school.”

Giles understood the struggle of being thrown into the fire among some of the best midfielders in the country as a freshman. She helped Griffin on and off the field, constantly offering advice and instilling confidence in her younger teammate.

And without the luxury of depth in 2018 that the Terps have this year — graduate transfer Erica Evans has taken some of the burden off Griffin and Giles — the pair motivated each other to keep pushing when fatigue set in.

“Sometimes in games we’d be running up and down the field … we’d be so tired,” Griffin said. “We would just hug each other walking back to the circle after we scored a goal and just know that we’re both there together.”

But Giles’ influence extends beyond her fellow midfielders. She’s in constant contact with the team off the field and helps to keep morale up among her teammates.

“She’ll text me and say, ‘I’m so proud of you,’” attacker Brindi Griffin said. “It definitely just gives me the confidence to keep going.”

Giles’ role is crucial for keeping the group level-headed as it prepares for another postseason run, and her ability to lead the storied program and lift up her teammates might just be the key come late May.