For Maryland women’s lacrosse, its Big Ten title is another trophy on a cluttered shelf 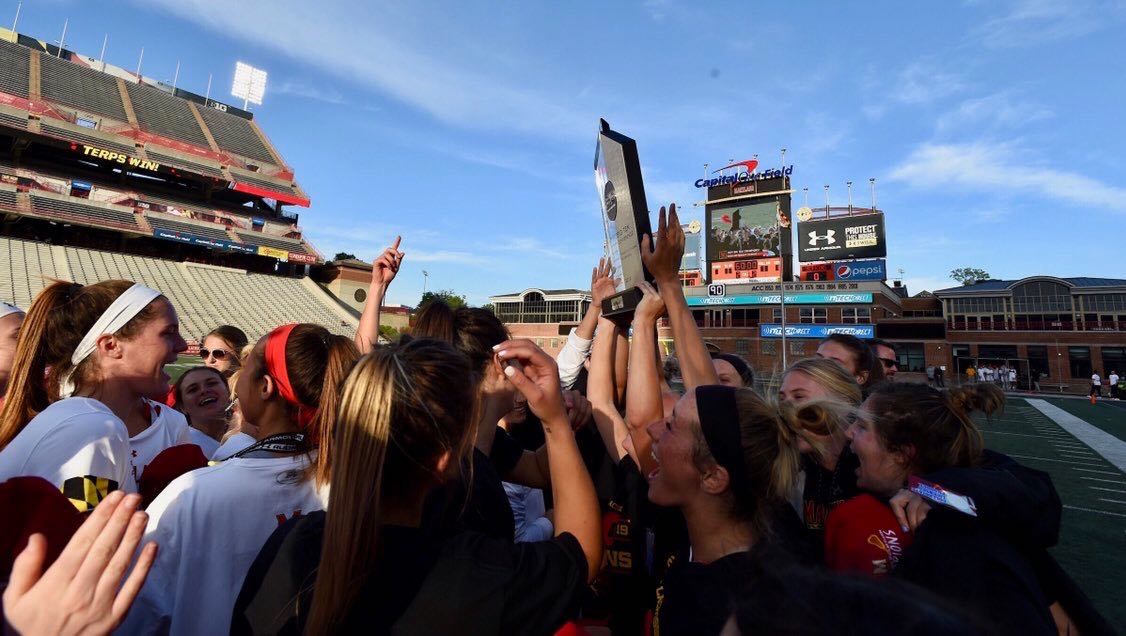 Back then, when it was Brooke Griffin scoring hat tricks — rather than her younger sister, Brindi — Maryland women’s lacrosse was entering the relative unknown.

The Terps moved from the ACC to the Big Ten in 2014. While they had previously faced many of their new conference’s powerhouses for years, it posed a new test for Cathy Reese, a coach who had already won six consecutive ACC titles leading up to Maryland’s departure.

But since the move, Maryland — and Reese — have found continued regular season Big Ten success. It began with a 16-5 win over Northwestern on March 26, 2015, in which Brooke Griffin put away two goals. And on Saturday, Brindi Griffin scored three times and the Terps raised their fifth straight Big Ten regular season trophy, capping another undefeated conference slate.

Reese, though, quickly steered the focus onto next week’s Big Ten tournament. It’s a mentality that can be credited as the bedrock of the Terps’ dynasty, even as the accolades and honors stack up around them.

“That was a big time in all of our lives at Maryland, when we transitioned from the ACC to the Big Ten. But you welcome new challenges,” Reese said. “Taking things one game at a time, one season at a time. And we’ve come a long way to be where we are right now.”

No. 2 Maryland’s senior class has lost one regular season game in its four years in College Park, and Saturday’s 19-12 win over the Blue Jays concludes a 67-1 regular season career, with the lone blemish an overtime loss to then-No. 7 North Carolina last year. The Terps are 28-0 in conference matchups since joining the Big Ten.

Reese, since rejoining her alma mater as coach in 2007, has won 11 of the last 13 regular season championships. It’s a testament to Reese’s ability to retool a roster every year instead of entering rebuilds, creating a formidable foe each campaign. This year’s no exception.

“It’s just the talent,” midfielder Erica Evans said. “We’re such a talented group this year… Everywhere is so strong, and it’s just so hard to stop all of us.”

That’s been increasingly evident this season. Entering Saturday’s season finale, the Terps had the second-best scoring defense in the country, allowing just 6.94 goals per game. While they let in 12 to Johns Hopkins, Maryland’s 19 goals was its second-highest tally of 2019, with six from Evans and four second-half efforts from attacker Kali Hartshorn to ice the game.

So, even though goalkeeper Megan Taylor posted a .250 save percentage, Maryland walked away with it, leading to a celebration around the senior shot-stopper as the final horn sounded on a win.

“We compete at practice,” Hartshorn said. “All week we’ve ran, we’ve lifted, we have intense practices. So I think that’s what really pumps us up to play.”

Maryland hasn’t missed a step since transitioning to the Big Ten, even as other sports have faced growing pains. Saturday earned another Big Ten championship trophy to be added to a cluttered shelf.

But the job’s not done. Evans said she eyes a national championship to close out her career, and the Terps are one of just two undefeated squads entering the postseason — the other being No. 1 Boston College.

“Obviously, proud of our success so far,” Reese said. “But now we’ve got a conference tournament that we’ve got to turn around and prepare for with only a few days’ rest.”

Because it’s always onto the next thing.