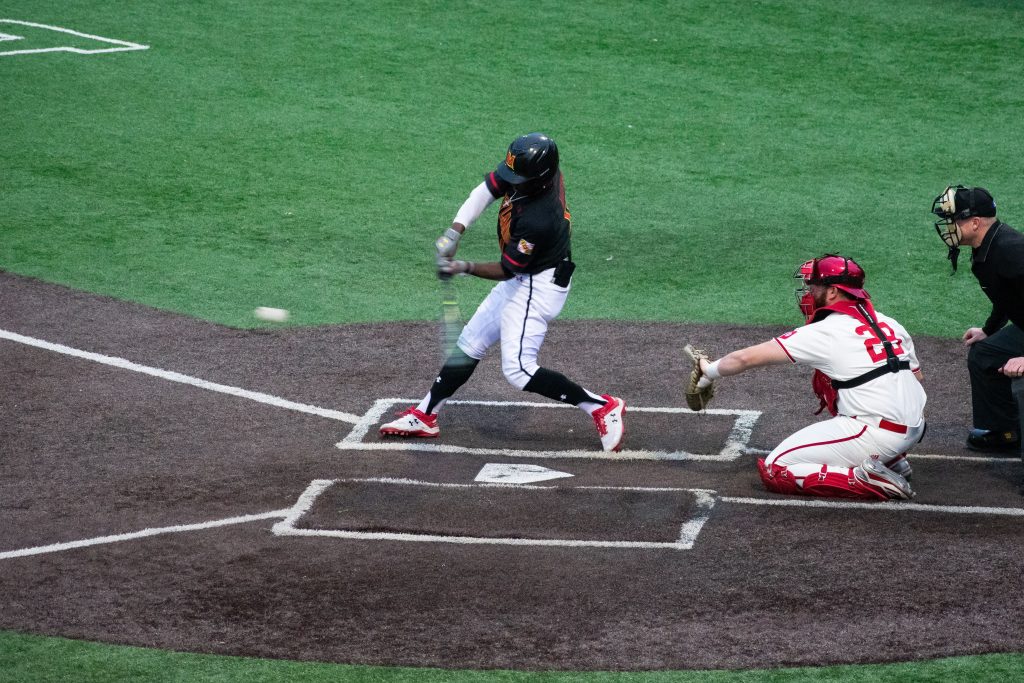 By Michael Arsenault
For The Diamondback

In relief of right-hander Hunter Parsons, right-hander Sean Heine entered for Maryland baseball and pitched a clean sixth inning, keeping his team’s deficit to four runs. But the freshman soon ran into trouble in the seventh.

Heine walked the first two Michigan batters he faced. He allowed two straight RBI singles, then walked a third batter and gave up a third single before coach Rob Vaughn left the dugout and called for right-hander Tuck Tucker to enter.

Two more runs crossed, giving the Wolverines a nine-run lead via their five-run seventh to offer enough of a cushion to withstand the Terps’ late comeback bid. Even as six runs crossed for Maryland in the seventh and eighth, it dropped its series opener against Michigan, 10-7.

The Wolverines started off Friday with a walk followed by a double from center fielder Jesse Franklin, putting runners on second and third with no outs. A sacrifice fly gave Michigan a 1-0 lead, before a hard-hit double into the left-field corner from third baseman Blake Nelson drove in another run.

The Wolverines kept up the pressure on Parsons in the second, with designated hitter Jordan Nwogu blasting a two-run home run over the center field wall. And after an error from second baseman Benjamin Cowles, a third run scored to put Michigan ahead 5-0.

Meanwhile, right-hander Karl Kauffman struck out the side in the second, and he kept the Terps hitless until the fourth inning, with a line drive from right fielder Randy Bednar doing the trick.

Parsons made it through five innings, giving up four earned runs on six hits, four walks and four strikeouts. From there, Heine took over and retired the sixth inning cleanly, and third baseman Taylor Wright homered in the bottom half of the frame to get Maryland on the board, down 5-1.

Heine walked the first two batters before first baseman Jimmy Kerr squeaked a groundball through the right side of the infield to plate one runner. Heine didn’t manage to record an out, allowing three runs to cross before he was pulled for Tucker. The junior allowed two more runs to cross, both charged to Heine, before the Terps got out of the inning down 10-1.

Kauffman began to falter in the bottom half of the frame, though, allowing Maryland back into the game. He allowed a leadoff walk and an error from second baseman Ako Thomas put two Terps on base. Then, center fielder Chris Alleyne clubbed a three-run homer to cut the scoreline to 10-4.

After Kauffman got the hook following seven innings, in which he allowed one earned run, one walk and struck out eight, right-hander Isaiah Paige ran into issues. He issued a leadoff walk and allowed a two-out RBI double from left fielder Caleb Walls before he was relieved.

From there, left-hander Benjamin Keizer entered and gave up an RBI double to catcher Justin Vought. He walked three straight batters, plating a third run in the inning, to make it 10-7 Wolverines.

While Maryland made it closer at the end, a costly five-run seventh inning built on early runs off Parsons to doom Vaughn’s squad to a series-opening loss.