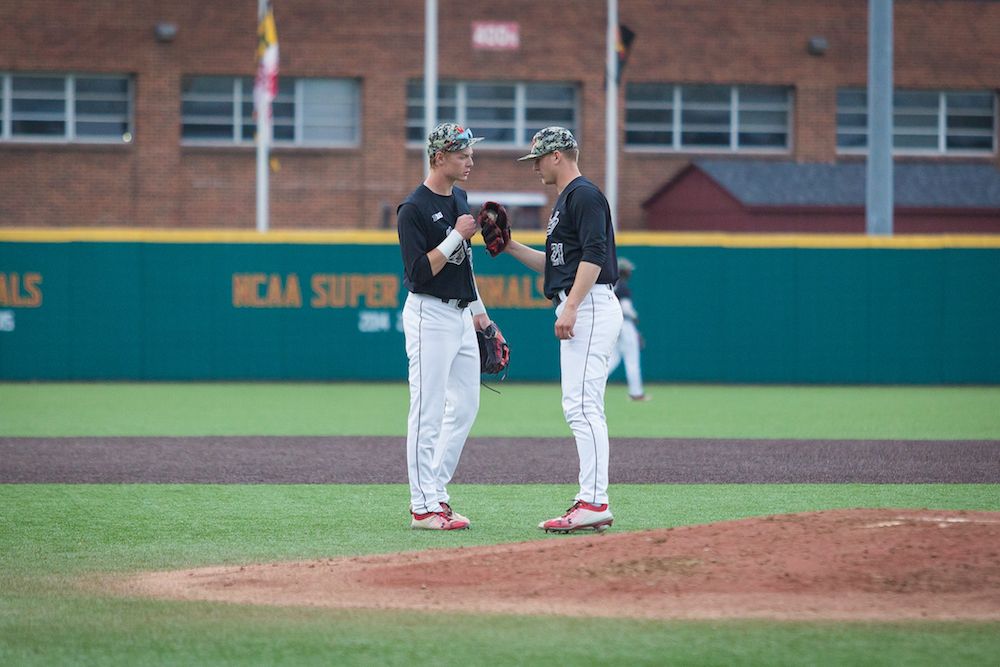 When coach Rob Vaughn reached his hand out asking for the ball from left-hander Tyler Blohm — 15 pitches later than he had in Blohm’s return from injury last week — the junior took off his glove and smacked right-hander Nick Turnbull, his replacement, on the leg.

For Blohm, it was 3 ⅓ no-hit innings of baseball, allowing one walk and striking out six in another promising display on the mound. And with the Terps’ offense rolling early, he exited in line for the win. However, he’d need Maryland’s rickety midweek bullpen to back up his effort for the remainder of Wednesday’s outing.

Turnbull struggled with first two batters he faced, though. He uncorked a wild pitch to advance Villanova’s Dylan McNary — the lone baserunner Blohm allowed on — to second. Then Wildcats first baseman Nick Lorusso knocked a double to left field for their first run. Turnbull walked the next batter.

But from there, he and the Terps’ relievers settled in. Lorusso’s double was the only hit Maryland’s pitching staff allowed in the 5-2 win, with a four-run second and a solo shot in the ninth to push Vaughn’s squad one game above .500.

After two months away from the mound with a shoulder injury, Blohm returned last week in a win over VCU. He was limited to two innings as he worked his way back in, yet the southpaw displayed his usual low-90s fastball with a biting curveball mixed in for punchouts.

Blohm’s arsenal proved potent Wednesday, too. He struck out the first two Wildcats batters looking, and ended the second inning with another whiff.

At that point, Maryland’s offense had already supplied Blohm with a lead to work with, teeing off on right-hander Ryan Toohers. Left fielder Caleb Walls led off the top of the second with a single. One pitch later, he advanced to third on catcher Justin Vought’s base knock.

Designated hitter Michael Pineiro’s sac bunt attempt resulted in Walls getting tagged out at home, but after a walk, right fielder Ben Irvine’s groundout plated one runner. Shortstop AJ Lee, who’s hitting .355 in the past 30 games since returning from an ankle injury, drove in two runs with a two-out single through the middle.

Blohm issued a four-pitch walk to open the fourth inning, but bounced back with a strikeout to end his outing. And after Lorusso’s two-bagger got Villanova on the board, Turnbull struck out five batters in 3 ⅔ innings.

Maryland flirted with disaster in the eighth, however, when right-handers Elliot Zoellner and Daniel O’Connor couldn’t record an out. Zoellner walked his first batter and plunked his second, and O’Connor entered, walked his lone hitter and promptly exited.

Left-hander Andrew Vail was called on next and struck out his first batter faced before walking in a run. He forced a groundball that turned into a 6-4-3 double play, though, to prevent a big inning for the Wildcats.

And to lead off the ninth, Vought immediately re-established the Terps’ four-run edge with a home run to left field, bookending his team’s offensive performance and setting Vail up with a low-risk save.

Wednesday’s win serves as a boost for a team that’s struggled at times to maintain leads. But at 23-22, Maryland’s best chance at achieving postseason play is through its conference results.

So, while a midweek win that featured 3 ⅓ strong innings from Blohm is encouraging, eyes will turn to a three-game set against Michigan this weekend — the Big Ten’s best team — as a true test of if the Terps can hold onto their top-eight spot, necessary to earn a place in the Big Ten tournament.