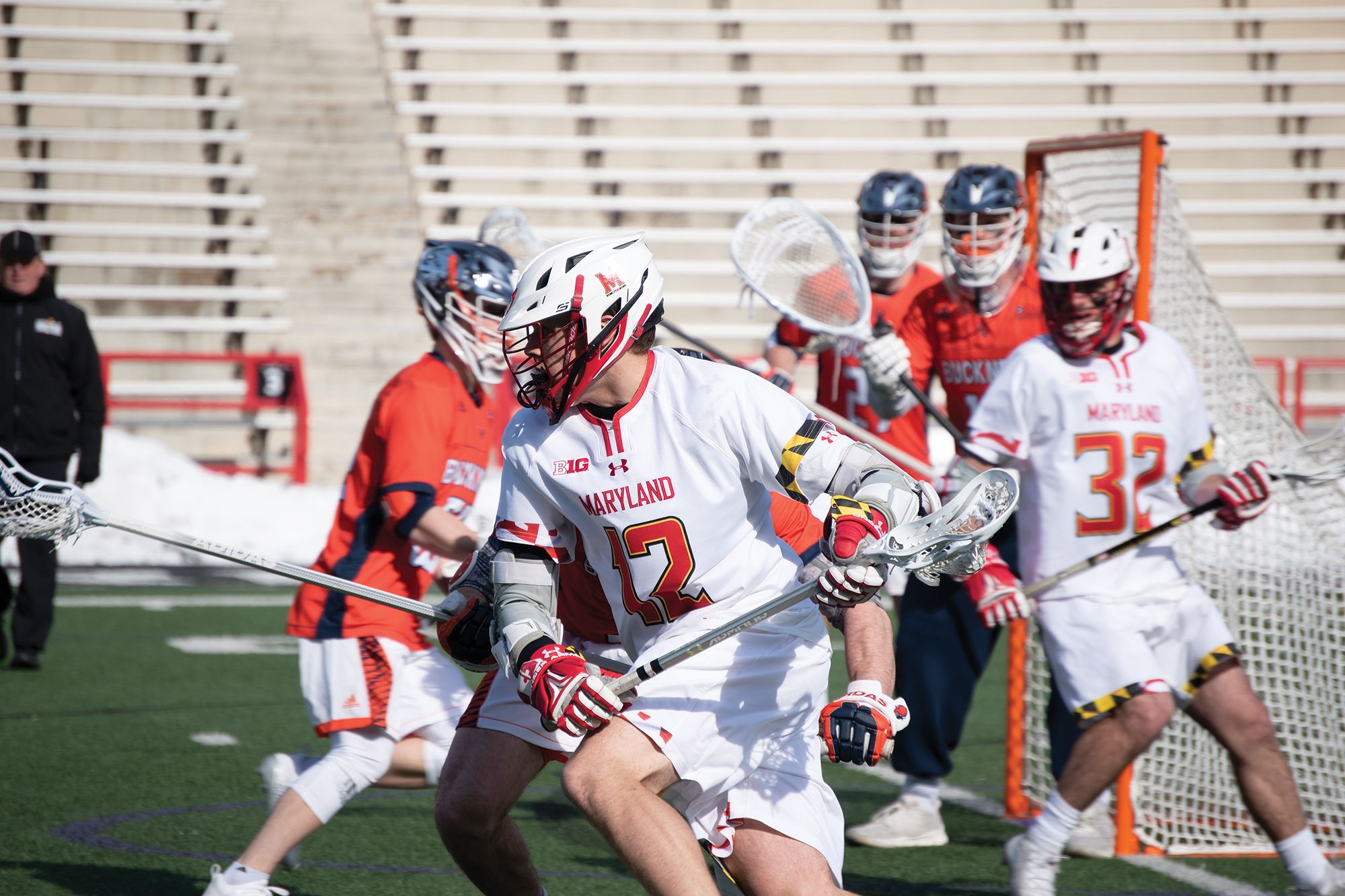 Midfielder Logan Wisnauskas brings the ball around during Maryland’s 11-6 win over Bucknell at Maryland Stadium on Feb. 2, 2019. (Joe Ryan/The Diamondback)

Tillman got just that against Johns Hopkins on Saturday. Entering the second quarter with a 5-3 lead, the No. 2 Terps were riding high against the Blue Jays due in part to two goals each from attackman Jared Bernhardt and midfielder Bubba Fairman.

But as Maryland held on to a 6-5 edge with about five minutes before halftime, Johns Hopkins attackman Cole Williams fired home the tying goal. The Blue Jays never looked back.

Three goals in 44 seconds gave Johns Hopkins a 9-6 lead entering intermission, and the No. 2 Terps couldn’t recover from a destructive six-goal second-quarter outpouring from their in-state rivals, stumbling to a 16-11 loss at Maryland Stadium.

“A lot of [our problems in the second quarter] were self-inflicted wounds,” Tillman said. “A lot of turnovers and just kind of stopping ourselves.”

Facing a two-goal deficit, the Blue Jays struck less than a minute into the second period, with midfielder Forry Smith bringing his squad back within one.

The Maryland offense could not find room near the crease with a swarming Johns Hopkins defense forcing errant shots, poor passes and sloppy turnovers.

“The first quarter, we came out on offense and we were feeling it,” Fairman said. “I think their defensive coach did an awesome job making adjustments. It didn’t come as easy for us in the second period and that put a lot of pressure on us offensively.”

After a goal from attackman Joey Epstein made it 6-5, a five-minute drought ensued. Johns Hopkins broke it, though, when Williams found the back of the net for the equalizer.

Thirty-three seconds later, Smith scored his second goal, giving the Blue Jays the lead for good. Just 11 seconds after that, a long-pole goal from midfielder Robert Kuhn opened up the lead to 8-6, and the run was on.

The six goals given up by the Terps were the second-most they’ve allowed in a quarter this season, topped only by the eight scored by No. 1 Penn State on March 31. The outburst buried Maryland, ending its regular season with a defeat and setting up a rematch with Johns Hopkins in the Big Ten tournament Thursday.

“Credit to them,” defenseman Curtis Corley said. “I feel like we could’ve done a lot better on the ground and just play a little more Terp lacrosse. We tip our hat to them.”