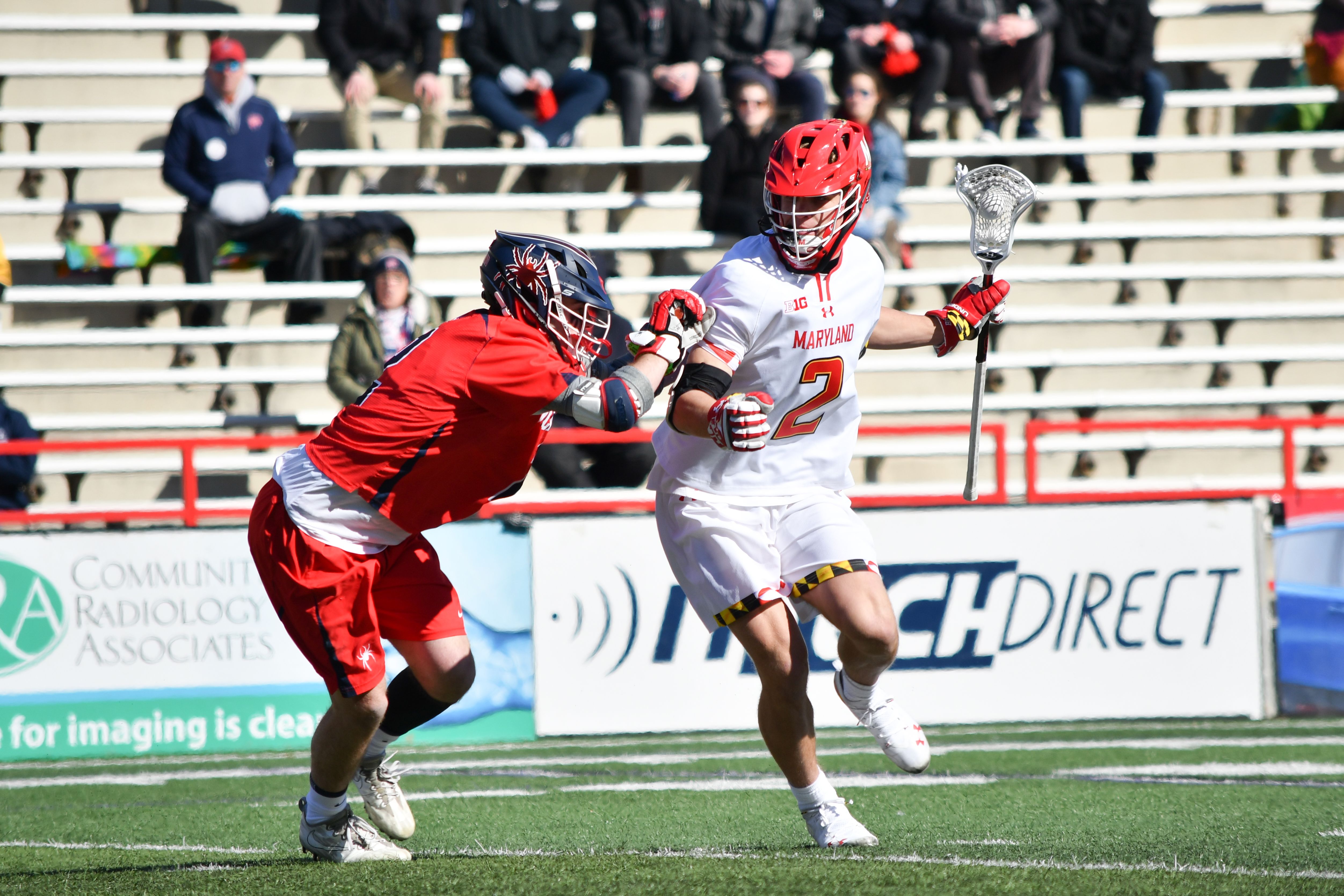 Midfielder Bubba Fairman keeps the ball away from a defender during Maryland’s 10-9 win over Richmond at Maryland Stadium on Feb. 9, 2019. (Alex Chen/The Diamondback)

After Johns Hopkins attackman Joey Epstein’s shot from the wing hit the back of the net, the freshman dropped to a knee and mimicked shooting a bow-and-arrow after giving the visitors a 14-10 lead late in the fourth quarter Saturday.

The celebration with just under five minutes to play was a fitting representation of the Blue Jays’ attack, as the unranked squad came into College Park and repeatedly exploited the Maryland men’s lacrosse defense with a deluge of shots.

During its 16-11 loss, the Terps defense surrendered a season-high in goals, allowing their in-state rival too many open looks on goalkeeper Danny Dolan. The senior was under siege throughout, facing 29 shots on goal.

“I think everything in lacrosse is complimentary,” coach John Tillman said. “Whether it was not winning faceoffs, or failing to clear, or missing a grounder and having short possessions, we just put a lot of pressure on [our defense].”

Tillman’s team lost several categories — faceoffs, turnovers, clears and ground balls — to allow Johns Hopkins extra looks on cage. With the lopsided possession numbers, the Terps defense was prone to breakdowns en route to their most goals allowed in a game since 2013.

Midfielder Bubba Fairman and attackman Jared Bernhardt each scored two goals, and midfielder Roman Puglise added a short-handed score in transition, as the Terps raced out to a 5-1 lead in front of 12,405 fans.

But for the second straight week, Maryland saw its opposition rally to take the lead. Johns Hopkins’ answer came in the form of inserting faceoff specialist Matt Narewski for Kyle Prouty, who Henningsen had handled early on.

“With the matchup we had, we were struggling a little bit. The simple answer is ‘OK, let’s give them a change up,’” Blue Jays’ coach Dave Pietramala said. “[Narewski] came in and gave us an important life against a good faceoff team.”

Following Prouty’s 1-of-5 start, Narewski won eight of his 12 chances to help flip momentum in the Blue Jays’ favor.

With the extra scoring chances, the visitors reeled off an 8-1 run during which they took their first lead and opened up a three-goal advantage. Johns Hopkins used a decisive 6-1 second quarter, with five different goal scorers, to lead the No. 2 Terps entering halftime, 9-6.

“Like coach has been preaching, we finally shared the ball really well today,” Epstein said. “Not caring about who scores, cutting hard off-ball and really just, you know, sharing the ball.”

To start the second half, Henningsen returned to his early-game form, controlling the opening draw. The Terps attack took advantage, and Fairman worked his way to the front of the crease and finished for his third goal to cut the Blue Jays’ lead to two.

Johns Hopkins didn’t allow that score to break its confidence, though, mounting a 3-0 run powered by Epstein, a Bethesda native, who assisted on the first goal and scored the third in his first rivalry game against the Terps.

Late in the third quarter, midfielder Russell Masci fired a right-handed shot to break Maryland’s scoreless stretch that had spanned over 12 minutes. A minute later, Fairman slotted home his fourth goal of the night to pull the home side within three, at 12-9.

The Blue Jays opened the fourth quarter with a goal from attackman Cole Williams that Fairman responded to with his fifth score of the night — a new career-high.

Though Fairman was finding success against Johns Hopkins’ defense, the rest of the Terps’ attack was held in check. Maryland was outshot 43-21, as Dolan was peppered with shots early and often.

“Twenty one shots — you’re not going to win a lot of games that way,” Tillman said. “A lot of turnovers, just kind of stopping ourselves at times.”

By the time Maryland scored its second goal of the fourth quarter, their rival had tacked on three more and put the game out of reach. Midfielder Anthony DeMaio’s late strike drew only a subdued reaction from a once-raucous crowd, as the Terps were headed toward their third loss of the season.

The Johns Hopkins’ faithful had a different feeling, as their squad captured “The Rivalry Trophy” for the first time since 2015.

With the loss to conclude its regular season, Maryland turns its attention to the Big Ten tournament, which starts Thursday. Tillman’s team will enter as the third seed, and will meet the Blue Jays again.

“Obviously, we’re really frustrated with tonight, but our coach always talks about next play, next game mentality,” Fairman said. “We’re going to have a little chip on our shoulder coming into this game.”