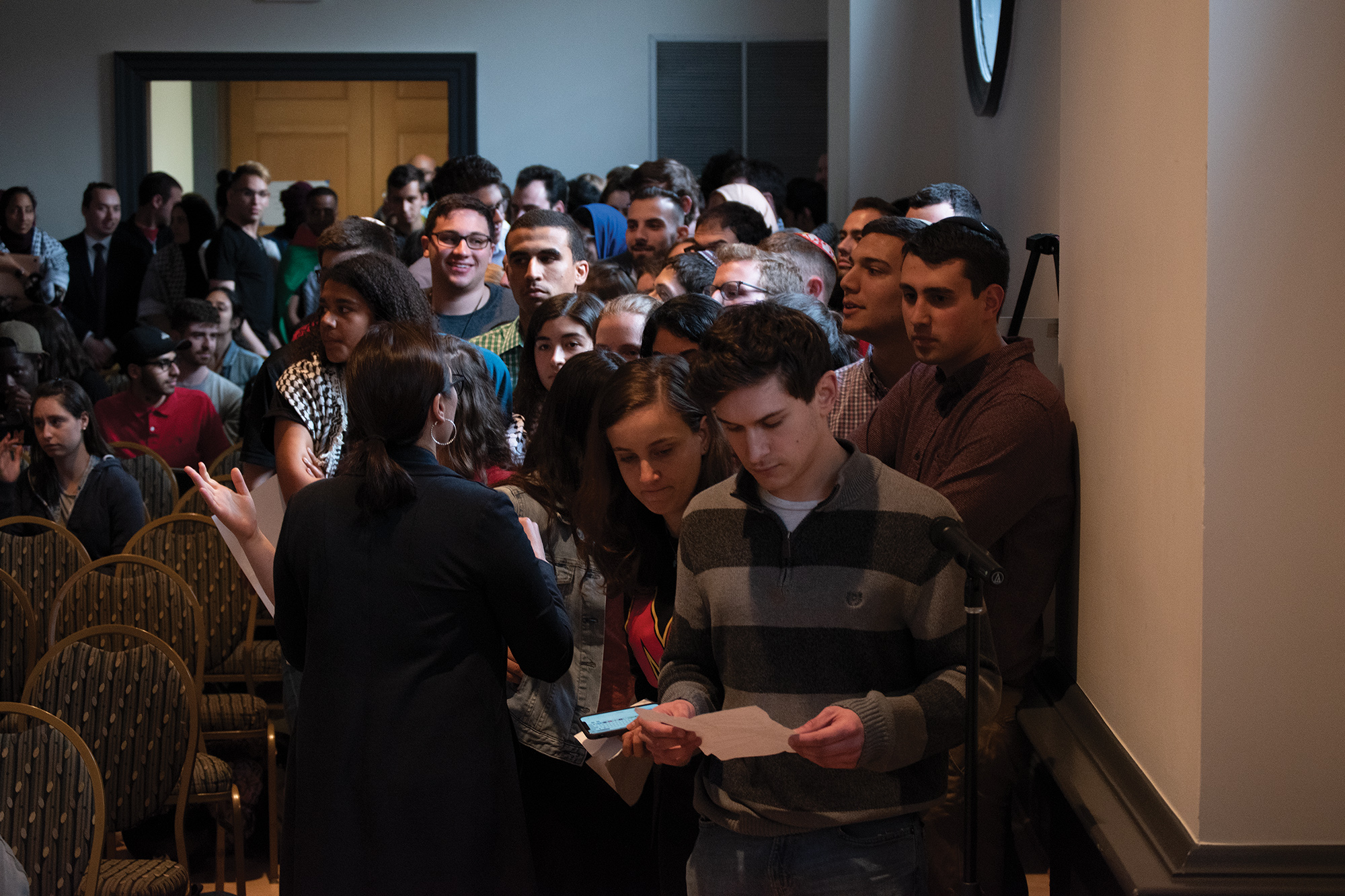 Students line up to speak during the SGA meeting on April 24, 2019. (Joe Ryan/The Diamondback)

More than 400 students trekked into Stamp Student Union’s Colony Ballroom on Wednesday afternoon before the SGA’s weekly meeting, filing past the University of Maryland police officers stationed at every entrance.

By just after 6 p.m., more than 100 of them stood in a line behind the podium, waiting for their turn to speak to legislators. The ensuing debate lasted for five hours.

And at the end of it all, the Student Government Association voted 25-9 with two abstentions to reject the bill at issue — which would have urged the university administration to divest from a list of companies that supporters say fund human rights violations in Palestinian territories.

“It’s very important to many people on this campus — both sides, both parties,” said Marielle Gerber, a senior elementary education major. “Everyone wants their voices heard.”

The debate marked the second time that students gathered to share their opinions on an SGA resolution inspired by the Boycott, Divestment and Sanction movement — commonly referred to as BDS.

The movement, which calls for economic resistance to Israel, has been a subject of intense debate on college campuses throughout the country.

Supporters say BDS is an effective and necessary form of protest against Israel’s treatment of Palestinians and occupation of the West Bank and Gaza, while opposers argue that it’s rooted in anti-Semitism, discourages dialogue between the two sides of the conflict and ignores the Israeli narrative.

In the 2017-18 school year, the bill died before reaching the floor for debate, after legislators heard from 61 students over a two-hour period. This year, the bill made it to the floor and featured over twice the student opinions as last year.

Seventy-four students spoke in opposition to the bill, while 55 spoke in favor of it, said David Rekhtman, an SGA computer, mathematical, and natural sciences college representative.

One student in favor of the resolution said the imbalance in speakers was partially due to supporters’ fear of backlash.

“You might not see as many voices here as the other side, but that’s because they don’t have to worry about being placed on a blacklist online,” the student said. “I have friends who are afraid.”

In the last year, universities across the nation — including the University of Michigan, Northwestern University and Rutgers University — have also debated similar divestment bills, according to the resolution.

At this university, 650 students signed a petition by #DivestUMD, an initiative of Students for Justice in Palestine. The resolution was endorsed by campus groups such as the Pride Alliance, Political Latinx United for Movement and Action in Society and the Muslim Alliance for Social Change.

At the meeting, some students compared the plight of Palestinians to that of victims of South African apartheid, and said it was the SGA’s duty to pass the bill, which encouraged the administration to consider “implementing greater student oversight” into their investments.

“Twenty years from now, do you want to look back and regret not having been on the right side of history?” one student asked.

An addendum to the bill calls out companies such as Lockheed Martin, Hewlett-Packard, Northrop Grumman and General Electric — all of which have a relationship with the university and aid violence against Palestinians, according to the resolution.

“The bill is asking for two things: transparency, and then, if applicable, divestment,” said Sarah Elbeshbishi, an SGA journalism representative and one of the bill’s six sponsors. “As students, it’s our responsibility to stand up against these human rights violations.”

But critics of the resolution argued that it didn’t cite enough sources for its claims.

“To allege that entities have committed gross human rights violations without evidencing those claims in the bill is not only irresponsible but also slanderous and reprehensible,” one student said. “This bill would not be acceptable to submit as an assignment in any class at this university.”

Those opposed to the bill — many of whom said it oversimplified the complex conflict — also maintained that endorsing it would set a dangerous precedent on the campus.

“Not only does it shut down dialogue, but it creates an environment that is unsafe for students,” said one student, who added that just hours after BDS legislation was passed at the University of Michigan, swastikas were found in the mens’ bathroom.

A petition against the resolution was signed by 1,086 students, according to a representative from Terps United Against BDS. A letter sent Tuesday addressed to outgoing SGA President Jonathan Allen, signed by seven of the state’s U.S. Representatives and Democratic Sen. Ben Cardin, called the resolution “profoundly counterproductive.”

Many students from both sides offered personal stories during the long and often emotionally- charged debate, speaking about how their lives had been shaped by spending time in the region.

At several times throughout the four-hour student concern section — which was followed by an hour-long debate between legislators — speaker Noah Eckman had to ask the crowd to refrain from clapping, snapping or holding up signs.

Allen said in a statement to The Diamondback that despite his anti-BDS stance, he valued the chance to hear the opinions of all students.

“I think it’s important for legislators to hear the comments and concerns of their constituents so that they can responsibly vote on a very difficult and divisive issue,” the senior government and politics major said.

And despite the resolution’s failure, some of its supporters said they’d continue to speak up.

CORRECTION: Due to an editing error, a previous version of this story’s photo caption misstated the date of the SGA meeting. It was on April 24, not April 25. The caption has been updated.