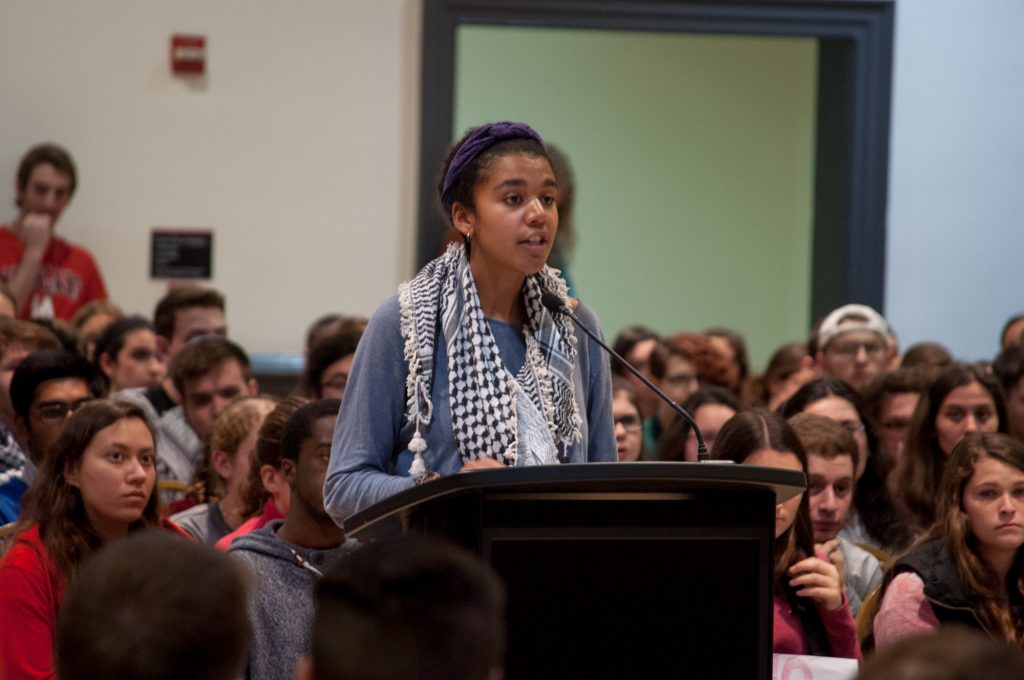 Miranda Mlilo, an undergraduate student, addresses the Student Government Association at a meeting regarding the BDS movement on November 15, 2017. (Elliot Scarangello / The Diamondback)

After hearing 61 University of Maryland students voice concerns on the Palestinian-led Boycott, Divestment and Sanctions movement, an SGA bill supporting the movement died before reaching the floor for legislative debate.

About 400 students, faculty and staff filled Stamp Student Union’s Colony Ballroom on Wednesday to discuss the Student Government Association bill, which called on this university to divest from companies BDS supporters say profit from and enable human rights violations in Palestinian territories.

After about two hours of student debate, the SGA Student Affairs Committee presented an unfavorable report of the bill in a 1-21 vote with three abstentions. Legislators debated on whether to overturn the decision, and the body failed to overturn the report in a 23-13 vote with one abstention.

Of the 61 students that spoke, 45 of them opposed the bill, said SGA legislator David Rekhtman.

The bill’s two co-sponsors proposed the legislation after Students for Justice in Palestine approached them with concerns about the BDS movement.

“As a legislator of the student government, my job is to listen to the concerns of students and student groups,” said Tobi Olagunju, SGA’s freshman representative. “With that responsibility in mind, I proposed this bill to give Students [for] Justice [in] Palestine an opportunity to express their concerns about an issue they had.”

Student organizations including Terps for Israel, J-Street UMD and Mishelanu created a petition against the SGA proposal. More than 1,000 undergraduate students signed the petition as of Thursday, said Terps for Israel President Avi Schneider.

The BDS movement doesn’t have a peaceful end goal between Israelis and Palestinians, Schneider said, adding that the movement is unproductive.

“The most productive way is having these strong conversations and dialogue and working together to be able to promote investing in both Palestinian and Israeli peace projects,” Schneider said.

One student urged the legislature to vote against BDS in order to catalyze a more productive conversation.

“BDS does nothing to facilitate that change [of status quo in Israel], nor does it help to promote dialogue between Israelis and Palestinians or students on campus,” said Talya Gordon, a sophomore psychology major. “What BDS does is shut down the conversation before it can ever be had.”

Muslim Student Association President Haris Ansari attended the meeting to represent himself and his organization in supporting the bill and the betterment of the Palestinian people.

“This bill is not about the dislike of a country or a nation, rather it is about the respect and rights of the Palestinian people,” said Ansari, a senior biology and physiology major. “Every movement of human rights faced backlash by the majority and every movement had difficult decisions to make and this movement will be no different.”

Negotiations and peace talks between Israelis and Palestinians have failed for the past 70 years, so it is unlikely they would work in the future, Mlilo said.

“The reason there can’t be peace is because there’s no justice,” Mlilo said. “If two people are entering a negotiating table from completely imbalanced positions of power, how can anything get done?”

A “non-exhaustive” list of 25 companies, including Hewlett-Packard, Motorola Solutions and the Africa Israel Group, profit from and enable Israeli occupation in Palestinian territories, according to the bill.

The BDS movement has gained support at Big Ten universities including Northwestern University. The University of Michigan’s Central Student Government passed a divestment resolution early Wednesday in a 23-17 vote with five abstentions.

According to the anti-BDS petition, the movement could foster an anti-Semitic environment at this university. Within the past year, University Police have responded to several illustrations of swastikas on various parts of the campus.

“We hope and believe that won’t happen on this campus,” said Schneider, a junior marketing major.

But Mlilo said “it’s important to focus on what this bill is actually about and not the emotional rhetoric that people are saying might happen after it’s passed.”

Groups outside of this university weighed in on the debate before it took place Wednesday night. Sen. Ben Cardin (D-Md.) and six of Maryland’s Democratic U.S. Congressmen signed a letter to SGA President A.J. Pruitt in opposition to the BDS movement “that would only undermine efforts to achieving Middle East peace through a two-state solution.”

The SGA bill does not encourage support for a two-state solution, Pruitt said, adding that he is not in favor of the bill as written.

“I would look much more favorably on legislation that says we will do everything we can to not support the illegal settlements in the West Bank or Gaza but that’s not really what this bill does,” said Pruitt. “I’d look more favorably on legislation that said if we’re also investing in companies that support the state of Israel.”

SGA Speaker of the Legislature Jonathan Allen kept his beliefs private at the meeting but has not changed his stance since he was president of Terps for Israel, he told The Diamondback.

“[BDS] seeks to delegitimize and subject [Israel] to a ridiculous double standard. … It is detrimental to the peace process because it discourages the necessary negotiations and compromises needed to make peace,” Allen wrote in a message in February.

Last month, Gov. Larry Hogan signed an executive order prohibiting executive branch agencies from doing business with entities unless they certify that they will not engage in a boycott of Israel. In the executive order, Hogan said that a boycott of “people or entities because of their Israeli national origin, or residence or incorporation in Israel or its territories,” would violate the state’s commitment to cooperate with Israel.

A boycott of Israel by this university would be inconsistent with Hogan’s executive order, public policy professor Donald Kettl wrote in an email.

Ashli Taylor, one of SGA’s off-campus neighboring representative and one of the bill’s co-sponsors, said while it did not reach debate, she was happy all students’ concerns were heard.

An event to discuss Israeli-Palestinian conflict with Terps for Israel, SJP and the SGA should take place in the future to continue moving forward in a civil way, said Taylor, a senior government and politics major.

“I’m in favor of fostering discussion and pro-human rights on both sides,” she said.

CORRECTION: Due to a reporting error, a previous version of this story incorrectly stated that the behavioral and social sciences college and the University Senate supported an SJP petition in favor of the pro-BDS bill. This story has been updated.