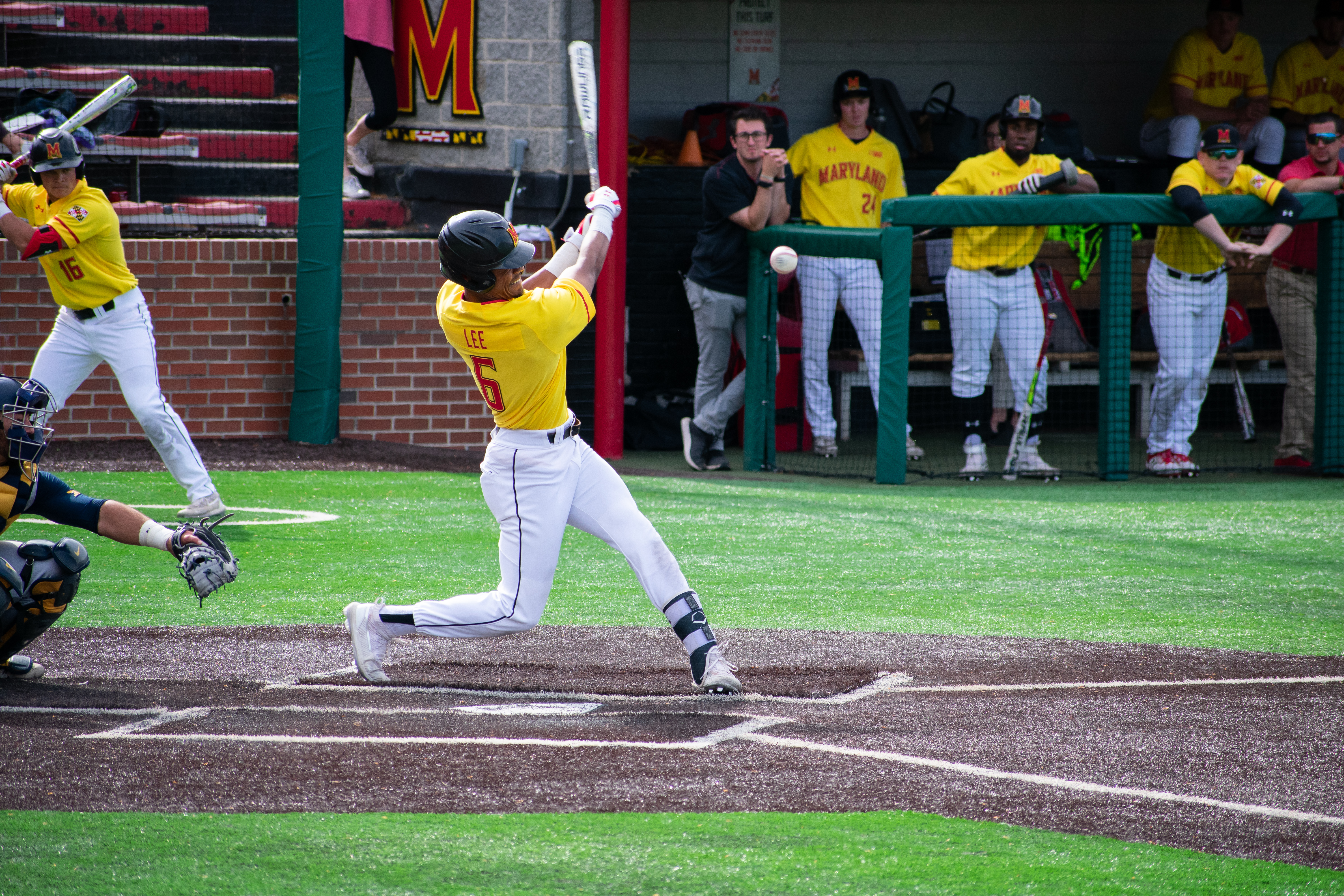 When Maryland baseball first baseman Maxwell Costes launched a three-run homer over the center-field wall late in the first game of a doubleheader Saturday, the blast did more than just bloat the Terps’ run column on the scoreboard.

The bomb did give Maryland an insurmountable seven-run lead, but it was also the squad’s 20th hit of the game — the first time the Terps had reached that threshold since 2012 — in the 14-8 win.

The offensive eruption carried over into the nightcap, but an inconsistent bullpen complicated matters. Coach Rob Vaughn opted to send closer John Murphy back out for his third inning of work after giving up the tying run in the ninth, although the length seemed to catch up.

On an 0-2 count with two outs, Murphy’s pitch caught too much of the plate. Designated hitter Brent Todys jacked a solo homer to left field, giving Ohio State a 10-9 win in 11 innings to split Saturday’s doubleheader.

Last week, right-hander Hunter Parsons (7-2) gave up seven runs on eight hits against Northwestern — the Terps still won 13-8 — and just like that contest, the team’s ace delivered another shaky showing against the Buckeyes in game one.

The Fruitland native was solid for much of the matchup Saturday, but a five-run third inning, in which the Buckeyes notched six hits and benefited from a pair of Maryland errors, marred an otherwise decent showing.

Yet, for the second time in as many weeks, the Terps’ offense rescued him.

Maryland started the topsy-turvy game with a 3-1 lead, as shortstop AJ Lee — who notched seven hits on the day — and Wright each scored on a pair of wild pitches in the first, and center fielder Randy Bednar knocked a run in with a two-out double down the left-field line the following inning.

Ohio State countered with a five spot in the third. From there, Maryland’s offense erupted.

Maryland levelled the score with three straight hits in the fourth, highlighted by Bednar’s two-RBI triple that split the right-center gap. And catcher Justin Vought knocked in designated hitter Josh Maguire to take back the lead the next inning.

Shortstop Zach Dezenzo got one run back for the Buckeyes with a sixth-inning homer, the final run off Parsons and Dezenzo’s second blast of the day, but it wouldn’t be enough.

Left-hander Sean Fischer entered in relief and allowed one run in the final three innings to close it out, and Maryland put the game away for good with five runs in the seventh — three of which came from Costes’ dinger.

Unlike game one, Ohio State delivered the first blow of the nightcap.

Right fielder Dominic Canzone and left fielder Brady Cherry both put 1-0 deliveries from right-hander Zach Thompson over the right-field wall in the opening inning, giving the Buckeyes an early 2-0 lead. But the advantage dissipated quickly.

Lee doubled home the first run, and Wright’s two-bagger gave Maryland a 3-2 lead in the second. Costes, who finished with five RBIs on the day, left the yard for the second time Saturday to score two more and extend the Terps’ edge even further.

Thompson, like Parsons, didn’t allow the early blip get to him. The redshirt sophomore finished strong, allowing two runs in his final five frames and doing just enough for Maryland’s surging offense to stay out front.

The Terps added two in the third, and left fielder Caleb Walls hit a moonshot into the football practice fields beyond the right field wall for insurance; his first home run since March 19th against Elon.

Although right-hander Elliot Zoellner and left-hander Andrew Vail imploded in the eighth — they recorded just two outs and gave up four runs as Ohio State tied it up at eight — Wright plated the go-ahead run in the bottom of the frame.

But closer John Murphy blew the save after Wright’s error allowed first baseman Conner Tohl to advance to second following an infield single. And after the Terps stranded bases loaded — with strikeouts from Costes and Maguire — Murphy was stretched to a season-high 62 pitches. Todys left him to watch as his 0-2 delivery was hammered out of the yard.

And left-hander Andrew Magno, who entered in the eighth inning, struck out 11 batters. He fanned the side in the bottom of the 11th, extinguishing Maryland’s blistering offense and securing Ohio State’s split.