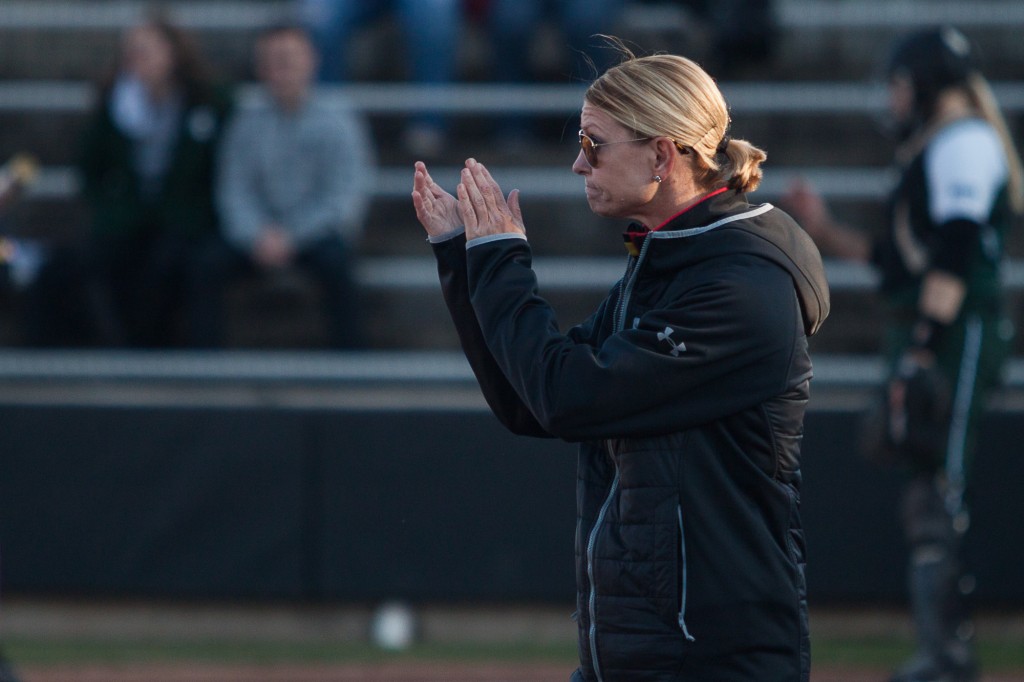 Head Coach Julie Wright applauds a hit on the field during Maryland’s match against Michigan State at the Maryland Softball Stadium on April 8, 2016. (Reid Poluhovich/ The Diamondback)

The Terps’ performance in State College propelled them to a strong start in conference play, including sweeping Iowa the next week. But coach Julie Wright’s squad soon teetered, losing its final nine regular-season games and dropping its lone Big Ten tournament game.

But before facing Penn State this weekend, Wright takes confidence from the first of two games against Indiana, in which the Terps bested pitcher Emily Goodin — who owns a 2.19 ERA — and their pitching staff held the Hoosiers to three runs. Maryland hopes it can build off last week to secure its first series win of the season against a team it found success against last year.

“We are good enough and talented enough,” Wright said. “If everybody just produces in what their role is, we will take this Big Ten series.”

A quick start to the 2018 Big Ten campaign helped the Terps sneak into the conference tournament field, although their losing streak pervaded into the postseason and Illinois knocked them from contention.

While Maryland has gone without a series win so far this year, a strong nonconference record and three wins during the conference schedule have helped the team surpass its win total from last year. The Terps sit in 12th place in the Big Ten, the final spot eligible to make the tournament.

“We’re definitely going to try to win the series against Penn State, and take one from Rutgers,” pitcher Victoria Galvan said. “Just trying to win as many as we can to get to the [tournament].”

In the Terps’ lone win against Indiana, they scored four runs on 10 hits. Their first-inning outburst that chased Goodin after just two outs created a lead the Terps wouldn’t cough up. Goodin walked center fielder JoJo McRae to lead off the frame and later gave up back-to-back singles and a second walk before right-hander Natalie Foor relieved her in the circle with bases loaded.

“My approach has just been to put a good swing on a nice pitch,” Wilson said. “I’m trying not to make it bigger than it is, especially in RBI situations where our team needs runs.”

Maryland managed just one more run after that — a solo homer from Stefan in the third — but the first-inning runs sufficed. Solid pitching from Galvan and Sami Main helped the Terps outlast the Hoosiers for their 19th win this year.

As long-lasting success has been hard to find, Maryland frequently focuses on cleaning up its defense and pitching while coming through in the clutch on offense. But Wright’s message to the team after Tuesday’s practice was not just about technique.

Wright told her team to stay the course, and the wins would come.

“All we have to do is us,” Wright said. “We don’t have to be extra special to win ball games.”