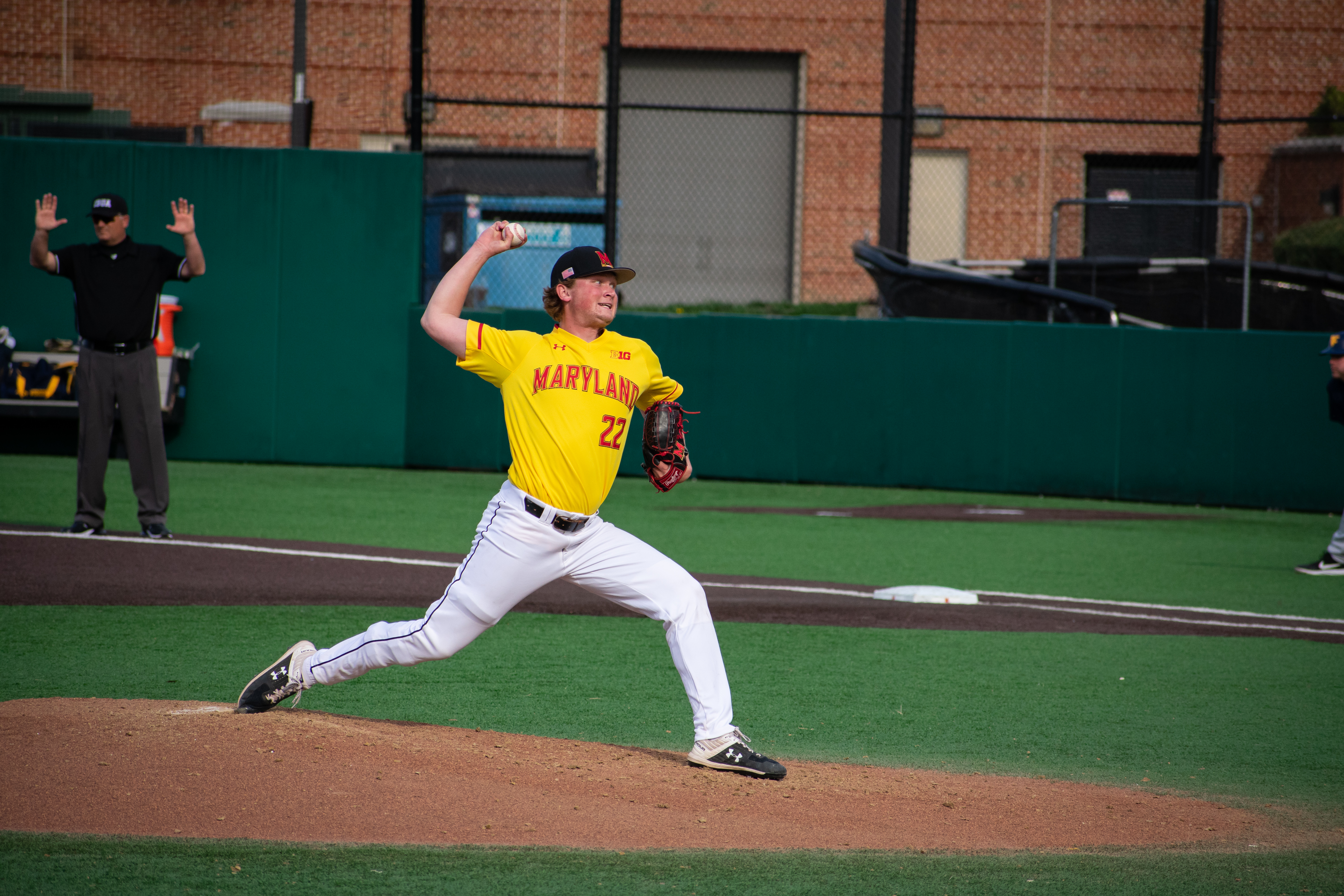 After opening the season with five straight midweek wins, it appeared Maryland baseball’s pitching staff had turned a corner in terms of reliability and depth.

But when coach Rob Vaughn sent right-hander Sean Heine to the mound Tuesday, the fifth different starter for the Terps in midweeks this year, it was on the back of two uninspiring starts last week. Right-hander Tuck Tucker allowed four earned runs in 1 ⅓ innings against William & Mary, and right-hander Nick Turnbull recorded just one out against West Virginia the next day before being pulled.

Heine’s first career start didn’t buck the trend, either, although he managed three innings. He plunked James Madison’s leadoff man and didn’t record an out until the fifth batter with a fielder’s choice.

The rocky beginning, in which the Dukes posted five runs in the top of the first, set the tone for the rest of the way, culminating in a 14-1 loss at Bob “Turtle” Smith Stadium after the first pitch was pushed back when James Madison arrived about 30 minutes before the original start time.

“Shoot, those guys rolled off the bus. They were late getting here, weren’t able to take [batting practice],” coach Rob Vaughn said. “Rolled out, came out swinging the bat really well in the first, came out pumping strikes on the mound. So, hats off to those guys for being ready to play.”

Despite their late arrival, the Dukes’ offense put on a first-inning onslaught, scoring five runs on five hits and batting around against Heine. The Medford, New Jersey, native hit third baseman Trevon Dabney with his first offering.

After reaching first, Dabney went first-to-third on a single from shortstop Fox Semones, who advanced to second base on the throw. In the next at-bat, designated hitter Kyle Novak sent a 2-0 pitch into right field to plate the game’s first two runs with a single.

Heine went on to allow three more runs on two singles and a groundout before striking out the nine-hole batter to end the frame.

“[Sean] just got hit around a little bit,” Vaughn said. “I thought there were some plays we could’ve made behind him to kind of minimize that first inning and cut into that a little bit. But obviously, down six after two’s not quite what you’re looking for.”

When Maryland’s offense came to the plate in the bottom of the first, it quickly needed an answer to counter James Madison’s start. But that response never came, unable to solve right-hander Michael Bechtold.

“I think we had a lot of good at bats today, I think we had just a lot of them get caught,” first baseman Maxwell Costes said. “We never could just put them all together at one time, you know, put a couple runs across. So, you know, that’s just how baseball is.”

Bechtold, who entered the game having surrendered more runs (16) than innings pitched (14.1) and sported a 10.05 ERA, gave up only two hits in four shutout innings.

Vaughn pulled Heine one hitter into the fourth inning, inserting southpaw Billy Phillips into the contest. The lefty managed two shutout innings to stabilize the game before running into trouble in the sixth inning.

James Madison hit back-to-back doubles off Phillips in the sixth to score a run, then added two more when first baseman Brady Harju launched a long home run over the scoreboard in left field.

“Billy hadn’t thrown that many innings in a little while,” Vaughn said. “So I think once he got a little bit more tired and they saw him a second time through, his stuff kind of flattened out a little bit.”

Right-hander Mike Vasturia entered the game to start the seventh inning, but he allowed five runs and retired just one batter before Vaughn dipped further into his bullpen.

Maryland’s offense couldn’t push a base runner past second base until it already trailed 14-0 in the seventh inning.

The Terps’ lone run came on a single from second baseman Benjamin Cowles, driving in catcher Justin Vought from second.

Maryland won’t have much time to reflect on the blowout loss, playing again Wednesday on the road against George Mason at 3 p.m., a contest likely to test a pitching staff that’s struggled in recent midweeks.

“[Vaughn] said we just need to flush this game. Baseball’s a humbling game,” Costes said. “For us to dwell on something like this, that’s just going to kill us for the rest of the games this week.”