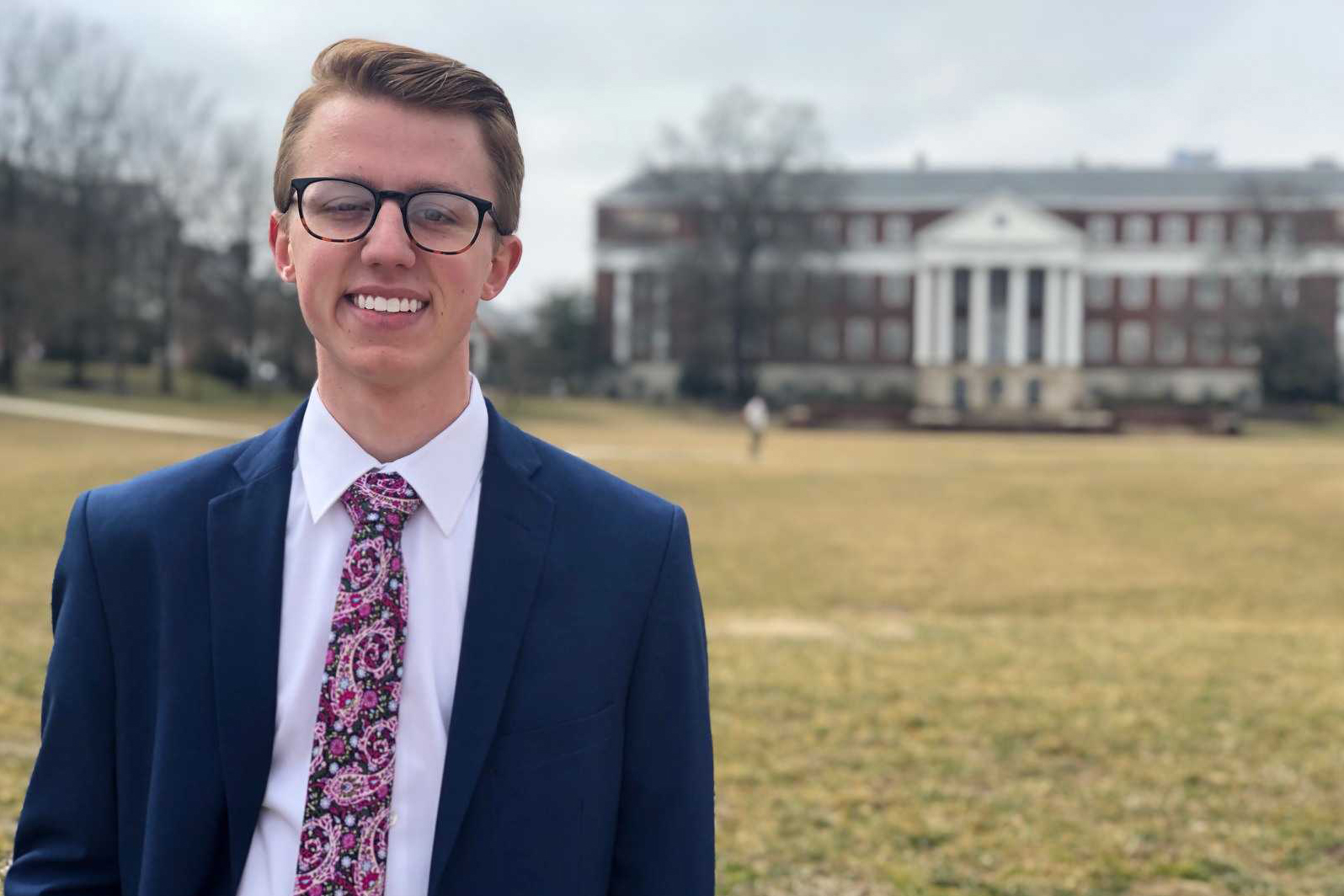 Andrew String, a sophomore economics and government and politics major, is running for SGA president on the YOU Ticket. (Courtesy of Andrew String)

Andrew String first ran for class president as a freshman at Clearview Regional High School in Mullica Hill, New Jersey. In a field of five opponents, he won. And he didn’t stop there.

String was his class president every year of his high school career, and as a sophomore economics and government and politics major at the University of Maryland, he’s running for Student Government Association president on the YOU ticket to bring a voice to students who he said might not be heard in the current government.

“We will make sure the requests of the students will be heard, and we will not sit on our hands,” he said. “We’re not afraid to break that status quo within the governing structure.”

String’s campaign was nearly torpedoed by the YOU Ticket’s rules violations — which String described as “honest mistakes” — but the SGA governance board allowed the party to remain on the ballot.

Getting involved with the Student Alumni Leadership Council — an organization that arranges networking events with students and alumni — has been instrumental to String’s understanding of this university’s values and goals, and he said it taught him the “basic structures of how this university functions.”

String also said he’s had the “privilege” to meet the university’s leaders through his involvement with SALC, and wants to make the information he’s learned accessible to the students he seeks to represent.

“It’s shameful that the undergraduate body is not privy to easily accessible information to understand how the governing structure of this university works beyond student government,” he said.

String is involved with Civicus, a living and learning program focused on community service, political engagement and building leadership. He said this activity was instrumental to his current focus on uplifting voices of marginalized groups.

When he came out as gay his freshman year, he experienced this on a very personal level, and said he is extremely grateful for the community of people who supported him.

“Certain individuals at UMD who I’ve surrounded myself with celebrate diversity and understand the importance of having unique voices heard,” he said. “I want to give back in any way possible to a community that has supported me so much.”

One of the ways he plans to do so if he wins the election is to emphasize collaboration and listen to the students above all in making decisions.

“As leaders, we shouldn’t be arrogant enough to think we know all the answers,” he said.

This year, String started an internship at the Human Rights Campaign in Washington D.C. The over hour-long commute one way is worth it, he said, as his involvement with the organization has exposed him to the “intersectionality of the LGBT community,” and caused him to think about including different groups of people in political discussions than he previously had in what he calls his “sheltered” high school experience.

String proposes the SGA executive board should meet with their university counterparts — the president, vice president of student affairs and provost — on a weekly basis instead of the currently monthly schedule.

Doing so will be imperative during the coming transition in leadership, he said.

“When there is new leadership … we need, as an executive board in student government, to set the precedent to these individuals, saying that, ‘We want to meet weekly. We want you to know what’s going on, since we are the representative of the undergraduate body.’”

He is also a resident assistant in Wicomico Hall, which he said allows him to relate to the struggles of undergraduate students who have to live without air conditioning.

Julia Novick, who served on student government in high school with String, is running for student affairs vice president on the YOU ticket. She has confidence in String’s ability to lead.

“He’s so charismatic. He’s so personable. I think he’d do anything to help people,” the junior english and public health science major said.

Novick said String has been this way since high school, when he won the award for most school spirit. He would frequently show up to games with facepaint and the school flag to inspire others to cheer with him.

“He’s passionate like that,” Novick said. “One of the things he wants to bring here is that same kind of school spirit and passion for Maryland. Maryland has so much to offer, and I wish that we felt more pride in our school sometimes.”

Ellie Litwack, who is running as the engineering representative for the YOU ticket, said she believes in String’s ability to lead, and has witnessed how great of a speaker he is.

“His pep talks have brought me to tears multiple times because you can tell he really believes in what we stand for,” the sophomore mechanical engineering major wrote in a message. “He’s really there to make this school and the world a better place.”