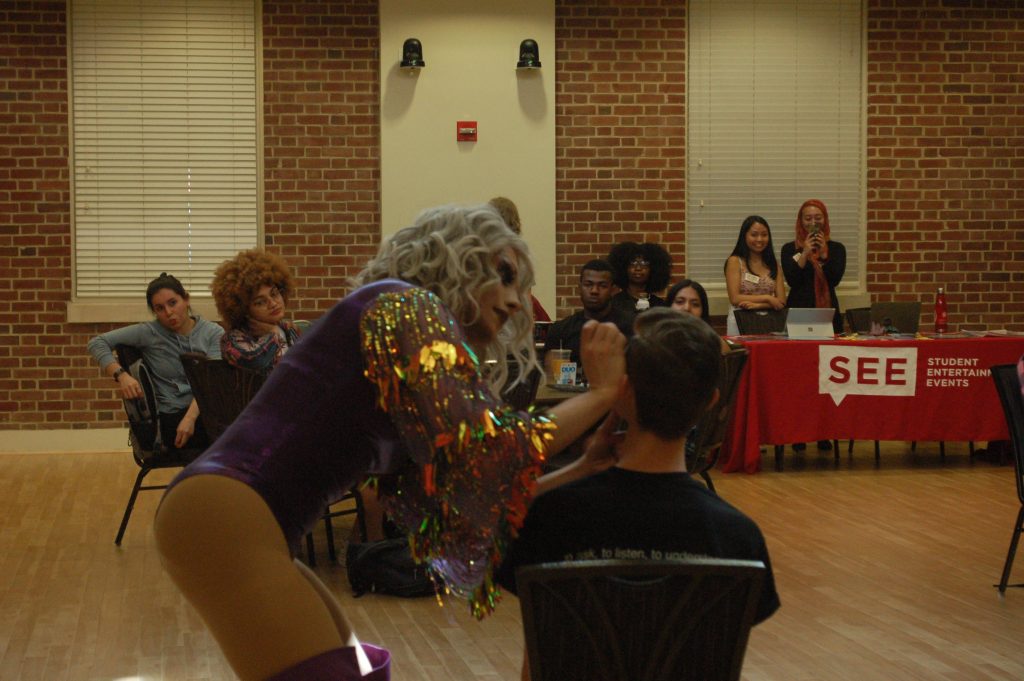 “Can everyone hear my very feminine voice?”

There were some murmurs.

“Rule number one of drag: When you see the queen, clap.”

There were some claps — but not enough. Two more times, the audience had to clap before Venus Valhalla was satisfied. Only then would she get started on her first test subject.

Student Entertainment Events hosted a makeup tutorial, “Drag 101: Intro to Drag,” Wednesday afternoon in the Prince George’s Room in Stamp Student Union, ahead of its second annual Drag Show on Thursday night. Valhalla, a drag queen who often performs in D.C., was the instructor.

Once the audience perked up, Valhalla was ready to give her first lesson. She dragged sophomore James Hogan’s chair to the front of the room, the clacking sound of her thigh-high purple boots filling the air.

After some work with only an Elmer’s purple glue stick and some foundation, Hogan’s eyebrows had disappeared.

“You look like a potato,” Valhalla remarked, after taking a step back to observe her work. Here, it’s meant as a compliment.

Participants were able to use makeup kits in front of them to learn the basics of a true drag look — an eyeshadow technique called a “cut crease,” winged eyeliner, lashes and lipstick.

“I came mainly to have fun, but also to learn more about the makeup process and the attitude you carry yourself with,” he said. “I don’t even know what half this stuff is … but I’m open to a lot of experiences.”

Other crowd members were a little more timid. Some wandered in and out of the room, curious to see what was happening.

Valhalla floated from table to table, person to person, guiding and encouraging everyone to be more daring. When someone’s cut crease didn’t extend far enough out, she told them, “More is more.” When teaching another person how to overline their lips? “More is more.”

“I definitely learned some new techniques that Venus showed us,” Hogan said.

“I feel like a rich aunt,” Pimienta said, while looking in his hand-held mirror.

[Read more: Review: ‘Super Drags’ entertains, but to too small an audience]

SEE was able to provide the makeup through a partnership with cosmetics company NYX. But more importantly, they had to find the talent.

“We really wanted a local queen, and also when talking to [Venus], we knew how passionate she was,” Prasetiawan said. “We wanted someone who shared the same want, the same need, and she was extremely easy to work with.”

“Her presence and just the way that she’s been instructing it has been very welcoming and it just shows that inclusion we’re striving for,” Maliksi said.

As a child, Valhalla loved to watch the History Channel. It helped her learn about other cultures, and she noted the tendency of some cultures to portray something else, such as the Maori people warriors of New Zealand and Japanese geishas.

“The idea that you can change your face or your body in order to create some other sort of persona, or some sort of attitude, has been throughout history for a very, very, very long time,” she said.

Valhalla uses the name Venus as a symbol. The planet is one of the brightest objects in the sky, and its surface is covered with lava and volcanoes.

“I relate to being fiery on the inside but so beautiful on the outside,” she said.

Drag is a way to enhance one’s confidence, she said, in the same way a man might wear a suit to work or a woman may wear a nice dress on a date.

“All of that is drag,” she said. “And just because I put it all on at once doesn’t make it any different from someone who just puts it on pieces at a time.”