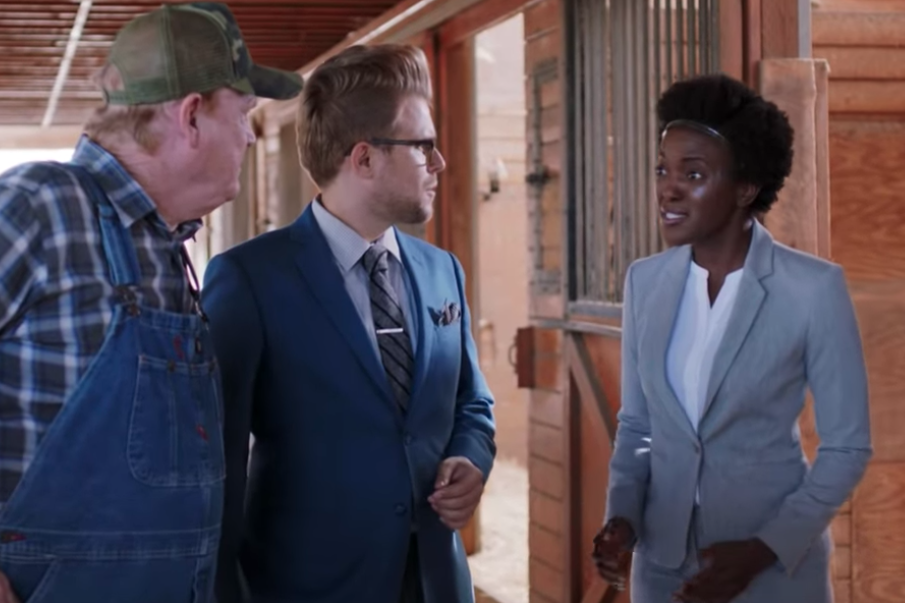 Adam Conover (middle) in the 'Adam Ruins Everything' trailer. (Photo via YouTube)

Even if you’ve never heard of Adam Conover, you’ve probably heard his voice or seen him on YouTube. The New York-born writer, comedian and host of his own show Adam Ruins Everything on truTV seems to have done it all in the past couple of years.

He started as a sketch comedian for CollegeHumor, writing and acting in their hugely popular YouTube channel that now has over 13 million subscribers. After first starting the concept of him, well, ruining everything on the CollegeHumor channel, he took his unique, informational-style comedy act to truTV, where the show is now in its third season.

Now Adam is embarking on another endeavor with his new live comedy tour, Mind Parasite LIVE. With an upcoming show at the 9:30 Club on April 13, he sat down with The Diamondback to chat about his tour, his comedy style in today’s world and his unapologetic stance on telling the truth. Our conversation has been edited for clarity and length.

Your show is described as “informational sketch comedy,” and focuses on educating people on untold — sometimes, unsavory — truths about the world. Do you ever feel any guilt or burden on bursting bubbles for people, despite knowing it’s probably in their best interest?

None at all. Absolutely none. I feel no guilt or remorse. My motto — both on our TV show, and in life — is that it’s always better to know. There’s absolutely no virtue in ignorance of any kind whatsoever.

We have arguments in our writers room. We had a joke in an early season about Santa Claus not being real. My character on the show tells the kid Santa Claus is made up and the kid is upset. But one of the writers was like, “Well look, actual kids are probably going to watch this … it might tell them that Santa Claus isn’t real. And that might be upsetting.” And I was like, “I don’t care. That’s great.” If we are the ones who tell people Santa Claus isn’t real, all the better, because it’s the truth.

What’s your philosophy on using comedy as a vessel for truth?

I think that comedy is a perfect vehicle for the truth. There’s something about the way comedy works on people that makes them more open to the truth. When you watch a stand-up comic and they say something that makes you go, “Oh, yes! Yes, that is true!” You laugh.

When people are laughing, their defenses are down and they’re most truly themselves. In that moment of laughter, you can plant a little seed of a new idea.

Do you ever feel like people try to discredit the informative work that you’re doing because you do it in a non-traditional format?

There are certainly tons of people out there who have [ideologies] against the ideas we’re getting across on the show — and rather than opening their mind, they want to play defense and bite back. There are also lots of people who level valid, interesting criticisms against our show. When they do that, we take those seriously; that’s why we’ve done corrections episodes on the show.

That sort of give-and-take is absolutely part of the process. We have a research staff of six. They’re researching all of our segments exhaustively. Of course, sometimes, you know, something slips through and you need to address it later. That happens. And the reason we’re transparent about it is that we think — and hope — it increases our audience’s trust in us, because they see, ‘OK, these folks are really trying to do their best here and do justice to the truth.’

[Read more: Review: Season two of ‘Barry’ is off to a hilarious, suspenseful start]

But there are people who are so ideologically against one of the ideas. Sometimes it’s political, sometimes it’s because they’re particularly attached to a certain piece of misinformation. A good example is when we did a segment on why the moon landing couldn’t have been faked. It would’ve been harder to fake it. Now there are people who have made YouTube videos, “Here’s why Adam is wrong.”

Those people are going to exist, no matter what we do. I’ve always tried to reach those people. But at the end of the day, I sort of have to say, well, that’s not really our audience, people who are that close-minded. We’re trying to reach the other 99.9 percent of people who are more open-minded, who are rational and logical and are interested in new ideas.

The critics sometimes say, “that guy is just a comedian.” To that, I say yeah, granted, I never claimed to be more than a comedian. But I have a really wonderful research staff and that staff is made of journalists, people from the world of science.

So when people say, “Oh, he’s just a comedian,” I don’t really think that is a rebuttal against what we do. I don’t think having a certain job title is a prerequisite of engaging with information or trying to seek the truth in the world.

What is the most shocking or surprising reaction or backlash you’ve gotten from any subjects of an episode?

Here’s the funny thing — no businesses ever go after us, really. Because when we talk about these topics we’re covering, we don’t break these stories. Our basic method is to find stories that have been covered by journalists and scholars and writers, but we just haven’t heard about.

The ones where there seems to be a backlash comes a lot from more surprising angles. The one that was most shocking to me was when [we] did an episode on dating and alpha males. With humans, it’s completely not based in biology, and not based in animal behavior.

Any sociologists, anthropologists or human psychologists, none of them would say there is such a thing as alpha males in humans. It simply does not exist. It’s an unscientific idea and honestly, it was almost hard to fill that segment up with enough information because there wasn’t even that much to debunk.

We got so many angry right-wing YouTube response videos. I was struck by that because I was like, how is this a right-wing issue? This isn’t like we made a video about Planned Parenthood. These right wingers were like, “Oh, Adam Conover hates men and is trying to, like, destroy manliness” and people are calling it a “left-wing video.” I have no idea why.

Apparently, the idea of an alpha male has somehow become embedded in a certain strain of really out-there, right-wing ideology, and I don’t really understand why or how. It kind of bummed me out because this is a very simple idea. These guys were tying themselves into knots trying to explain why it is scientific in these ways that didn’t even really make sense.

What advice would you give to those who find themselves sharing unsavory truths detrimental to their social lives?

I used to bother people with this information earlier in my life. People would roll their eyes when I started [saying], “Yeah, I read an article about this.” The origin story of the show was, I was working in CollegeHumor and I had written a sort of political sketch like this earlier. Everyone in the writers’ room was kind of like, “Oh my god, this is so pedantic.” And so I just wrote them into the sketch, in order to sort of basically save my own ego, right? If I deflect that, they can’t make fun of me if I’m making fun of myself.

That ended up working really well. So self-deprecation is, always, always a good way to defuse this sort of thing.

People really do love learning. You know, the trick is to figure out how to share that information with people in a way that’s not going to bump them emotionally, right, if someone says something that’s incorrect, right? It’s just don’t be a jerk, I guess.

How will you be translating the high-speed, meticulously made format of the TV show into a live format?

One of the challenges with the tour is when we’re doing Adam Ruins Everything, we’ve got a creative staff close to 15 people. I’m working on the show, and the live show is much more my voice, me, coming across. I did bring on some Adam Ruins Everything researchers and writers to help me get the show started.

I’ve been working on this show for close to a year now, which is a lot longer than Adam Ruins Everything. We write those episodes in, I want to say two, three months.

So this one, I’ve really been sitting with for a long time. I’ve been working it out at different venues. It’s just a different way of creating the material. What I’m trying to do is combine a stand-up show and the way I work as a stand-up comic with that informational educational approach that I do on Adam Ruins Everything.

It’s interesting because it’s really a brand new format for a show. But the real focus is on doing stand-up. So I opened with a couple sort of traditional stand-up jokes, and I sort of ease my way into the material. The best thing about stand-up is that it’s a conversation. You don’t get that with Adam Ruins Everything. Whereas this show, I’m right there with you. I am experiencing it as you’re experiencing it, and giving you my take on it right away. It’s meant to be a much more sort of loose, intimate experience, which leads to a whole different kind of funny.

People are going to learn a lot, they’re going to laugh a lot. It’s sort of a combination of, like, a psychedelic biology class about these super weird parasites that control the minds of their hosts, and use that as a way to talk about the cultural parasites that are seeking to control our minds.