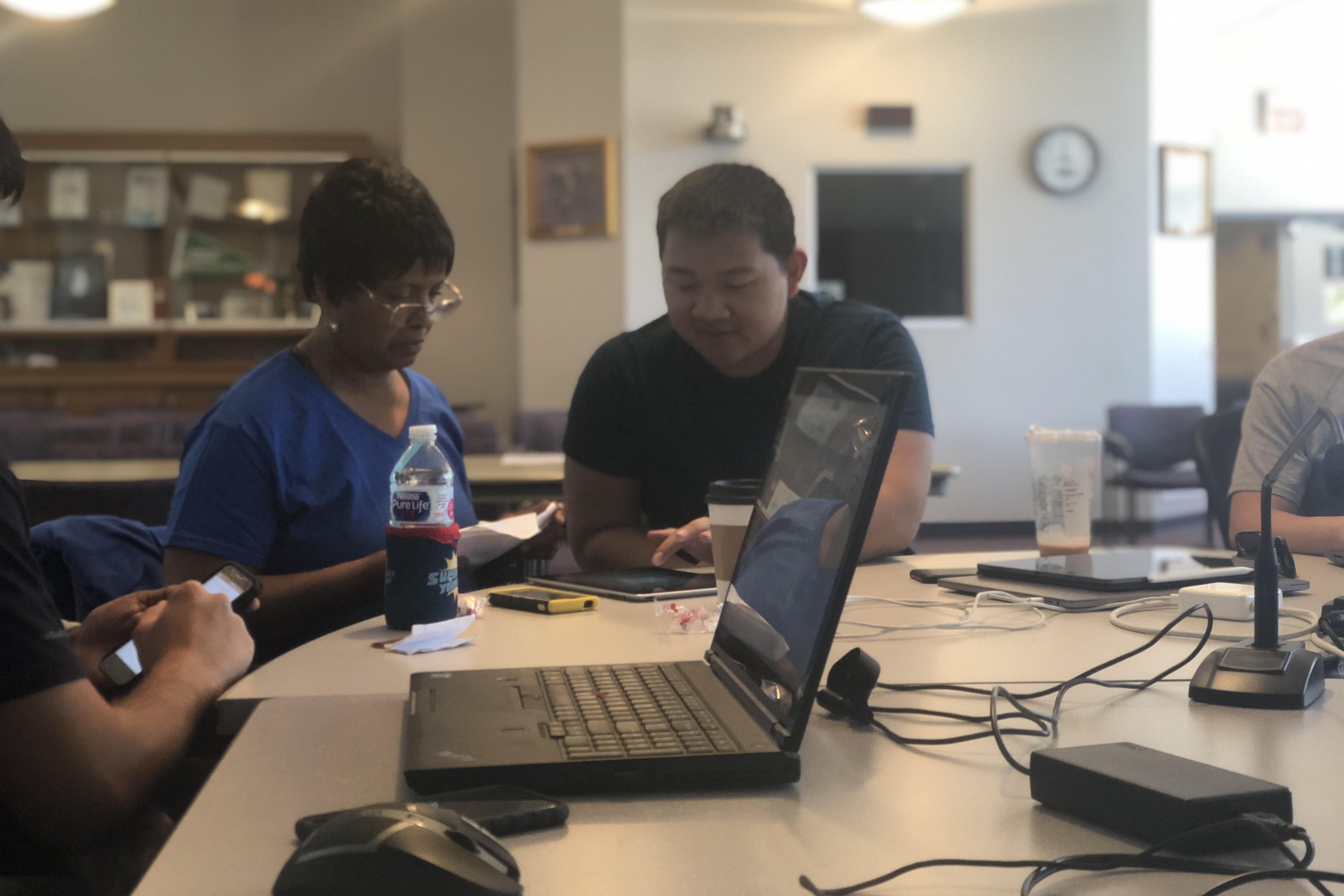 College Park Scholars in Action hosted its first tech help center for senior residents of College Park on Saturday, hoping to build a bond between University of Maryland students and the community.

While the Apple Genius Bar-styled event was open to anyone, Scholars in Action — a club that organizes service opportunities for Scholars students — chose to target seniors specifically, coordinator Maggie Fritz said.

“A lot of times, younger people see technology and age as a barrier — as two separate things,” the junior environmental science and policy major said. “And that’s not really the case, as we’re seeing here: it’s an opportunity for connection.”

[Read more: College Park residents now have a spot to drop off their food scraps]

Fritz helped organize the event with District 3 Councilman John Rigg, who said the need for an event like this was clear to him.

“It’s a service model that I think is sorely needed and is very valuable to our residents,” Rigg said. “And I know from my own experience with my neighbors … that there’s probably a great unmet need for that type of service.”

College Park Woods resident Alice Tyler was one of about 20 people who came to the event for help. She spoke with a student for an hour on how to use her “bothersome” smartphone.

“I have to text, because I have grandchildren and that’s the only way they communicate,” Tyler said. “But I’m getting better. And coming here today was really freeing for me.”

The freshman computer science major who helped her, Cheyenne Montgomery, said the experience wasn’t too different from the help she gives her own grandmother. The main issue that Tyler had was navigating apps she had already mastered on her computer, like Facebook and messaging, Montgomery said.

Like most of the students in attendance, Montgomery had a STEM background. And even though the help Tyler needed wasn’t too technical, Montgomery appreciated being able to use the knowledge she had from her computer science classes in a practical way.

“She asked me why sometimes our phone is so slow. You know, like RAM and everything — we learn about that in some of our classes,” Montgomery said. “So I tried to explain it to her in a really simple way.”

David Tomblin, director of the Science, Technology and Society Scholars program at this university, hoped the event could help take more introverted STEM majors out of their shells and remind them to keep in mind the human side of the devices they’re working with.

“To me, this was a great opportunity to do two things,” Tomblin said. “One, just interact with regular people that actually struggle with technology and hopefully help them learn. But two, it gives the students a sensitivity about like — if I go and design something, and I try to do it only from my perspective, what kind of things am I leaving out?”

Rigg said he also felt the event helped bring together residents and community members that rarely interact, and sometimes conflict.

Rigg and Fritz are already considering turning the workshop into a regular service event — potentially once a year, or once a semester.

“If this is done again, I’ll be back,” Tyler said.