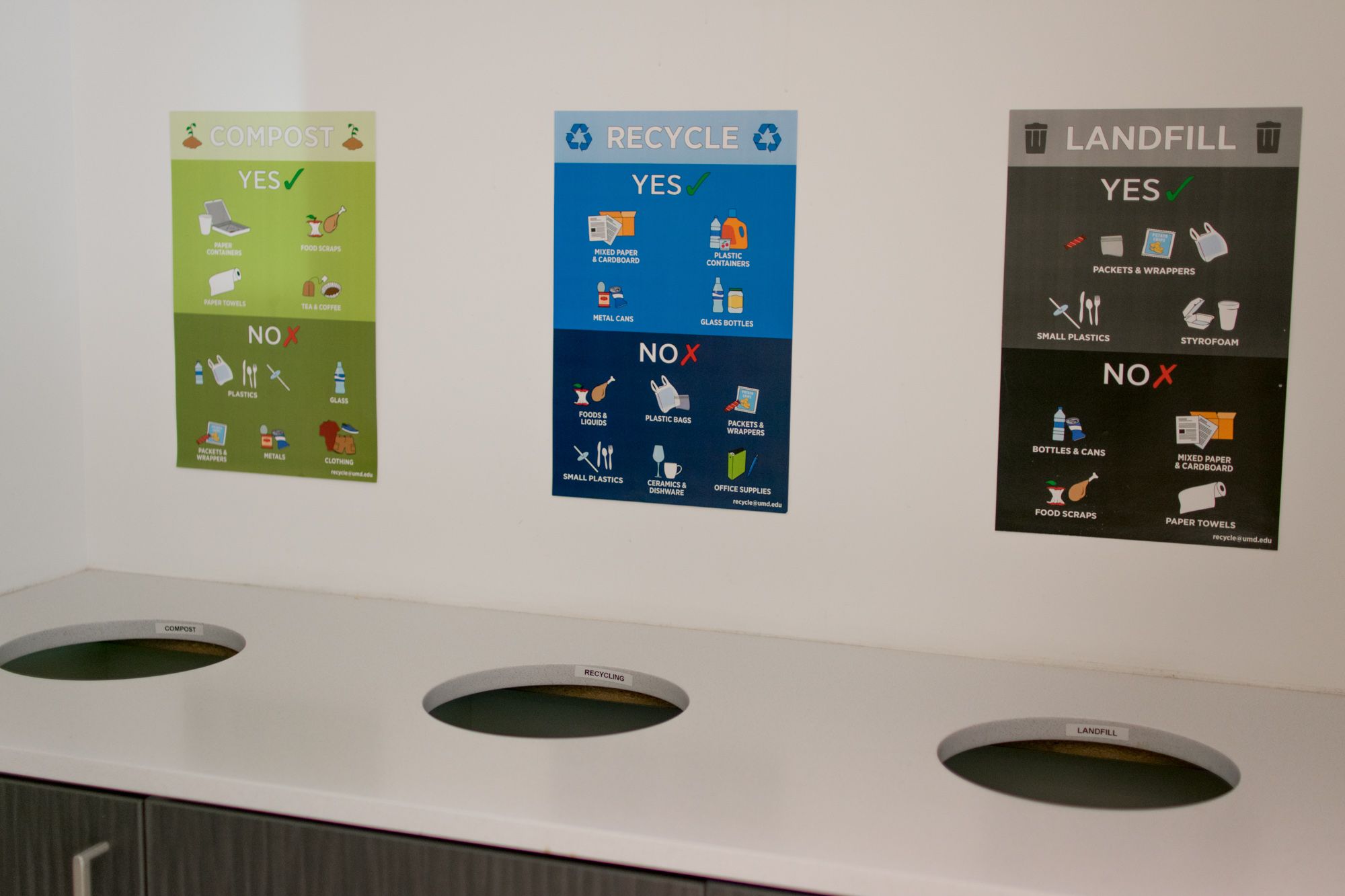 Various bins throughout campus encourage the proper sorting of trash, recycling, and compost and spread awareness about sustainability.

College Park started a program Monday for residents to drop off their compostable waste at a city building.

The pilot program enables residents to drop off their leftover food scraps and food-soiled paper waste at Davis Hall, which is located in North College Park. The city passes off the waste to a collection group called the Compost Crew, which will come once a week to deliver it to a facility in Upper Marlboro for processing, said Janet McCaslin, the city’s sustainability coordinator.

The public works department set up a bright yellow compost cart, which is accessible 24/7, in the parking lot outside Davis Hall with signage of what can and cannot be composted in the bin. The city has also offered free five-gallon compost buckets for the first 50 residents who claim them.

As of about 2 p.m. Tuesday, about 20 people had come by Davis Hall to grab buckets to compost at home, McCaslin said. When she checked in on the bin Tuesday afternoon, the 35-gallon compost cart was about halfway full, she added.

“Each one of them have raved about how they’re so happy that we initiated the program so that they’d have a place to be able to bring their food scraps,” she said. “We know, it’s not much to begin with, but we’re pretty happy with that response so far.”

The idea for the initiative began about two years ago, when residents asked the city for a curbside program to pick up waste that could be composted, McCaslin said, but it was “pretty expensive.” Instead, College Park started a backyard composting program in which residents could purchase a bin for their decomposing refuse for $20.

“That was kind of phase one,” McCaslin said. “And that went over very well. We sold many of those for a very reduced price to residents.”

Davis Hall is the program’s primary drop-off location, and the city plans to set up more locations at farmers markets in North College Park and downtown College Park, with opening dates and addresses to be determined, McCaslin said.

The success of the current phase will determine the city’s steps forward, such as deciding to further expand the program to other locations in the city, or create a curbside pick-up program, McCaslin said.

Some residents aren’t as enthusiastic about the program.

Carol Nezzo, a 31-year city resident, stopped by Davis Hall to check out the bin. Though she initially thought “it’s about time” the city actively promoted composting, she said the drop-off location is inconvenient for residents — but the idea is “going in the right direction.”

“We need help to do it in our own neighborhood,” Nezzo said.

Other residents, such as university alumna Jenna Norwood, hadn’t heard about the program but thought it was a “good first step” for the city.

Norwood has composted for nearly 20 years, and now that she knows the city has a drop-off location, she said she’ll likely visit it at least once a week.

“I am passionate about compost, and it stresses me out if I don’t have a place to take it if I’m living in an urban environment,” she said. “I just collect it until I know I’m going to go find some woods somewhere, and then I just kind of bury it under some leaves, and then hope for the best.”