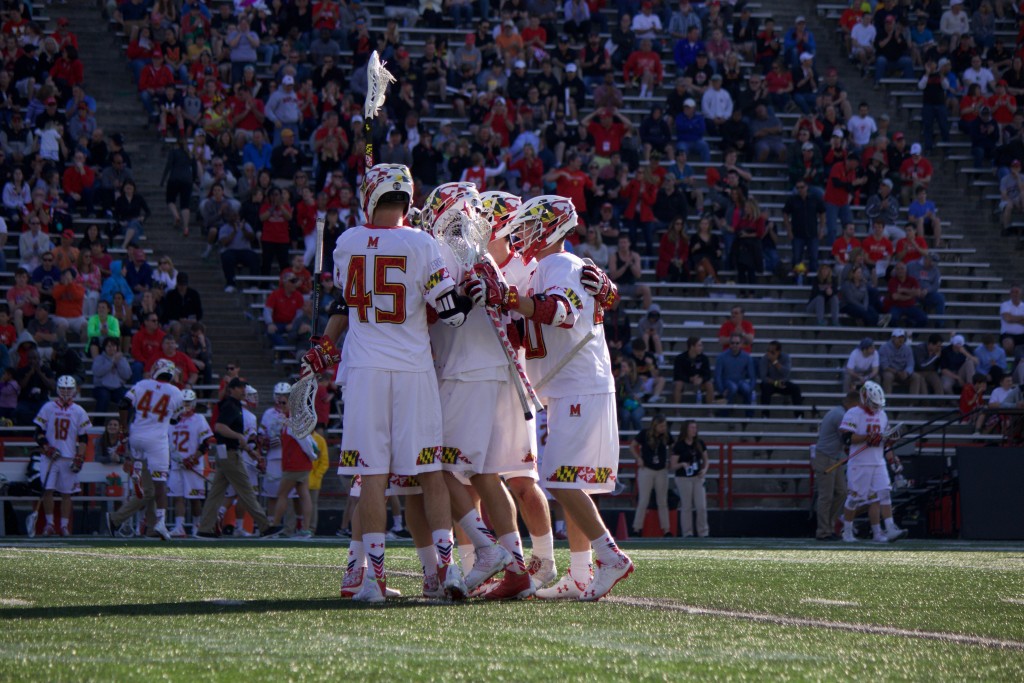 The Terps celebrate a goal when they defeated Rutgers, 11-8, at Maryland Stadium on April 16, 2016. (Matt Regan/The Diamondback)

Against a Michigan team notorious for its hounding defense, Maryland men’s lacrosse knew where to strike.

After faceoff specialist Austin Henningsen won the first draw of the day, he quickly retreated to the Terps’ defensive end and passed the ball off to goalkeeper Danny Dolan. Defender Curtis Corley received the next pass, and instead of initiating a conventional clear attempt, he fired a shot from almost 70 yards away from the Wolverines’ net, missing wide left.

That sequence, just over 10 seconds into the game, offered a glimpse of Maryland’s strategy to deal with Michigan’s aggressive faceoff and riding tactics.

Whether through a 10-man ride or its attacking style on faceoffs, the Wolverines tries to make life difficult for their opponent. But the Terps prevailed despite those circumstances, willing their way to their first Big Ten win this season.

“It certainly wasn’t a work of art,” coach John Tillman said. “But the effort was awesome. I thought the guys really battled.”

[Read more: No. 3 Maryland men’s lacrosse bounces back with 16-12 win over Michigan]

With the Wolverines turning to an inexperienced player in the X, the team employed a different game plan to gain possession in that critical area.

“They kind of almost concede trying to win the initial faceoff,” Tillman said. “It’s more, ‘All right, we’ll have a defenseman out there, and chase your guy. And see if we can kind of create another loose ball and then see if we can get that.’”

The Terps saw that ploy work in Michigan’s favor on the second faceoff Saturday, as Henningsen appeared to have a win before he failed to scoop the loose ball with the pressure applied on him.

[Read more: Maryland men’s lacrosse hopes a day off will lead to a revitalized effort against Michigan]

But Maryland adjusted, winning 25 of 32 faceoffs on the day. For 24 of those wins, the faceoff unit had to come away with a ground ball to gain possession.

Michigan’s other method of disrupting the flow of games is a 10-man ride, in which all 10 players on the field — even the goalie — are used to defend players and areas to prevent clearances. In this aggressive look, as the goalie defends the clear, he leaves his net vacant.

Maryland, the ninth-ranked clearing team in the nation entering the game, was successful on 30 of 34 clears against Michigan’s 10-man ride. Multiple times, defensive players resorted to firing long shots at the empty net to clear the ball.

Midway through the fourth quarter, defender Matt Rahill received a pass and shot from 50 yards away. The ball found the back of the net, all but ending Michigan’s chances of a comeback.

“They’re very committed to [the 10-man ride],” Corley said. “They sell out, [they’re] all-in to their 10-man ride. So we just gotta know our looks, and we executed it decently today.”

When the Terps did experience trouble — such as in the third quarter, when they turned the ball over seven times and had two failed clears — attackmen Jared Bernhardt and Logan Wisnauskas led them out of it.

As Maryland committed those miscues, Michigan pulled within two scores at the end of the third quarter with a 3-0 scoring run.

To start the final frame, the Terps enjoyed a 4-0 run to extend their lead back up to six. During that stretch, Wisnauskas scored once and Bernhardt scored twice, with Rahill’s long-pole goal capping off the run.

Tillman said the physicality during last week’s game against Penn State forced the coaches to use more walkthroughs than live repetitions in preparation for Michigan.

While he thought the lack of contact during the week was apparent in Saturday’s outing, he was pleased with the drive his team showed to combat Michigan’s unique style of play.

“I didn’t do a very good job with our guys today, certainly in getting them prepared in a lot of different areas, and that’s on me,” Tillman said. “So I’m really proud that the guys did such a good job with their effort, and that really kind of made the difference.”