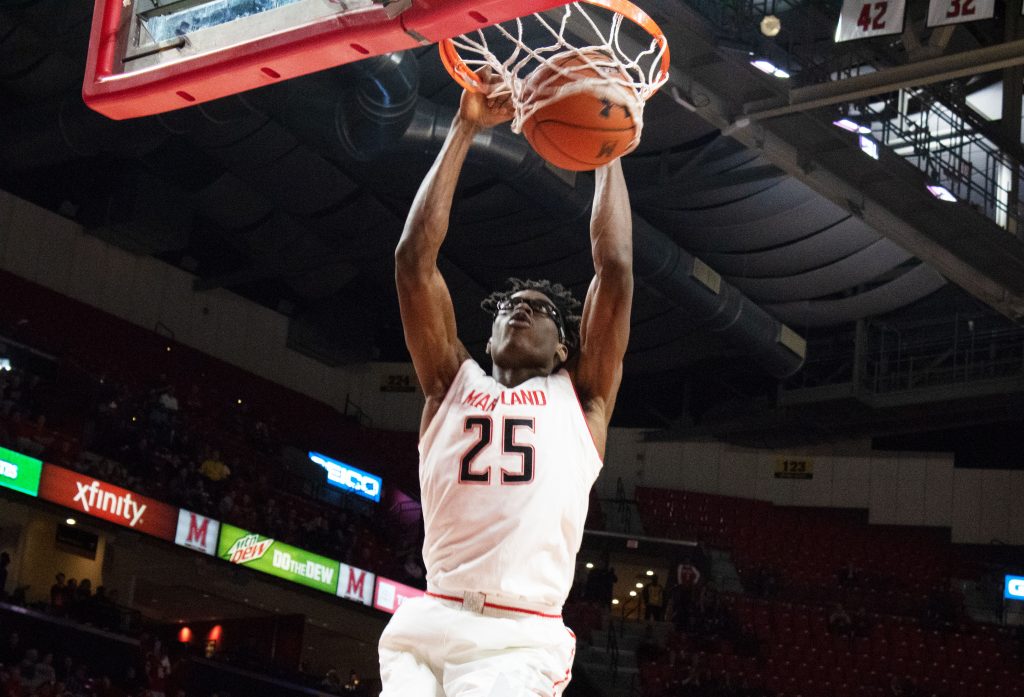 Smith, who entered his freshman year as a McDonald’s All-American from Mount Saint Joseph in Baltimore, had an up-and-down first year. But Smith was pivotal in the Terps’ first-round NCAA tournament win over Belmont, scoring 19 points on 8-for-9 shooting and reeling in 12 rebounds.

He tallied 15 points — including a game-tying 3-pointer with 28 seconds left — in Maryland’s second-round matchup against LSU, before guard Tremont Waters’ knifing drive to the rim ended the Terps’ postseason.

“This past season was an amazing experience and I can’t wait to see what the future has in store for our team,” Smith said in a release. “I’m appreciative of Coach [Mark] Turgeon, the staff, my teammates and Terp Nation for all of their support.”

Maryland won 11 of the 12 contests when Smith scored at least 15 points, with the season-ending defeat as the lone discrepancy. But before a standout performance in the tournament, Smith had a habit of disappearing in big games. He averaged 8.5 points in Maryland’s 10 losses prior to March Madness.

Smith finished with eight points and just one offensive board against Nebraska in the Big Ten tournament, one of many Terps to underwhelm in the early exit. And in the thick of conference play in February, Smith had a four-game stretch where he didn’t reach double-digit points.

Oftentimes, Smith’s lack of production seemed rooted in mismatches where he was outmuscled. So, after losing 69-55 to Michigan State on Jan. 21, in which Smith scored six points on 3-for-8 shooting, the forward began extra strength workouts to improve his finishing down low against formidable matchups.

[Read more: Maryland men’s basketball comes up short in heartbreaking 69-67 loss to LSU in Round of 32]

The plan seemed to undergo various degrees of success. Against Wisconsin on Feb. 1, Smith scored five points and pulled down just four rebounds, rooted to the bench with foul trouble for large chunks of the loss. But his next two games, wins over Nebraska and Purdue where he combined for 34 points, seemed to display his potential.

He backed it up with an impressive performance in the NCAA tournament, especially against LSU’s frontcourt — likely the toughest matchup for he and sophomore forward Bruno Fernando this season.

“Jalen did so many great things for our program this season and his potential was on full display in the NCAA Tournament,” Turgeon said in a release. “He has the opportunity to take his game to another level as he works with our strength and coaching staff this offseason. Jalen is a special individual from a great family and we are excited to have him return to College Park.”

Smith has often been reminded of his frontcourt partner’s decision last year. Fernando decided to return to Maryland for a second season and saw his NBA stock soar, although Fernando’s decision regarding the NBA Draft remains to be announced.

“A lot of people tell me to look at Bruno, him coming back,” Smith said March 22. “I know he took that path, and maybe my path will be the same, maybe it won’t be the same. But I’ll just do what’s best for me and best for my team.”

Smith’s return ensures the Terps’ impressive freshman class stays together. The group accounted for 50 percent of Maryland’s minutes and scored 47 percent of its points this season. Smith averaged 11.7 points and 6.8 rebounds per game, earning him a spot on the Big Ten All-Freshman team.