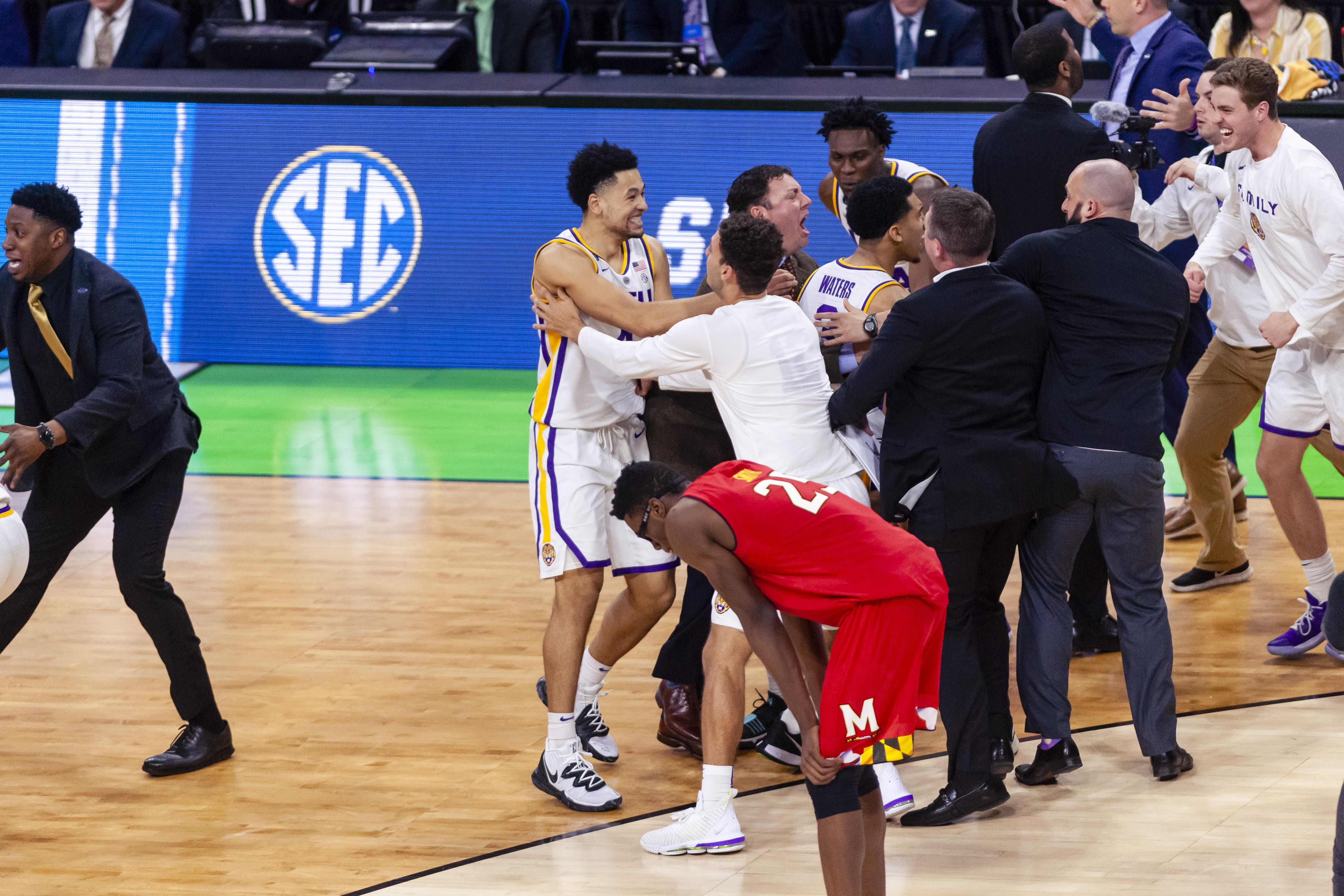 Forward Jalen Smith stands in shock while LSU players celebrate after the final buzzer of the No. 6-seed Terps' 69-67 loss to the No. 3-seed Tigers at VyStar Veterans Memorial Arena on March 23, 2019. (Photo courtesy of Mitchell Scaglione/The Daily Reveille)

JACKSONVILLE, Fla. — For several agonizing seconds after the final buzzer Saturday, most members of the Maryland men’s basketball team hardly moved, keeling over in place on the VyStar Veterans Memorial Arena floor.

LSU guard Tremont Waters was also struggling to get off the court. He was stuck at the bottom of an impromptu dogpile in front of the Tigers bench, having just sent his team to the Sweet 16.

After Maryland eked out a first-round win over No. 11-seed Belmont, coach Mark Turgeon repeatedly emphasized that the game could’ve gone either way. Against No. 3-seed LSU, the No. 6-seed Terps learned the hard way how fickle March Madness can be, as Waters’ layup with 1.6 seconds left dealt them a heartbreaking 69-67 defeat in the Round of 32.

“We showed [the team] exactly what was going to happen. We showed them middle ball screen for him,” Turgeon said. “Kid just made a heck of a play.”

The teams were only deadlocked entering the Tigers’ final possession because of back-to-back 3-pointers, the type of shotmaking that hadn’t been on display for most of the day.

With the game tied at 64 entering the final minute, LSU forward Skylar Mays buried a deep triple, just the third of the half for his side. Then, out of Turgeon’s final timeout, guard Anthony Cowan found forward Jalen Smith in the corner, and the freshman connected after missing his first four three-point attempts.

“[The plan] was kind of for Anthony to make a play,” guard Eric Ayala said. “And he made a great one.”

It was another highlight for Smith, who was Maryland’s best player in the tournament. After notching a double-double in the first round, the Baltimore native had a team-high 15 points against LSU, and his defense as one of the anchors in a 3-2 zone helped change the game.

After Turgeon was called for a technical foul four minutes into the second half, Mays hit both free throws to put the Tigers up 15 points. Then, the Terps switched to their seldom-used zone, and LSU was stumped.

The Tigers are built around inside scoring, yet they settled for 3-pointer after 3-pointer, falling into the same trap Maryland had struggled through in the first half.

“When they made the change, we got stagnant,” Tigers coach Tony Benford said. “And they made shots.”

From the opening tip, Terps couldn’t guard LSU in their traditional man-to-man defense, and those struggles combined with poor offense early to allow the Tigers a 15-point lead. Maryland had a season-high 18 three-point attempts in the first half and made just five, with two coming from guard Aaron Wiggins in the final minute-plus to cut LSU’s advantage to 38-29.

After Turgeon’s technical, though, the offense found a better balance — and more success.

Cowan, who was 1-for-6 before halftime to open the tournament 4-for-24, nailed a pair of 3-pointers and helped force a turnover that completed an 8-0 run and slimmed the deficit to 46-39. He finished with 11 points, one of five Terps in double figures.

The Tigers pushed the lead back to 10, but poor three-point shooting — they missed 11 of their first 12 after halftime — opened the door for Maryland.

“We’ve been like that all year,” Cowan said. “We just never stop fighting.”

Smith, Ayala and guard Darryl Morsell all scored to cut the lead to five with about 12 minutes left, and Smith drained two free throws to cap eight straight points and put the Terps ahead, 57-55, about six minutes later.

Leading by two with less than two minutes left, the Terps forced a pair of close-range misses, and a mass of bodies from both teams fought for the rebounds. Maryland couldn’t corral possession, and when Mays was fouled on a third attempt, he tied the game again at the foul line, part of his game-high 16 points.

Then, Ayala missed a wide-open look from deep, and Mays nailed his lightly contested one with 36.8 seconds left, ensuring a 2-for-1 opportunity.

Smith provided the best possible answer to Mays’ triple, but it still left the Terps unable to get the ball back, putting their season at the mercy of an opposing playmaker for the second straight game.

Unlike Belmont, the Tigers didn’t miss the opportunity. Reid set a high screen, and Waters snuck past Smith and got the shot off before Fernando could come over to swat it.

Maryland had entered the tournament under significant pressure, with Turgeon at risk of going three years without a postseason win despite having at least three NBA draft picks during that span.

The close win over Belmont is likely to quiet the near-annual calls for Turgeon’s firing, and having the fourth-youngest team in the country is a more valid explanation for perceived underperformance than some he’s trotted out in the past.

But that doesn’t ease the pain of limiting an opponent to 19 points in the first 15 minutes of the second half, only to see the game-winner fall in without any time to answer.