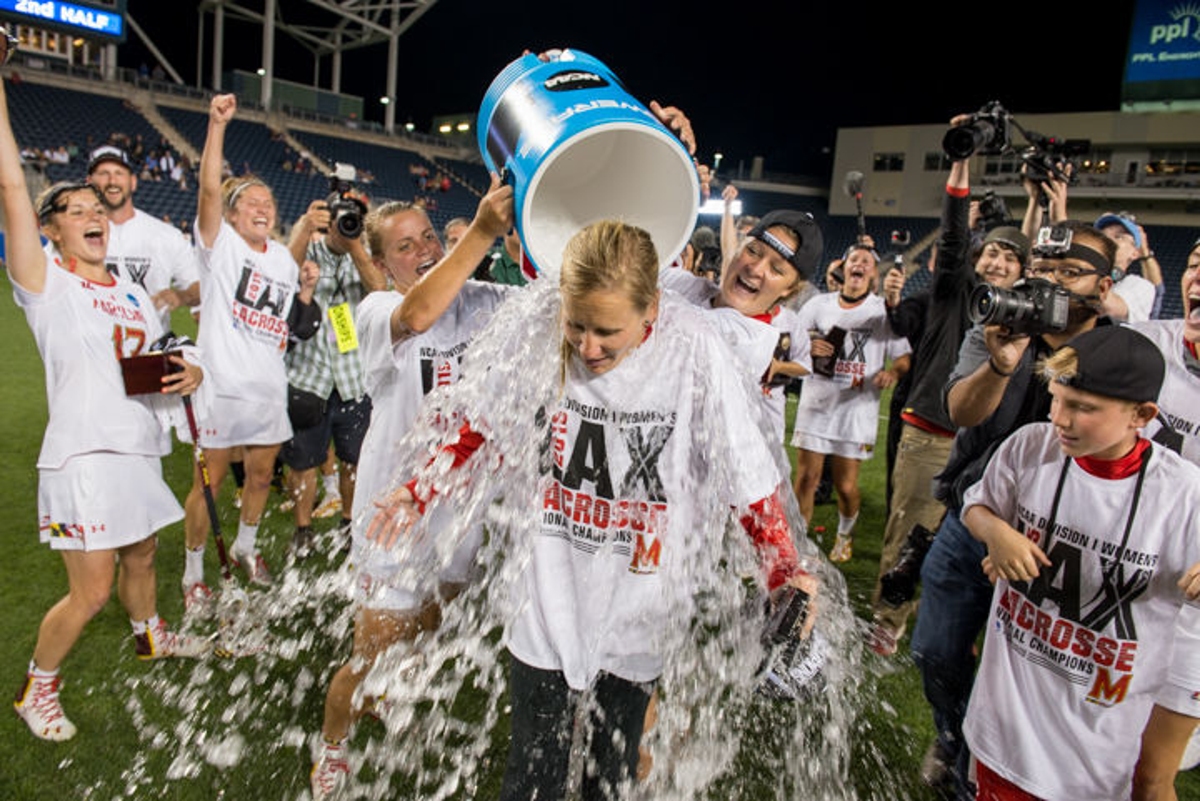 The women’s lacrosse team dunks a bucket of gatorade on coach Cathy Reese after Maryland’s 9-8 win over North Carolina in the NCAA tournament at PPL Park in Chester, Pennsylvania, on May 24, 2015.

Following the Maryland women’s lacrosse team’s 16-6 victory over Virginia on Wednesday, the normally rambunctious postgame huddle was deathly silent. As soon as coach Cathy Reese joined her players, she noticed something was off.

“Why do you guys seem so awkward?” Reese asked.

The ruse was up. Attacker Maggie Root and defender Julia Braig began jumping up and down. The silence was shattered by cheers, and Reese couldn’t stop smiling. With the emphatic win over the Cavaliers, Reese became the winningest coach in program history, surpassing a record set by her predecessor, mentor and former coach Cindy Timchal.

After her 261st win as the Terps’ head coach, Reese put her arm around defender Meghan Doherty and addressed the team. She once again distanced herself from all that success — even though she’s been the team’s constant during those 13 years — to instead give the credit to her players.

“The reason we get to celebrate is because we have a team of great players,” Reese said in the huddle before pausing slightly. “I love all of you guys!”

Over 22 years with the program — four as a player, five as an assistant and 13 as head coach — Reese has established herself of one of the great Maryland coaches. And she’s not done yet.

After pummeling No. 8 Virginia to maintain an undefeated record, her 2019 squad appears primed to add to her accolades.

Reese has won four national titles while in charge of the Terps, the first of which ended a nine-year drought marked by Timchal’s departure in 2006. Timchal, now at Navy, won eight championships while at Maryland. Reese was an attacker for four of those titles and joined as Timchal’s assistant for another three.

So far, this year’s squad features the best defense of any of Reese’s title-winning teams, allowing just 6.7 goals per game. The Terps are beating opponents by an average of 9.4 goals, too.

The consistency has stemmed from a winning culture bred throughout Reese’s career, helping her recruit some of the best players on the East Coast.

“It’s been amazing to play with my best friends and play under such an amazing coaching staff here,” midfielder Meghan Siverson said.

When Reese inherited the job, she had a tough act to follow. Timchal had taken Maryland from a program with only one NCAA title to a perennial contender.

However, Reese fit in seamlessly, building on her understanding of the program and her “live in the moment” philosophy to continue Timchal’s legacy. It took Reese just three years to reach the final four and another to win a national championship.

Since Maryland’s 2010 title — a 13-11 victory over Northwestern — Reese has made every single final four, advanced to the national championship six times and brought silverware back to College Park on three occasions.

“For her leading the program and watching Maryland play in the years since I have left, she has done an amazing job,” Timchal said in a statement. “There is no better time for her to break the record that I set than right now with her remarkable team.”

Not all of Reese’s seasons have ended in glory. In 2018, after completing the regular season with a one-goal loss to North Carolina as the only blemish on its record, Maryland went scoreless for 14 minutes against Boston College to lose in the semifinal.

“I like when [the clock] reads zero and we are on top, rather than not on top,” Reese said. “We’ve had that a few times, too.”

This year’s squad is largely unchanged from last year’s group, so most of them have last year’s disappointment in the back of their minds still. With Reese at the helm and the team 13-0, the Terps appear on track for revenge against the No. 1 Eagles.

[Read more: With 16 points in her last 4 games, Brindi Griffin has been a force for Maryland lacrosse]

Since regular-season success has become standard at Maryland, Reese’s legacy will increasingly be defined by what happens each May. She already has four titles to her name, and this team, as usual, should be competing for No. 5.

So, while Reese noticed a different vibe among her players after beating the Cavaliers, nothing really changed. It was just win No. 261 as she continues to rewrite the record book.

“She is the ultimate G.O.A.T,” attacker Caroline Steele said. “I cannot imagine playing for a better coach.”