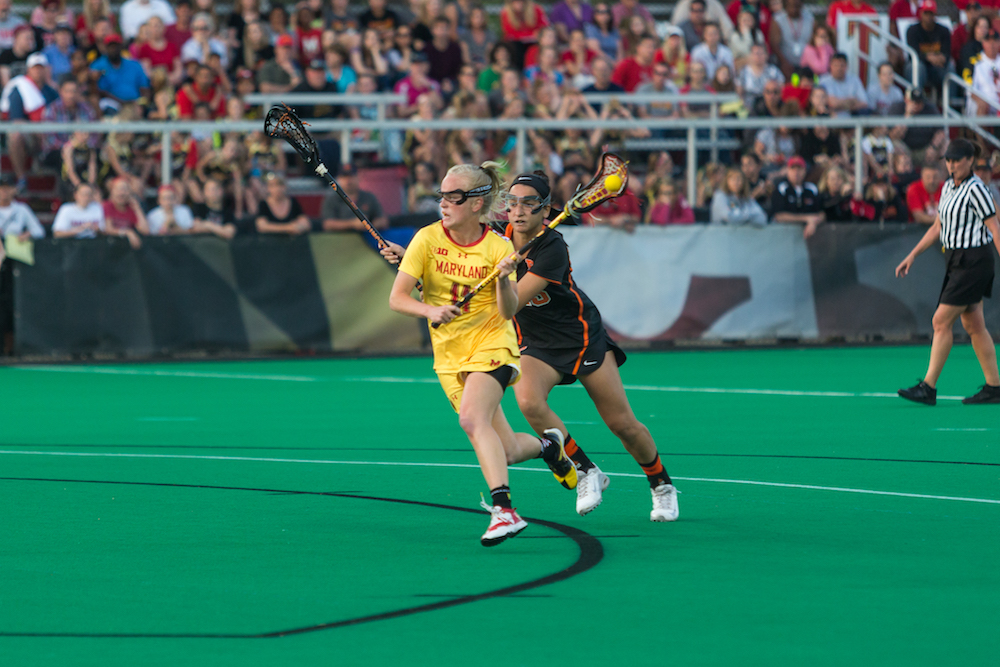 Attack Caroline Steele runs past a defender to move the ball during Maryland's 18-12 win over Princeton at the Field Hockey and Lacrosse Complex on Apr 11, 2017. (Marquise McKine/The Diamondback)

Of the many strong performances for Maryland women’s lacrosse against Virginia, attacker Caroline Steele’s was arguably the most encouraging. After seeing time on the sideline with a knee injury, she returned in a big way Wednesday.

With 14 minutes remaining in the first half, the senior scored her second of four goals. She tried to go right, but saw her lane blocked by defender Allison Shields. So instead, she spun to her left and sniped a shot near-post while falling to the ground.

Her goal snapped a five-minute dry spell and gave the Terps a 6-0 lead it wouldn’t come close to relinquishing. Maryland completed an offensive showcase at Virginia, with a massive first-half run complemented by a comfortable second period for an easy 16-6 win that made program history.

With coach Cathy Reese looking for victory 261 to make her the all-time Maryland wins leader, the Terps delivered. They shot 52 percent and were devastating in isolation offense en route to a commanding win.

“Having Cathy reach that milestone in her career is so amazing,” midfielder Meghan Siverson said. “She’s just such a great coach.”

The Terps established their offensive plan early — strand defenders and get inside. Attacker Brindi Griffin tried to continue her recent hot streak on the first possession, driving toward the cage off an isolation play to sneak a shot near post. However, goalkeeper Charlie Campbell was equal to her effort.

“Brindi and Steele were attacking hard early,” Reese said. “That was really nice.”

The Terps found shooting success just a minute later, though. Midfielder Jen Giles charged up field, dragging two defenders with her. Midfielder Erica Evans capitalized on the open space, received a feed from Giles, and comfortably finished into the bottom right corner to open Maryland’s scoring.

Steele added a second for the Terps two minutes later. The senior faked a pass, drove round the back of the cage and calmly slotted a goal between Campbell’s legs.

“I honestly felt great,” Steele said. “I’m happy to be out there again.”

Evans and Siverson both scored from free position opportunities 22 seconds apart to open a commanding edge. Giles and Steele added to it, making it 6-0 midway through the contest.

Meanwhile, Maryland’s defense locked in, blanking the Cavaliers for the first 20 minutes and forcing shots late in the shot clock. It took the home side 13 minutes to register a shot on goal.

“They’re a strong group,” Steele said. “They’re solid and they have each other’s back.”

Griffin, who entered Wednesday with 16 points in her last four games, scored two goals in quick succession after Virginia midfielder Lillie Kloak broke through with 10:33 before halftime.

On Griffin’s first, she scooped a ground ball and gained enough separation from her marker to bounce in an effort with the shot clock winding down. Her second was a powerful sidearm snipe for a 8-1 lead.

Steele added two more on either side of a third from Griffin to start a running clock. It was soon vanquished, as Virginia suddenly showed some signs of life.

The Terps conceded three goals in the last three minutes of the first half. Twice they fouled attacker Avery Shoemaker, and she converted both times. Midfielder Nora Bowen added a third with 25 seconds to go, but the Terps still held an 11-4 lead.

“Sometimes there are unlucky fouls,” Reese said. “We just put them on the eight-meter.”

Bowen carried her first half success into the second period. After Maryland went scoreless on its first two possessions, Bowen capitalized. She received a pass from Shoemaker inside, and comfortably finished past Megan Taylor for to pull the Cavaliers within six.

However, Griffin put an end to Virginia’s 4-0 run. She received a pass behind the net, shook her defender loose and finished from a tight angle. Then, Evans collected a pass from Steele, drove towards the cage, and easily finished for a 13-5 lead. Further goals from Giles and Siverson got the clock running again.

“We really got a lot different looks for a lot of different people,” Siverson said. “And really kept the defense on their toes.”

For the second straight game, the Terps were able to rotate some fresh faces into the game. Giles and Steele sat for the last 15 minutes of a contest out of the Cavaliers’ reach for some time, and Reese picked up win No. 261.

“Really proud of them and proud of their effort so far,” Reese said. “[I’m] excited for this group because there’s a lot of lacrosse left to be played.”