Mike Locksley is a frontrunner to coach Maryland football, but some boosters aren’t convinced 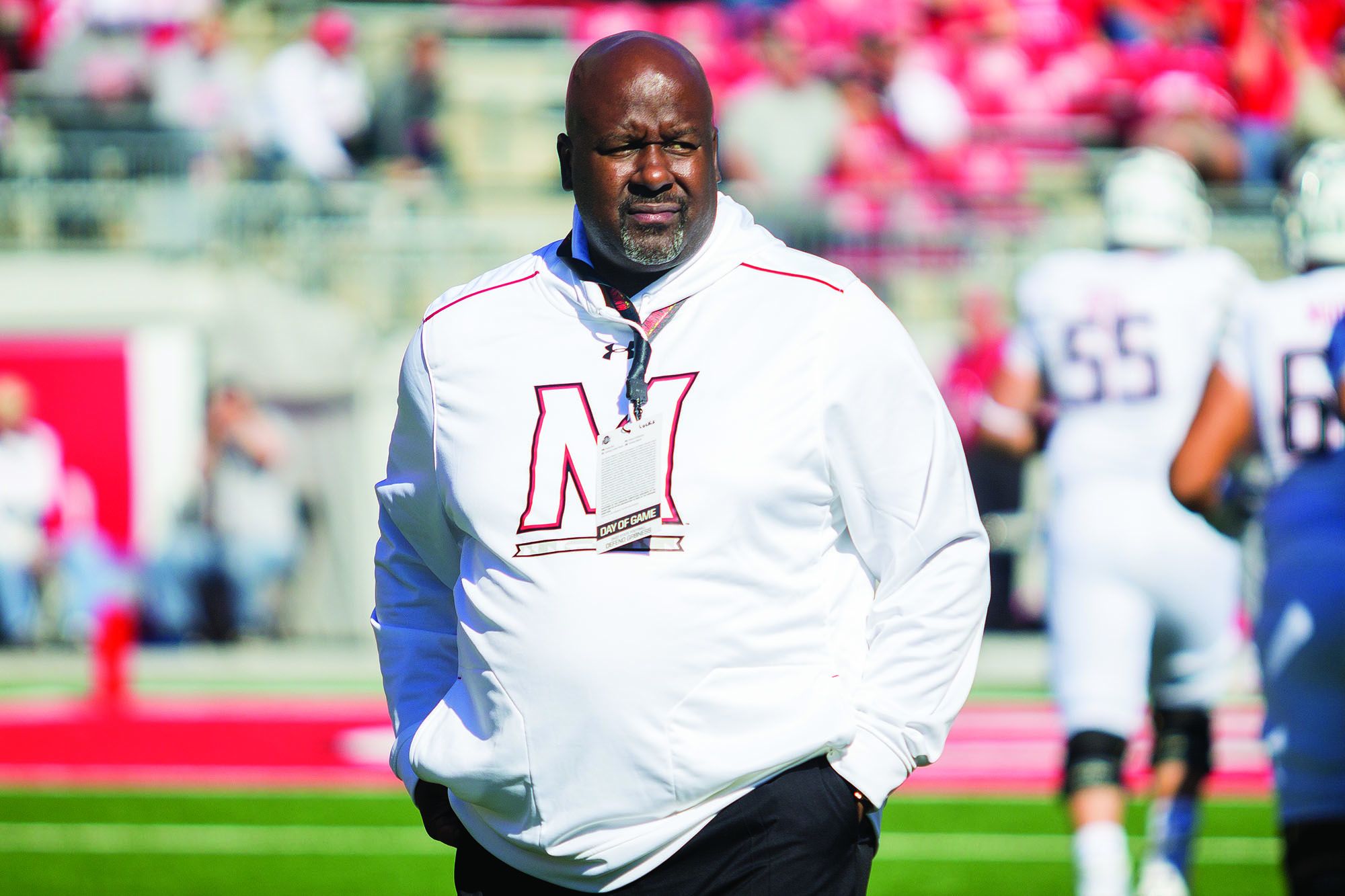 Offensive coordinator Mike Locksley observes players on the field during warmups prior to Maryland’s 49-28 loss to No. 1 Ohio State at Ohio Stadium on Oct. 10, 2015. (Marquise McKine/The Diamondback)

It took until the final game of the 2015 season — a Nov. 28 matchup against Rutgers — for Mike Locksley to eke out his first win as Maryland football’s interim head coach.

After Randy Edsall was fired early in the Terps’ second year as a member of the Big Ten, Locksley, the team’s offensive coordinator at the time, was put in charge. The ensuing 1-5 finish — which featured three losses to teams ranked in the final AP poll — brought his career head coaching record to 3-31.

Following the 2015 season, Maryland’s athletic department opted to bring in Michigan’s fiery defensive coordinator, DJ Durkin, in hopes of bringing success to a team struggling to stay afloat in a blue-blood conference.

Durkin was fired in October of this year, following offensive lineman Jordan McNair’s death and revelations of abuse in the program. Locksley is once again a frontrunner for the job, after helping No. 1 Alabama have one of the best offenses in the nation this season.

But for some high-level athletics boosters, Locksley’s head coaching resume is a worrying sign as the program attempts to stanch the bleeding from a tumultuous year.

“There are a few of us that agree that Locksley knows the DMV and the kids love him — but sucks as a coach,” one booster told The Diamondback. “As a head coach, his record is deplorable.”

[Read more: Matt Canada believes Maryland football is on the rise. Will he be a part of it?]

The sentiment is not universal, though. Harry Geller, a Champions Club member, welcomes Locksley’s potential return to College Park.

“I’m in full support of Mike. He learned a lot as a failed head coach — he admittedly took a bad job too early in his career,” Geller said. “He’s had three years at the greatest college program of all as the No. 2. He can mitigate damage from transfers, quickly beef up our recruiting classes and rally the community around the team.”

According to sources with knowledge of the situation, Maryland’s interim head coach Matt Canada and Michigan’s Pep Hamilton are also finalists for the head coaching position. But one source said “Canada does not think he is going to get it,” and Hamilton’s lack of head coaching experience could work against him.

Hired as the offensive coordinator in January, Canada steered the Terps through the 2018 campaign. He was put in charge following Durkin’s placement on administrative leave in August, briefly relegated to offensive coordinator after Durkin’s short-lived reinstatement in October, then returned to the helm until Maryland’s season-ending 38-3 defeat against Penn State on Nov. 24.

At multiple points this season, players have expressed support for Canada.

“Just staying together as a team — I feel like we wouldn’t have been able to do that without coach Canada being here all season,” running back Anthony McFarland said Nov. 20. “He makes it about the team, providing us with everything so we can go out and play hard every game.”

[Read more: At the end of a year marred by tragedy, Matt Canada again applauded his team’s perseverance]

Still, sources say Hamilton — an assistant head coach, passing game coordinator and quarterbacks coach at Michigan — and Locksley are the frontrunners for the position. Interviews for the job will take place Sunday and Monday, following Alabama’s 35-28 victory over No. 4 Georgia in the SEC championship game Saturday, according to The Washington Post.

Hamilton has worked for five NFL teams, and as a Howard University graduate, he’s connected to the Washington, D.C., area. That’s a characteristic that athletic director Damon Evans has said he values.

But Hamilton has never been a head coach. And after Durkin said a lack of guidance during his first head coaching stint leading to some of the problems within the football program, it’s unclear if Maryland would be comfortable opting for a similarly inexperienced candidate again.

A D.C. native, Locksley served as the Terps’ running backs coach for six years under Ron Vanderlinden and Ralph Friedgen before leaving for Florida in 2003. He became head coach at New Mexico in 2009, but was shown the door midway through the 2011 campaign after compiling a 2-26 record.

After returning to College Park as offensive coordinator between 2012 and 2015, he joined Nick Saban in Tuscaloosa. In the 2018 regular season, he led the Crimson Tide to the fourth-most yards per game in the nation.

Despite his offensive success, Locksley’s coaching record from two-plus seasons with the Lobos and half a season with the Terps is hard to overlook.

“If I hired a new trial lawyer and … you asked me his trial record,” another booster said, “if I told you he was 3-31, what would you think?”

In 2009, an administrative assistant filed a sexual harassment and age discrimination claim to the Equal Employment Opportunity Commission. An attorney said Locksley told Sylvia Lopez, who had worked for the university for 25 years, that she was too old for football recruits to find her attractive. The claim — along with Locksley’s countersuit alleging defamation — was eventually resolved, and Lopez later characterized the matter as a misunderstanding.

While Locksley was Maryland’s recruiting coordinator between 1998 and 2002, he worked with the Black-Eyed Susan Team, a group of students who gave tours and promoted the campus to recruits.

In a 2001 Diamondback article, Locksley said male students involved with BEST generally assisted with office duties and female students were more focused on tours. Friedgen said the program helped promote the university’s supply of “personable and pretty girls,” whom he deemed a “valuable asset”; he later apologized for his comments.

Also in 2009, New Mexico suspended Locksley for 10 days without pay after an altercation with an assistant coach. J.B. Gerald, the team’s wide receivers coach and recruiting coordinator, said Locksley had tried to choke him and punched him in the mouth, splitting his lip. Locksley and the school disputed parts of Gerald’s account.

Similar allegations rocked this university’s football program earlier this year. An external review found that strength and conditioning coach Rick Court — one of Durkin’s most trusted underlings — choked a player with a lat bar and regularly threw weights and food at them. The review also found that Durkin and athletic deartment officials failed to hold Court accountable before his resignation in August.

Many high-level boosters were apoplectic after Durkin’s firing Oct. 31, one day after the Board of Regents recommended university President Wallace Loh reinstate the embattled coach. The fallout — which included Regents chair James Brady’s resignation — prompted many influential boosters to call for a clean sweep of the athletic department and university leadership.

“The program is in a complete tailspin,” one booster told The Diamondback. “I’m disappointed that they got rid of [Durkin]. But I think if he goes, everybody should go.”

Loh is expected to retire in June, leaving Evans’ future beyond this year uncertain.

Wade’s resignation in 1989 paved the way for the hiring of a former Terps point guard from the 1960s, Gary Williams. And forward Walt Williams’ decision to stay in College Park after one year under Wade helped steer the program out of uncertainty and toward national relevance.

“Those two things don’t happen, who knows how long it would’ve been for us to have been good,” the booster said. “We most likely would not have a national championship banner.”

While Locksley’s recruiting success in the area and connection to players are positive signs for rebuilding a program mired in controversy, misgivings remain regarding his game management.

Still, many believe the 48-year-old offensive mind will be taking the reins again in College Park.

“You should probably bet on Mike Locksley,” a booster said.