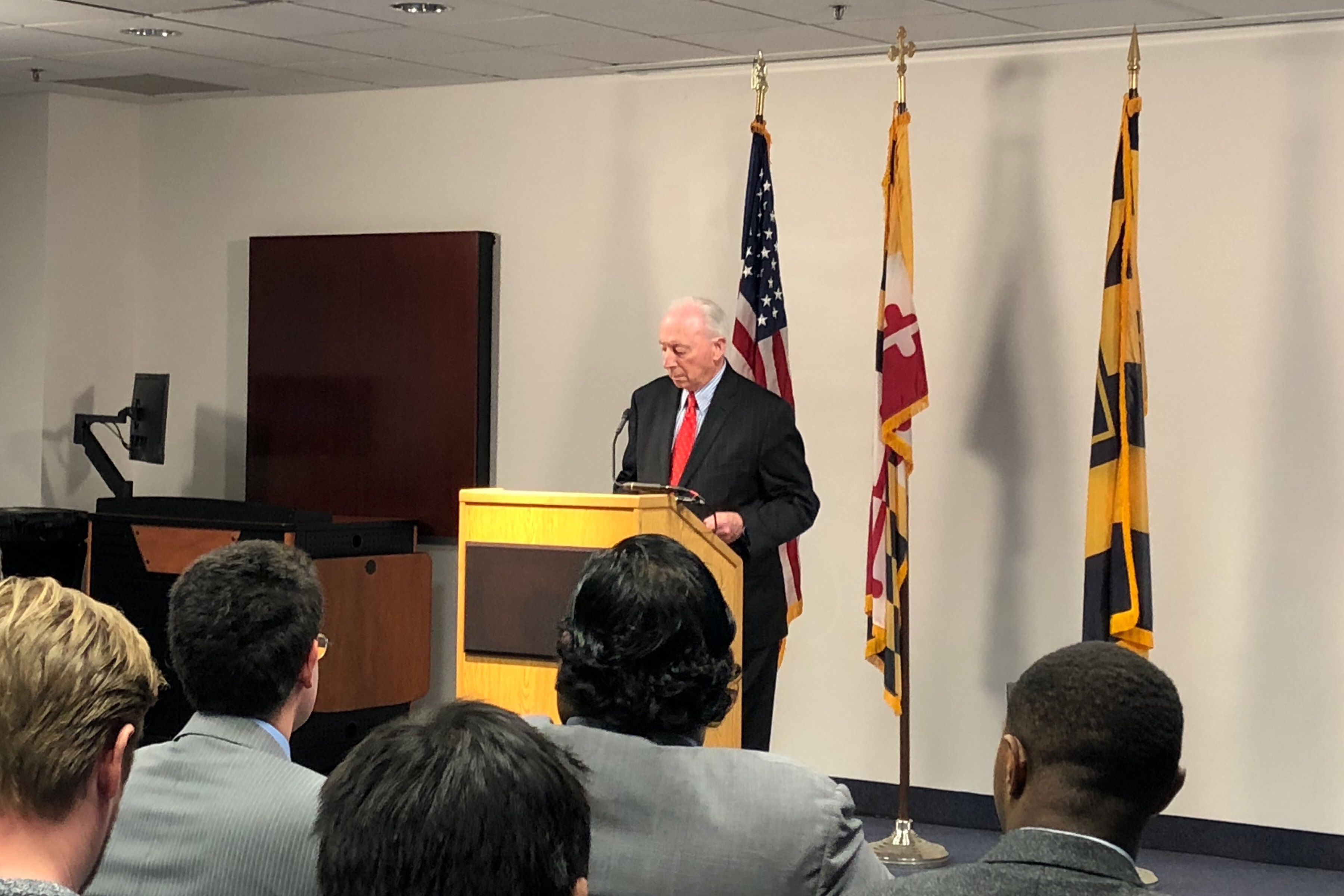 University System of Maryland Board of Regents Chair James Brady speaks at a press conference in Baltimore on Oct. 30, 2018. (Andy Kostka/For The Diamondback)

In a statement, Brady said he was “proud of [the] process” his board undertook in investigating the culture of the Maryland football program under Durkin, but acknowledged “reasonable people could come to other conclusions.”

The decision to bring Durkin back Tuesday was met with fierce disapproval from media and university constituents. That led university President Wallace Loh — whom the board reportedly pressured into committing to retire in June — to fire Durkin Wednesday, spurning the regents’ recommendation.

“In recent days, I have become the public face of both the board and its decisions related to these matters,” Brady wrote. “In my estimation, my continued presence on the board will inhibit its ability to move Maryland’s higher education agenda forward.”

Brady’s resignation is effective immediately. Barry Gossett, a prominent donor to this university’s athletic department, was serving as vice-chair, but Brady’s replacement is yet to be determined, according to a university system spokesperson. The Board is scheduling a meeting next week “at which it will select a new chair,” according to a statement.

Backlash from politicians, students and the McNair family prodded Loh to fire Durkin and was acknowledged by Brady in his resignation.

“I respect the many people – including elected leaders, members of the public and members of the board – who disagreed with the recommendations a majority of this board ultimately made,” Brady said. “These were difficult decisions.”

Gov. Larry Hogan appointed Brady, who served as his campaign chairman in 2014, to the board in 2015. Brady served as the secretary of Maryland’s Department of Business and Economic Development in the late 1990s.

Earlier Thursday, the Post reported Brady and the board had also recommended the university keep trainers Steve Nordwall and Wes Robinson, who failed to properly treat offensive lineman Jordan McNair when he suffered heatstroke at a team workout May 29.

“[Brady] was the architect for the absolutely outrageous decision that the board made,” Murphy said. “We can no longer have any confidence that he will operate out of pure motives instead of operating out of the numerous agendas to satisfy, including his own, in this case. And so we’re urging the governor to dismiss him.”

Prior to Durkin’s reinstatement, Murphy had accused Brady and the board — which has hiring and firing power over the presidents of institutions in the system — of harboring ulterior motives for Loh’s ouster apart from the circumstances surrounding McNair’s death.

Murphy mentioned Loh’s 2015 decision to change the name of the football stadium from Byrd Stadium — referencing long-time segregationist football coach and university president Curley Byrd — to Maryland Stadium. The board approved the name change, but Brady was one of the dissenting votes.

“[Brady] is a remaining impediment for justice,” Murphy said Wednesday.