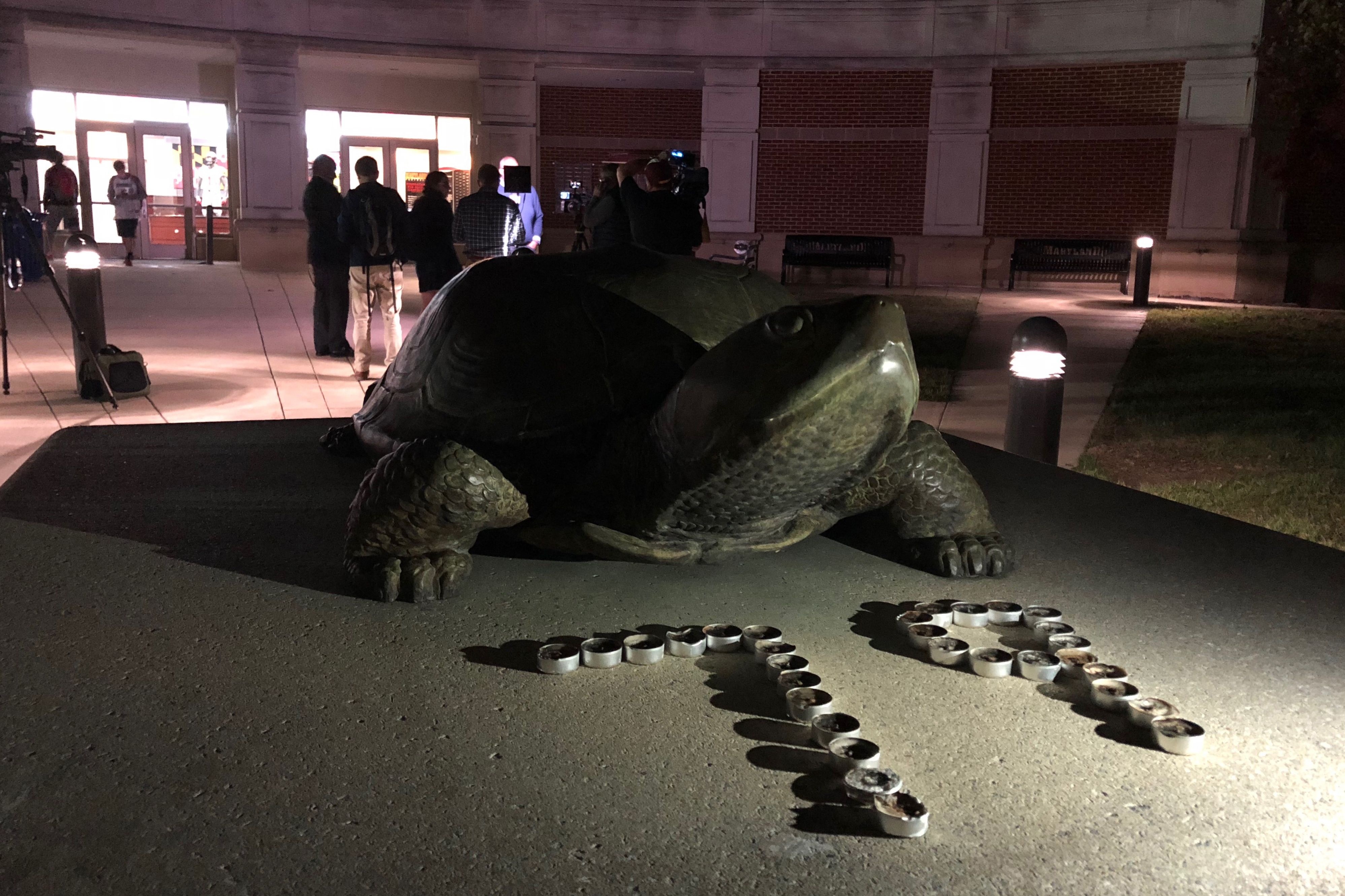 Candles forming Jordan McNair’s No. 79 in front of the Testudo statue at the Gossett Football Team House on Oct. 31, 2018. (Andy Kostka/For The Diamondback)

For most of practice Wednesday, DJ Durkin stood behind offensive coordinator Matt Canada, the latter of whom knew Durkin’s team a whole lot better than Durkin did. After 81 days on administrative leave, Maryland’s head coach had been reinstated the prior afternoon.

But by the end of Wednesday’s practice, the university had reversed course, firing Durkin less than 24 hours after his return was announced.

As players trickled out of Gossett Football Team House, they spoke more candidly than they had in the previous four months about the ‘roller-coaster of emotions’ they’ve been on, while Marty McNair, the father of the late offensive lineman Jordan McNair, and lawyer Billy Murphy also talked to media.

“The right decision was made for justice for Jordan and for everything to be easier for us as players,” offensive lineman Johnny Jordan said. “I don’t think it’s done by any stretch, but it’s definitely nice to just be able to breathe for a little bit.”

Shortly after Wednesday’s practice, players met for a team meeting — which, as Jordan said, has been a frequent occurrence since McNair suffered heatstroke May 29.

At the meeting, athletic director Damon Evans informed the team that Durkin was no longer their head coach.

“A lot of people really just confused. You bring him back, it brings a lot of mixed emotions. Then you fire him,” one player said. “Like, what was the point of bringing him back just to terminate him the next day?”

Tight end Michael Cornwell, who attended McDonogh School along with McNair, stood smiling next to Marty McNair, waiting for a chance to greet him. Then, the senior embraced his fallen teammate’s father before returning to his car.

Jordan, who was roommates with McNair, later exited and also embraced Marty McNair before meeting with the media.

Each morning, he said, he sees McNair’s room in his apartment and is reminded of the loss of his friend. He said Durkin’s removal “definitely helps a little bit,” and that he feels comfortable with Canada — whom wide receivers coach Chris Beatty credited with helping right the ship over the past few months — continuing as interim head coach.

“The last couple of months have been pretty normal, just because we had a new norm with the change,” Beatty said. “But it’s become — obviously, the last 24 hours were different. I guess it kind of is what it is. We’ll see what tomorrow brings; things seem like it’s changing all the time.”

Marty McNair was already in College Park with Murphy for an interview when he got a phone call informing him Durkin had been fired. He rushed over to the field house shortly after.

“Now, we’re on the road to justice for Jordan,” Murphy said.

Following Tuesday’s Board of Regents press conference in Baltimore, where regents chair James Brady recommended the university retain Durkin and Evans, the McNair family attorneys reiterated their support for Loh, who had accepted “legal and moral responsibility” for Jordan McNair’s death.

Loh had reservations about Durkin’s return but initially went along with the Board’s recommendations. On Wednesday, however, as the media pummeled the decision, Loh met with university constituents who helped sway him to do right by the McNair family again.

“Everybody felt this injustice, all the way across the board,” Marty McNair said. “The student body, his teammates, parents, public officials.”

Loh’s change of heart brought a flock of media to the front of Gossett Team House, four months after a 911 call (which downplayed McNair’s symptoms and came 67 minutes after their onset) brought ambulances (which had to drive around the building because nobody went to direct them) to the same place.

Loh decided he would disobey the Board’s recommendation not to hold Durkin responsible for McNair’s ensuing death, despite the group’s warning that he would be fired for doing so.

And as McNair’s former roommate stood just steps away from a Testudo statue adorned with candles in the shape of McNair’s No. 79, he voiced support for a decision that finally brought some resolution to him and his beleaguered teammates.

“Every day, I live that two-week period. From the end of May to June 20, the day of his funeral, I relive every day,” Johnny Jordan said. “This has all just kind of brought that back in the limelight as we were beginning — not to forget — but began to really lock into the home stretch of the season.

“It was the right decision for the university and for the football program moving forward.”