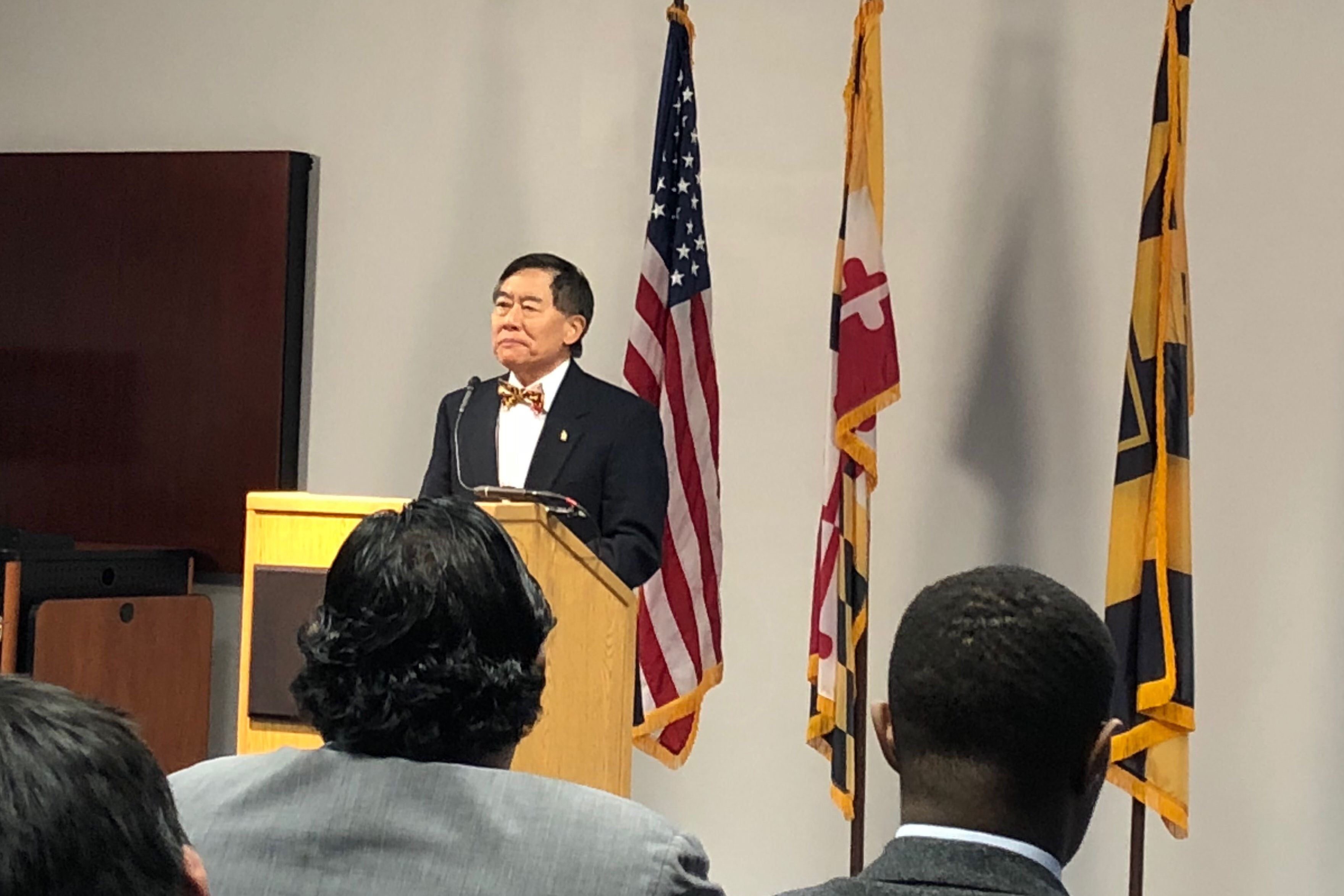 University of Maryland President Wallace Loh announces he will retire in June 2019 at a press conference in Baltimore on Oct. 30, 2018. (Andy Kostka/For The Diamondback)

BALTIMORE — The University System of Maryland Board of Regents recommended on Tuesday that football coach DJ Durkin and athletic director Damon Evans keep their jobs, while university President Wallace Loh will retire in June, in the wake of the investigation into Maryland’s football culture.

After meeting five times to discuss the investigation results, the board recommended no personnel changes at a press conference in Baltimore on Tuesday. This was despite the investigation concluding that Evans and Loh bear responsibility for the abuse that permeated the football team under Durkin, who has been on administrative leave since August.

The findings, which leaked Thursday and was officially released by the board Monday, concluded that Maryland’s athletic department fell into disarray under former athletic director Kevin Anderson and wasn’t repaired by Loh or Evans, meaning Durkin and strength and conditioning coach Rick Court operated essentially unsupervised.

The report found Court was abusive to players and said Durkin had the responsibility to supervise him, but Durkin — who is listed as Court’s direct superior in contracts and on the team’s organizational chart — denied that was his job or that Court had crossed a line. Multiple coaches and players said in the report that Court and Durkin were “the same person.”

The investigation stemmed from allegations of abuse that arose after the death of offensive lineman Jordan McNair. McNair suffered heatstroke at a team workout May 29, didn’t receive proper treatment from trainers and died June 13, bringing the program under scrutiny.

On Aug. 10, an ESPN report alleged that a “toxic culture” in the program may have played a role in McNair’s death. Days later, the university placed Durkin, Court and athletic trainers Steve Nordwall and Wes Robinson on administrative leave, and Court resigned soon after.

At a press conference Aug. 14, Loh announced the university accepted “legal and moral responsibility” for McNair’s death. Days later, board assumed control of two investigations — one into McNair’s death and one into the team’s culture — that had been launched by the university.

The Washington Post reported that Loh told the Board of Regents on Friday that he was in favor of letting Durkin go.

“It was made clear that if [Loh] wanted to remain in his position, he had no option,” an anonymous source told The Post. “The board has no authority to hire and fire a football coach, but they made clear that returning DJ to the field was their highest priority.”

At the press conference Tuesday, Loh said he was pleased to hear the board recommend that Evans stay. He did not say the same about Durkin.

When asked about his relationship with Durkin, Loh replied, “He has been a successful coach in terms of many aspects of football, he is coming back and … we are very supportive of the recommendations of the Board of Regents.”

The 17-person Board of Regents sets policy for the University System of Maryland’s member institutions. The board has hiring and firing power over university presidents, who have control over personnel at the campus level.

In the summer and early in the academic year, campus community members called for the president’s resignation. Loh said their calls came from concern for student athletes, and that “it’s not about me.” When asked if he had heard of any indication about a change in his position as university president before the results of the investigation into McNair’s death became public on Sept. 21, Loh iterated his experience.

“I have been here for eight years. And I accepted this job to serve this university. And, as I’ve said repeatedly, and it is a core part of who I am, is that the mission of a university — even a research university — the first mission is the success of the students,” he told The Diamondback.