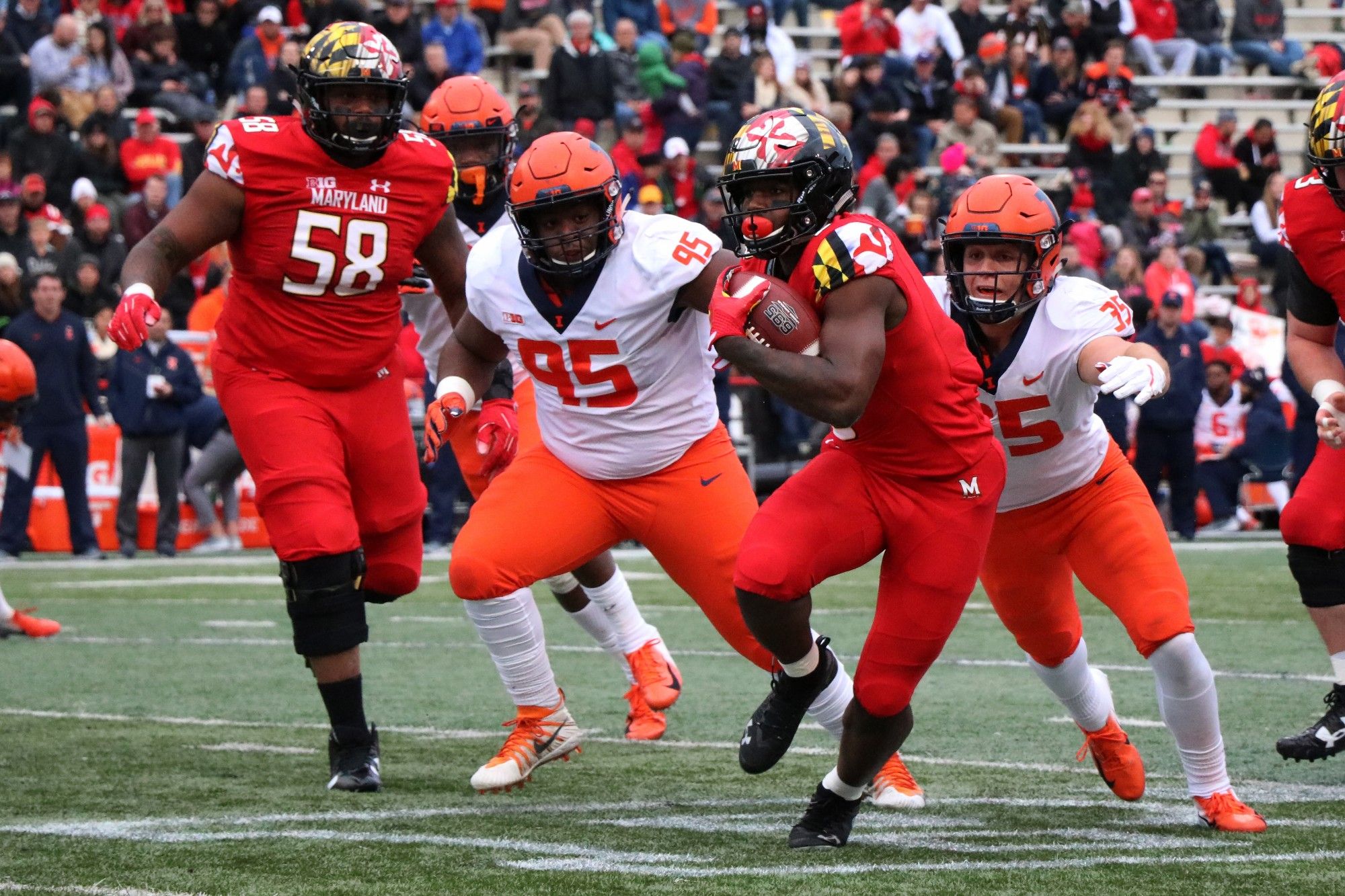 Running back Tayon Fleet-Davis carries the ball during Maryland football’s 63-33 win over Illinois at Capital One Stadium on Oct. 27, 2018. (Andi Wenck/The Diamondback)

The sophomore tailback, stuck behind older, more experienced runners, had practiced particularly hard the last three weeks but didn’t receive the carries to show for it. He managed 99 yards as a freshman and hadn’t handled more than three carries in a game this year.

So when Canada pointed out Leake’s work ethic Friday, the team broke out in applause. And when given a chance Saturday, Leake made the most of his opportunity.

Leake returned a first-quarter kickoff 97 yards for a touchdown and exploded for 140 rushing yards with three more touchdowns, helping lift the Terps over a hapless Illinois defense, 63-33. Leake led Maryland to its most points ever in a conference matchup as it posted 712 total yards and rebounded from last week’s shutout.

“That’s what a team guy does,” Canada said. “Leake is a great story and just continuing to keep pounding the rock and finding a way to get your shot, and he got it.”

Before Leake began leaving his mark on the game, the Terps’ ugly first drive gave Illinois a short field and was reminiscent of last week’s loss to Iowa, in which Canada’s offense managed just 115 yards. The Illini (3-5, 1-4 Big Ten) settled for a field goal, though, and Leake found a seam on the ensuing kickoff and returned it 97 yards for a touchdown, with a block from running back Ty Johnson in Illinois territory helping spring him free.

“I was just blessed with the opportunity to come out,” Leake said. “My O-line was doing a great job blocking, and I just did my job. I hit the hole.”

Midway through the third quarter, quarterback Kasim Hill wound back and heaved a ball deep downfield, connecting with wide receiver Dontay Demus for 54 yards. On the following play, Leake weaved his way through the Illinois defense for a 27-yard score.

The two-play, 79-yard drive lasted 39 seconds and displayed the Terps’ utter dominance. Maryland’s big-play ability loomed large and often took the form of Leake, who scored three of the team’s six touchdowns of at least 40 yards. Leake became the first Terp since 2010 to record four touchdowns in a single contest, his final score coming on a jet sweep handoff that he took for 43 yards to the house.

“The backs were hitting the hole, making big plays,” Hill said. “We all feed off each other.”

Hill also had the best game of his career, throwing for a career-high 265 yards and adding three touchdowns.

In windy conditions at Iowa last week, Hill completed six passes for a season-low 47 yards. But Saturday, Hill showed he can be dangerous through the air and offered Maryland another offensive threat, completing 11 of his 19 attempts. With the game well out of reach, Hill didn’t play a snap in the fourth quarter.

The redshirt freshman’s display — which came against an Illinois defense with the second-worst pass defense in the Big Ten — helped push the Terps to its most yards since at least 1982.

By the fourth quarter, third-string quarterback Tyler DeSue was under center for Maryland and its first-string defense was relaxing on the bench. So Illinois scored three touchdowns late in the game to narrow the scoreline slightly, but the Illini were never in the matchup.

And for good measure, with less than a minute in the contest, tight end Chigoziem Okonkwo took a handoff 54 yards down the sideline to ice Maryland’s most dominant win of the year.

One day after Maryland’s head coach, athletic director and university president each met with the Board of Regents with their jobs hanging in the balance, a team that dealt with tragedy and innumerable offseason distractions drew one step closer to bowl eligibility with a dominant victory in front of a Maryland Stadium student section that was nearly empty from the opening kickoff.

“We were going to find a way to be 5-3, and that was the only message we had, and I think our players did a great job,” Canada said. “They deserve tonight.”