Tre Watson left Illinois for Maryland as a “one-year fix.” He’s been so much more. 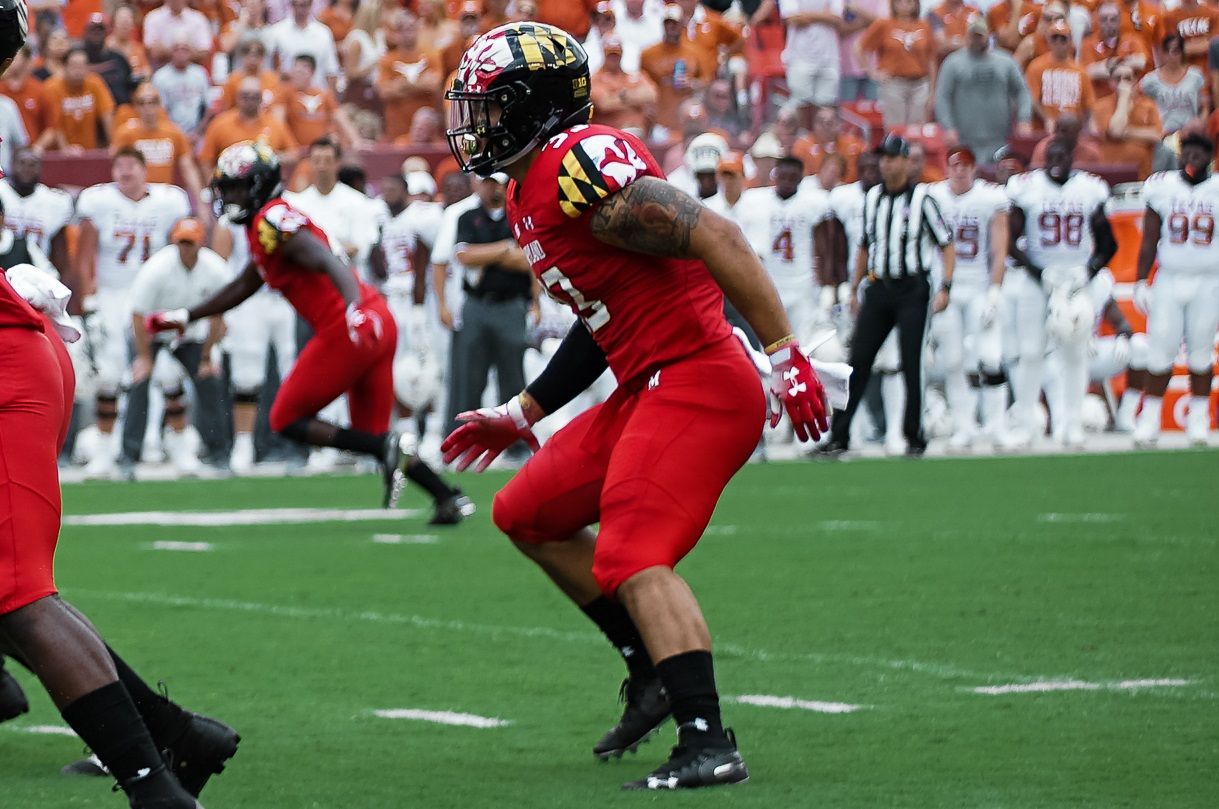 Linebacker Tre Watson prepares to rush the quarterback during Maryland’s 34-29 win over No. 23 Texas at FedEx Field on Sept. 1, 2018. (Corey Hart/The Diamondback)

Early in linebacker Tre Watson’s redshirt junior season at Illinois, his mother Christa noticed a change in her son over the phone.

The year before, Watson finished second on the Fighting Illini with 102 tackles, forcing three fumbles. He seemed primed for an increased role in 2017, building off his All-Big Ten honorable mention the year prior.

But his playing time didn’t materialize the way he’d envisioned, and his disappointment was evident in each conversation with his mother.

“He wasn’t calling me with the same positive attitude anymore,” Christa Watson said. “He’s frustrated. And he doesn’t feel like he can do anything right enough.”

Tre Watson tweaked his knee in the third game of the season, hampering him for the next few weeks before he underwent surgery. He missed three contests and dropped down the depth chart, but still finished with 65 tackles.

Watson’s teammates voted him as a captain in four games, but his mother said his leadership style didn’t seem to translate to what his head coach Lovie Smith was looking for. So, once Watson returned from surgery, he played the final three games knowing he would seek a change of scenery for his final year of eligibility.

When the season concluded, Watson met with Smith, and they agreed a transfer made sense for the linebacker. About a week later, Watson visited College Park. He committed to Maryland shortly after.

Now midway through what will be his lone campaign with the Terps, Watson has proven to be an irreplaceable presence on defense. He’s leading the Big Ten in tackles and is navigating his teammates through a tumultuous season that began with the death of offensive lineman Jordan McNair and remains uncertain with coach DJ Durkin on administrative leave.

“He wanted to have fun again,” Christa Watson said. “Last season took fun out of football for Tre.”

Barnes had compiled a full collection of Watson’s highlights at Illinois. Then, he pulled together a series of similar plays made by Maryland players. As Barnes went through, he pointed out specific moments when Watson would complete a tackle or defend a pass.

“If we have you doing that here,” Christa Watson recalled Barnes saying, “this is how you would fit in. This is where you would play.”

Presenting a clear role for Tre Watson early helped tip the scale in Maryland’s direction. Watson also visited North Dakota State — where his younger brother plays wide receiver — and Vanderbilt. Both schools were interested in adding the experienced linebacker. But Barnes’ influence swayed Watson to stay in the Big Ten.

Maryland was one of the first schools to call him after he received his release papers in December, and he could sense the coaching staff’s interest in him. Barnes followed through with that on the visit.

“That just proved that they needed me, they wanted me, at a position of need,” Watson said Sept. 25. “I felt comfortable coming here and making that decision.”

Barnes also showed Watson the Terps’ depth chart at linebacker. He was confident in the potential of the younger players for future seasons, but felt his team needed a veteran presence in the linebacker group to bridge that gap.

Jermaine Carter, who led Maryland in tackles in 2015 and 2017, was drafted by the Carolina Panthers. Shane Cockerille, who paced the Terps in tackles in 2016, also graduated, leaving a hole in Barnes’ unit. That’s where Watson came in.

“They needed a one-year fix,” his mother said. “He was just the total piece to fit that.”

‘Eye of the storm’

Watson called his mother on May 29, out of the blue. She could tell something was wrong.

“He was beside himself,” Christa Watson recalled.

Tre Watson and his teammates were on the practice field when offensive lineman Jordan McNair had to be helped through his 10 110-yard sprints. They saw him struggle and knew he was taken to the hospital with heatstroke.

“He struggled with that,” his mother said.

She sensed Watson needed some space. Knowing he shouldn’t be coerced into talking if he didn’t want to, Christa checked in on him every couple of days. McNair died June 13.

About two months later, coach DJ Durkin was placed on administrative leave along with three other team officials, sending the Terps into disarray shortly before their season opener against then-No. 23 Texas.

Watson had been through similar tumult in a football program before, though, which allowed him to help guide the rest of his teammates.

A week before his redshirt freshman season began at Illinois, coach Tim Beckman was fired amid allegations he pressured players to play through injuries and influenced medical decisions.

A change at athletic director led to Beckman’s replacement, Bill Cubit, being fired just after signing a two-year contract, setting the stage for Lovie Smith to lead the Illini during Watson’s final two years.

While that experience can’t lessen the pain caused by McNair’s death, it meant it wasn’t Watson’s first time playing under an unstable leadership structure.

“No one could have anticipated the things that happened this summer,” Watson said. “We knew that, no matter what happened, we were going to have 12 games coming up this season and no one was going to, you know, take it easy on us just because we had a rough go of things.”

So, Watson worked to build his teammates’ trust in him. He offered feedback and advice to the younger linebackers he was brought in to mentor. Watson proved in practices, and then in games, that he came to Maryland to work hard and contribute.

“Tre’s worked his way in and earned the respect of the defense,” Maryland football interim head coach Matt Canada said. “He just wants to win. I believe that.”

Watson’s efforts paid off immediately in Week 1, when he snagged an interception late in the contest to help the Terps upset the Longhorns. He recorded 15 tackles against Temple and Iowa this season, added a pick-6 in a win over Minnesota and snatched two more takeaways the past two games. Through it all, he’s helped add stability to an unsteady program.

“Tre’s one of those guys that’s like, ‘Look, we’re operating in the eye of the storm,’” his mother said. “Everything can go crashing and storming around us, but we’re going to operate right here.”

After Barnes went through film with Watson during his initial visit to Maryland — and after the linebacker coach outlined Watson’s clear role with the team — Barnes added one final incentive for the 6-foot-2 transfer.

Maryland would be playing Illinois, his former team, in October. Watson would have the chance to prove his ability against his former coach and teammates, adding another consideration to his decision and drawing him back to the Big Ten for a potential reunion.

“This game was part of the reason Tre chose Maryland,” his mother said. “If you know one thing about Tre, he’s a competitor.”

Lovie Smith knows Watson. He granted his release from the Illini just last year. But now healthy after a knee injury slightly hampered his redshirt junior campaign, Watson has returned to the heights he reached in 2016 at Illinois, when he eclipsed 100 tackles.

With the Terps, Watson leads the Big Ten with 75 tackles, is tied for a conference-best four interceptions and is the lifeblood of a unit that’s shown stark improvement over last year.

“I know Tre is one of the leaders there,” Smith said. “I think we know what we’re going to see from him, and that is good play.”

The Terps need two more wins to become bowl eligible this season. Watson missed out on playing in Illinois’ 2014 bowl game against Louisiana Tech as he redshirted. He’s eager to end his career “on a high note,” he said Sept. 25, and the clearest path to postseason play is through Illinois and Indiana.

And when Watson takes the field Saturday at Maryland Stadium, a slew of family and friends will be in the stands to watch him take on his former squad, adding to the potential emotions of the day.

They’ll be there to watch Watson lead the Terps on defense and guide his teammates through a turbulent season off the field, just like he did during his time as an Illini.

“For Tre, I’m sure it’s like poetic justice,” Christa Watson said. “I’m just glad to see him happy and having fun again.”