Despite Jake Funk’s broken hand, Maryland football still has options at running back 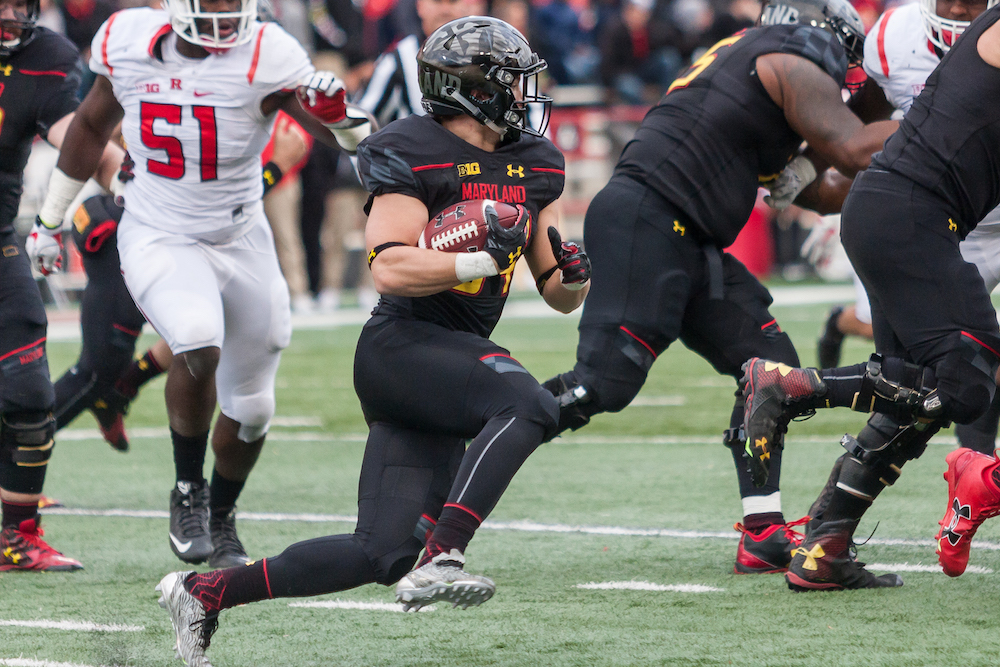 Running back Jake Funk carries the ball up the field during Maryland's 31-13 win against Rutgers on Nov. 26, 2016 at Maryland Stadium. (Marquise McKine/The Diamondback)

Funk missed the Terps’ win over Bowling Green on Saturday and has been ruled out for this weekend’s home opener against Temple. He’ll have to be reevaluated before an exact return date is announced.

Even without Funk, Maryland has a plethora of running back options. But the Terps will miss Funk’s special teams contributions as they prepare for their final nonconference matchup of the season.

“He’s a tremendous football player for us, not only on offense but in our special teams,” Canada said. “So it is a significant loss, for sure.”

In Funk’s lone contest of 2018, the junior had two carries for -2 yards and caught one pass for four yards as the Terps toppled then-No. 23 Texas for a second straight season. Last year, the Damascus product scored four touchdowns and averaged 5.4 yards per carry while recording nine tackles.

At open practice Tuesday, Funk watched with a soft cast on his left hand and forearm.

Canada’s offense revolves around rotating his playmakers and creating different looks for defenses.

Against Texas, 11 different players took a handoff, and 10 hauled in a reception. While Funk was sidelined against Bowling Green, Maryland still utilized seven different ball carriers, four of whom scored at least once.

In the fourth quarter on Saturday, sophomore running back Javon Leake scampered 36 yards to the end zone to ice the Terps’ win. The touchdown run, from a player who was unlisted on the team’s preseason depth chart, was evidence of the vast options at Canada’s disposal.

“We are blessed to have a lot of running backs in our room right now that can play,” Canada said. “[Leake] didn’t get a lot of reps in the first game. He got in and got a touchdown on Saturday.”

Running back Anthony McFarland also shined against Bowling Green, rushing for 69 yards and leading the team with 53 receiving yards, most of which came on a 46-yard throw from quarterback Kasim Hill in the fourth quarter.

Because of the NCAA’s new redshirt rule, which allows players to appear in four games without counting it as a full season of play, Canada isn’t pressed to immediately make redshirt decisions.

Funk hasn’t used a redshirt in his career, so if his hand injury sidelines him for longer, he could retain four years of eligibility. Likewise, Leake and other inexperienced backs could be held out later in the year.

“We’re certainly monitoring it with each player that has a redshirt year left, whether it’s a true freshman or anybody else,” Canada said. “That’s a rule that’s going to be something we all have to look at as coaches throughout the country.”