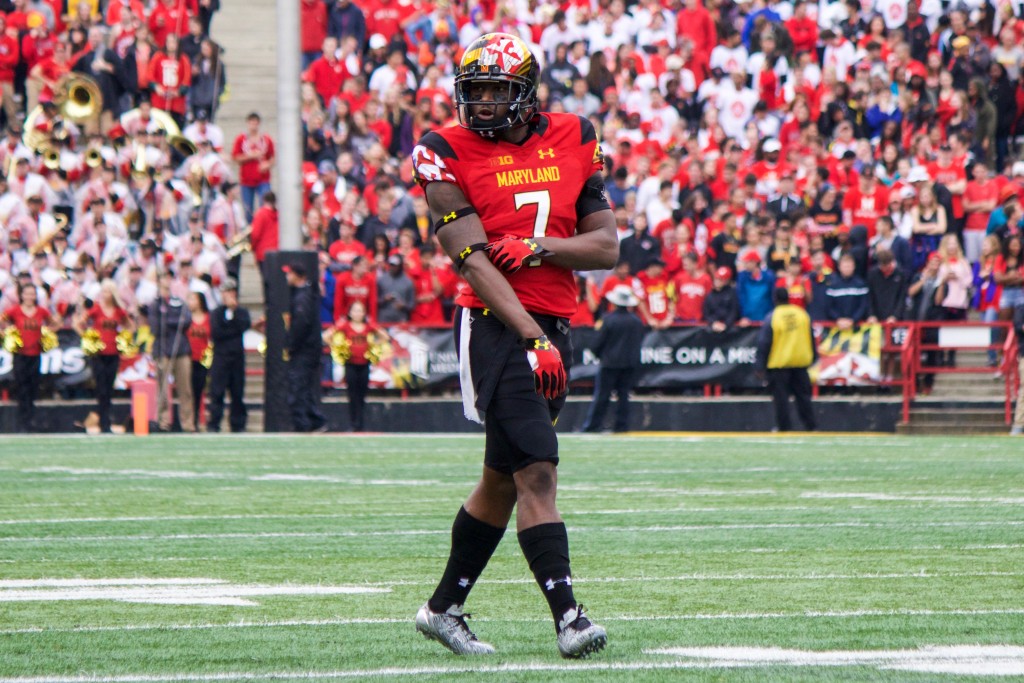 While driving around their hometown of Immokalee, Florida, on Christmas Eve 2014, J.C. Jackson and his longtime friends, Jacky and Jackinson Marcellus, had a bad feeling about the red car that was following them.

What happened next was one of several incidents that put Jackson’s football career — and his life — in jeopardy, sending the promising prospect on a rocky path between Florida, Riverside City College and Maryland.

When Jacky Marcellus pulled over to let the suspicious car pass, someone opened fire into their vehicle, nicking his back, hitting his brother’s face and grazing Jackson’s eyelid. They crashed into a fire hydrant as the assailants sped away.

Though all three recovered fully from their injuries, they acknowledge it could have been deadly.

“It scared all of us,” Marcellus said. “But it taught us that we can’t just move along like we’re invincible.”

At the time, Jackson was a well-regarded freshman cornerback for the Gators. He dreamed of making it to the NFL. But his first year in Gainesville postponed that ambition.

In April 2015, Jackson was arrested and later charged with four felony counts related to an armed robbery, carrying a potential life sentence. A jury acquitted him of each of those counts, but Florida didn’t let him remain with the program.

After landing at Riverside City College in California, he battled recurrent shoulder issues and dwindling self-confidence.

But at Maryland, Jackson resurrected his career as a lockdown corner. He absorbed guidance from coaches and veteran players, gaining the maturity necessary to make it to the next level.

While Jackson wasn’t selected in the 2018 NFL Draft, he signed as a free agent with the New England Patriots and has a solid chance of an NFL career — something that seemed unlikely until recently. That’s cause for celebration among those who have been around since his days in Immokalee.

Former Indianapolis Colts running back Edgerrin James — Immokalee’s most notable football product — spoke openly during his career about the difficulties of growing up in the agricultural South Florida town.

In 2000, James told ESPN one of his sources of entertainment as a kid was watching people smoke crack. One uncle went to jail, and James came home one day to discover the body of another who had committed suicide in his backyard.

Immokalee has a reputation for preventing even its most talented residents — often black athletes — from escaping its grasp.

“A very rough town,” Marcellus said. “The biggest problem is that there’s nothing to do. It’s so easy to get in trouble and there’s … so much stuff trying to pull you in to do stuff bad.”

According to U.S. Census data, about 45 percent of Immokalee residents live in poverty. The annual per capita income between 2012 and 2016 was $9,966, one of the lowest figures in the nation.

On Friday nights, Immokalee High School football is a beacon. Floodlights illuminate the field bright green but leave the barren surroundings in the dark. After games, town members congregate at the nearby McDonald’s or convenience stores to discuss the action.

“These kids know this is an opportunity to get out with a possibility of maybe one day taking care of their family, and I’ll tell you what, that’s a ton of pressure for a 15-, 16-, 17-year-old kid,” said Rich Dombroski, who began coaching Immokalee when Jackson was a senior. “Some kids can get out of it, some kids can’t. But it’s the heartbeat of the town.”

Hoards of college scouts visited Jackson in high school. While racking up highlight plays as both a wide receiver and cornerback, he became a four-star recruit and 247Sports’ No. 136 overall prospect in the class of 2014.

After being fooled by a running back pass play that sent a receiver 10 to 15 yards behind him, Jackson tracked back to knock the ball away with speed that astounded teammates and coaches.

“I looked at my offensive coordinator and I was like, ‘Oh my god, I have never seen that before in my life,'” Dombroski said. “It was one of those things like, ‘That kid’s special.’ … He just looked like an NFL player.”

Florida, Miami and Florida State offered scholarships, giving him his pick of powerhouse in-state schools. Under the guidance of his mother, Lisa Dasher, he chose the Gators.

Area residents were excited for Jackson to represent Immokalee in the SEC.

He never got that opportunity.

Dasher believed Jackson’s on-field success would attract people with bad intentions, and she worried his trusting nature made him vulnerable. So she urged him to be selective with whom he let into his inner circle.

But Jackson struggled to follow his mother’s advice. A season-ending shoulder injury during his first game at Florida prevented him from making an impact as a rookie — and left him with significant downtime.

On Dec. 13, 2014, police found two small bags of marijuana in a car with Jackson and several Florida teammates, though no charges were filed.

In April 2015, police arrested Jackson in connection with an armed robbery, charging him with three counts of home invasion robbery and one count of burglary.

According to the police report, Jackson brought two people into an acquaintance’s apartment before exiting to take a phone call. Soon after, the report read, one of the two men Jackson arrived with pulled out a handgun, pointed it at the resident and stole marijuana, an Xbox and $382 in cash.

Though Jackson was ultimately cleared of all charges, the incident took a toll.

“He had to learn the hard way,” Dasher said. “It all felt absolutely scary.”

Many saw the marijuana incident, Christmas Eve shooting and felony arrest and concluded Jackson was a lost cause. In the wake of the robbery case, Florida didn’t allow him back, which irked his parents, as did the university’s treatment of him after the fact.

Jackson said Florida locked him out of his room so he couldn’t collect his belongings and made his family pay exorbitant fees to receive copies of his transcript and a laptop he had used while with the team. The university didn’t respond to multiple requests for comment.

“I felt bad about how they did him because they didn’t trust the process,” said his father, Chris Jackson. “They just got rid of him.”

Back in Immokalee, J.C. Jackson’s downfall felt like déjá vu.

“I remember the eerie feeling when the news broke,” said Immokalee High School graduate and filmmaker Carlos Cornelio. “What people don’t know, unless they grew up in Immokalee … is that before J.C., there were many just like him that for whatever reason didn’t make it out. You could walk into any local gas station and are liable to bump into someone who was supposed to be great.”

Jackson admits he wasn’t a model citizen at Florida. He hung out with the wrong groups and sometimes made poor decisions.

His tumultuous year with the Gators could have swallowed him whole. But Jackson, who had always viewed the NFL as one of few paths to a better life, didn’t let that happen.

“The tenacity to go, ‘OK, Florida wasn’t meant to be, it wasn’t in my cards, I still have an opportunity, let me make the most of it,'” Dombroski said. “I’m most proud of him for that.”

When newly hired Maryland coach DJ Durkin called Jackson in 2016, the one-time star was ready to give up football.

He found it difficult to remain positive while at Riverside City College, trying to begin his journey back to Division I football.

The call from Durkin, who had recruited and coached Jackson as Florida’s defensive coordinator, convinced Jackson to transfer to the Terps ahead of the 2016 season.

Coming to College Park put Jackson back on the map for NFL scouts. It also helped him mature.

“Coach Durkin just changed my whole mindset,” Jackson said. “Just being in that environment, not being in Florida, being away from home, I was just focused.”

Across two seasons at Maryland, Jackson’s coverage skills led to 13 pass deflections and four interceptions. In 2017, his first-quarter interception against then-No. 23 Texas set the tone in a 51-41 upset win, and his fourth-quarter pick at Minnesota sealed a tight conference victory.

He grew particularly close with defensive backs coach Aazaar Abdul-Rahim, who learned quickly that Jackson didn’t match the negative reports that followed him from Florida.

“It’s a crazy world,” Abdul-Rahim said. “People can think whatever, they can read literally one article and make an assumption about a human being based on an article they read on the internet.”

In December, following a 4-8 season from the Terps, Jackson declared for the 2018 NFL Draft as a redshirt junior. He made the decision in part because he knew he would become a father in February and wanted to be able to support his family.

Jackson didn’t hear his name called in the draft last week, but teams have complimented his mix of strength and speed, and some view him as a high-ceiling prospect.

“He’s a press corner with a lot of athletic ability,” Abdul-Rahim said. “He’s going to be a dynamic player in the NFL. I think he’s underrated.”

Jackson says his shoulder, which bothered him for years, is fully healthy. And despite going undrafted in a class loaded with talented cornerbacks and safeties, Jackson believes he is the most valuable of the group.

“I’m just a different breed,” Jackson said. “I feel like I’m the best. It’s all about that mentality, no matter how big or fast you are.”

In recent months, Jackson has opened up to those close to him, sharing how he felt during the most difficult moments of his career.

Jackson’s mother cried when she learned of his struggles shortly before the NFL Combine. She and other family members hadn’t realized the inner turmoil Jackson experienced in California, or that he considered quitting football altogether. She blamed herself for convincing Jackson to play in Gainesville, where his life unraveled.

But it didn’t take long for Dasher to feel better. Only a couple of years ago, she worried Jackson might end up dead or in jail. Now, he’s a proud father likely heading to training camp with the Patriots, having succeeded where so many other Immokalee natives fell short.

“It’s just a breath of fresh air,” Dasher said. “That’s all behind us. That part of our life is gone now.”