UMD sparked Torrey Smith’s activism and NFL career. On Saturday, he came back. 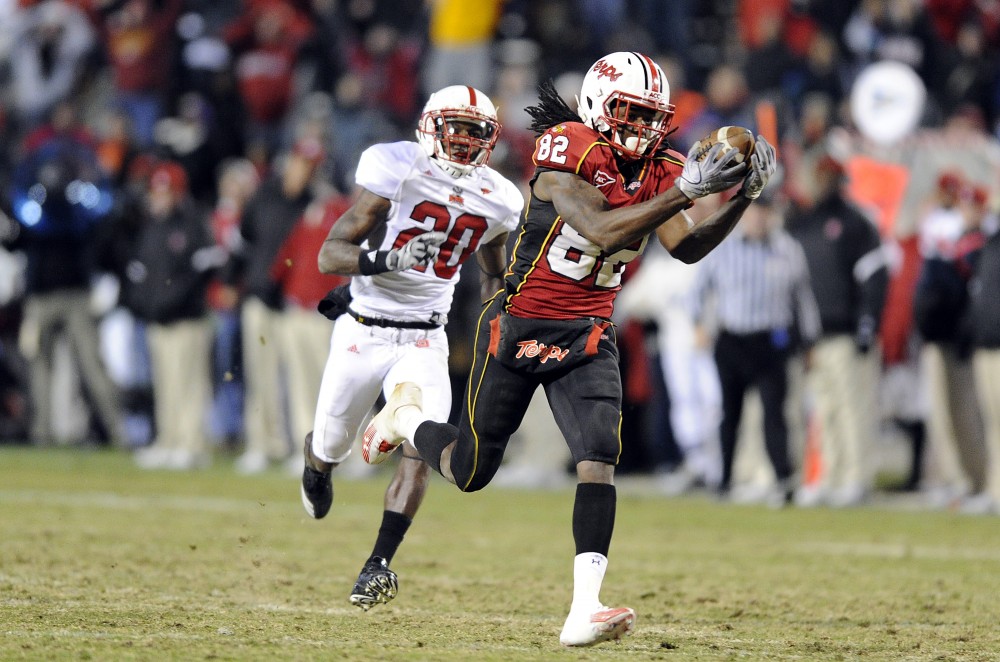 Philadelphia Eagles wide receiver Torrey Smith has won two Super Bowl rings in his seven-year NFL career, but Smith still values his trips to College Park and the relationships he built while playing football for Maryland between 2007 and 2010.

Smith grew up in Virginia, but says he developed into a man at Maryland, where he became one of the football program’s most accomplished players and met his wife, Chanel Williams, who ran for the track and field team.

Smith said he enjoys returning to College Park whenever he has time, and he attended Maryland men’s basketball’s 85-61 loss to No. 17 Michigan at Xfinity Center on Saturday afternoon. At a press conference before tipoff, Smith reminisced on his experiences as a student athlete and discussed his upcoming charity basketball game in Baltimore.

“College Park will always have a special place in my heart,” Smith said. “This is home. My two [kids], all they’re gonna know is Maryland.”

After playing quarterback at Stafford Senior High School in Falmouth, Virginia, Smith was an All-ACC selection as a wide receiver and kick returner his sophomore and junior seasons at Maryland.

In 2010, Smith recorded 1,055 receiving yards and 12 receiving touchdowns before leaving for the NFL Draft. He holds the program’s career all-purpose yards record (5,264).

The Baltimore Ravens drafted Smith with the 58th-overall pick in the 2011 NFL Draft, but Smith said learning about social issues was also one of his most memorable experiences at Maryland, as he’s now vocal about those topics.

Smith was one of four players who wrote a memo to NFL commissioner Roger Goodell to ask for league support on social activism in September. He also founded the Torrey Smith Family Fund, which provides resources to children in low-income areas.

The 29-year-old also won’t attend the Philadelphia Eagles’ White House visit after their recent Super Bowl win because of his disagreement with President Trump’s controversial comments.

Smith is outspoken on Twitter and said attending this university sparked his interest in social issues, engaging in debates on those topics in his African-American Studies and Criminology and Criminal Justice classes.

On March 17, Smith will host his seventh annual charity basketball game at Royal Farms Arena in Baltimore, which will include some of his current and former teammates, with all proceeds going toward the Torrey Smith Family Fund.

“[He’s] very political,” African-American Studies lecturer Jonathan England said in November. “[He’s] not shy about it, and I don’t know if [he’s] concerned about the repercussions. [He’s] more about the truth and justice than [himself].”

Smith averaged 897.8 receiving yards per season in his four years with the Ravens, winning Super Bowl XLVII. But Smith was unhappy with his performance when he signed with the San Francisco 49ers as a free agent in 2015 and took on a lesser role. He combined for 930 receiving yards during his two seasons in San Francisco.

Smith signed with the Eagles in March 2017 and has served as their third-option wide receiver. The 6-foot, 205-pound wideout recorded 157 receiving yards and one touchdown in three playoff games as the Eagles won their first-ever Super Bowl.

While Smith’s future in Philadelphia is uncertain — the Eagles could save money by releasing him — Smith said he’ll become more involved with the university when his football career is over.

Smith is one of the most well-known and successful Maryland football alumni. One of the loudest cheers during the Terps’ loss on Saturday came in the second half, when Maryland announced Smith was in attendance and displayed him on the jumbotron.

“I’m definitely thankful and blessed to be in this position,” Smith said. “I understand the power that comes with that. I understand the reputation that this university plays in that as well.”