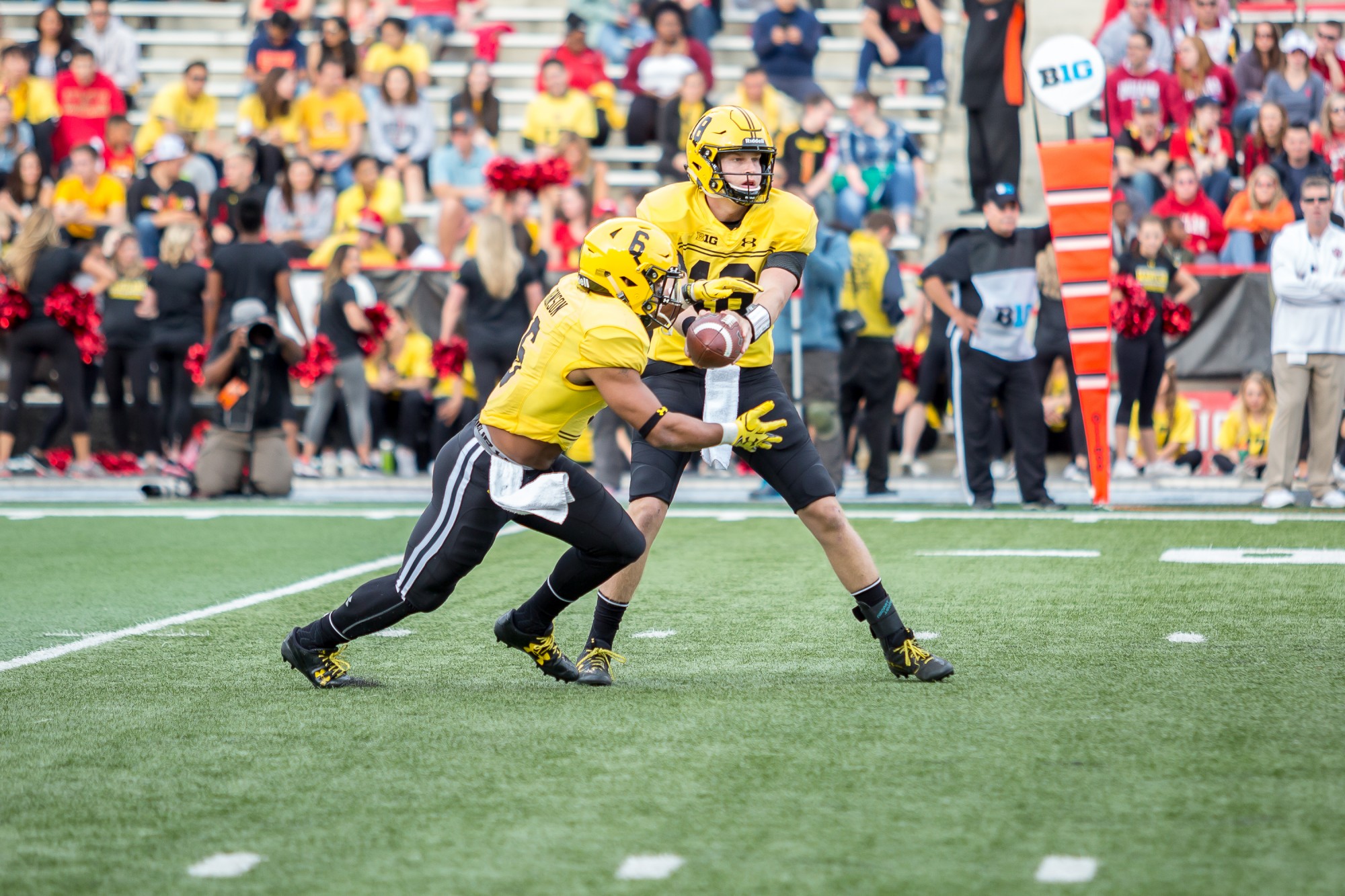 After running back Jake Funk bulldozed through Indiana’s defense for his second short-yardage touchdown Saturday night, the Maryland Stadium crowd roared in appreciation of the sophomore, who is often overshadowed by starters Ty Johnson and Lorenzo Harrison.

“It was awesome [to see],” quarterback Max Bortenschlager said. “I knew our guys up front would push them back, and then with Jake running, he’s a strong, powerful runner.”

Maryland’s victory keeps the squad in bowl contention with four games to play. It’ll need to beat Rutgers next weekend in Piscataway, New Jersey, and upset one of Michigan, Michigan State or Penn State to clinch a bid.

“We’ve been hit in the mouth several times [this season],” coach DJ Durkin said. “But it’s just a credit to our kids and their resiliency to just see it through.”

On homecoming night, the Terps traded their usual black, red and white uniforms for bumblebee yellow. The bright throwback jerseys imitated what the team wore during the early 1940s.

But during an afternoon dedicated to the past, the Terps managed to take a step forward under their second-year coach, overcoming first-quarter struggles to earn their first home win since Sept. 9.

Johnson and Harrison gained 91 and 66 rushing yards, respectively, to lead the offense.

Safety Darnell Savage’s career-best performance, meanwhile, helped Maryland keep the score close early on. He recorded his third interception this year, blocked a punt and returned it for a touchdown and made four tackles.

That enabled the Terps to survive a sloppy first quarter in which quarterback Max Bortenschlager didn’t complete a forward pass and the defense allowed 145 yards.

Linebacker Isaiah Davis mistimed a blitz on Indiana’s first possession, sprinting offside before the snap to give the Hoosiers a free play. Signal-caller Peyton Ramsey took advantage of the mistake by lobbing a 34-yard touchdown pass over the top of the Terps’ defense.

But Maryland entered a rhythm late in the half after Savage set up a 14-yard touchdown run from Harrison with his pick and returned the blocked punt for a score. Bortenschlager found wide receivers Taivon Jacobs and DJ Moore for touchdowns with less than three minutes remaining before the break, giving the Terps a 28-23 lead.

“At the end of the day you only get so many opportunities, so you want to try to try to make the most of it.” Savage said of his impact. “We only get 12 games that are guaranteed.”

Indiana appeared ready to take control after striking first in the second half with an 11-yard shovel pass to wide receiver Whop Philyor.. The Hoosiers also benefited from a questionable third-down roughing the passer call to set up a 41-yard field goal.

Durkin threw his headset after the personal foul, earning an additional 15-yard penalty. Maryland responded well to his energetic outburst, however, outscoring the Hoosiers, 14-6, in the final period.

After Funk’s two scores put Maryland ahead for good, the running back downed a Wade Lees punt at the one-yard line to make Indiana’s comeback attempt more difficult. The Hoosiers trailed, 42-39, with two minutes to go.

Indiana moved the ball to the 37 with the help of an unsportsmanlike conduct penalty on linebacker Jermaine Carter, but on fourth-and-10, Savage tackled wide receiver Luke Timian three yards from the first-down marker to seal the win.

Savage knew right away his tackle was good enough to stop the Hoosiers short, jumping to his feet to celebrate with his teammates.

“It was homecoming, and we were ready to get back on the right track,” Savage said. “We definitely had a lot of fire coming into this game.”