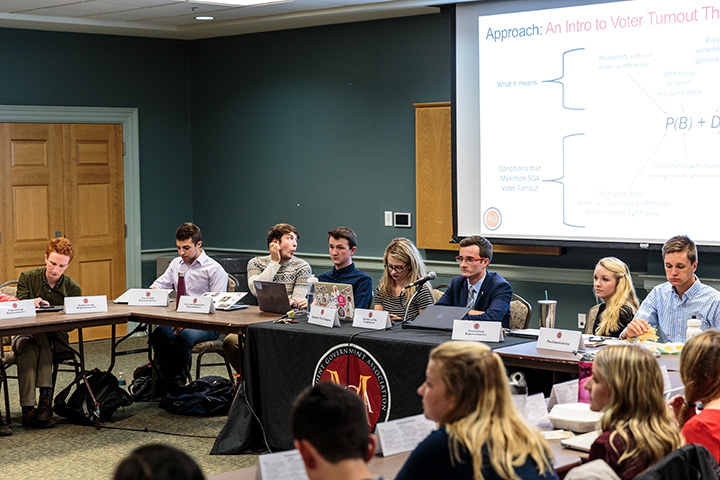 The executive board of the Student Government Association sits at their weekly meeting held in Stamp on Wednesday, September 6, 2017. (Tom Hausman/The Diamondback)

The resolution enables the student government to lobby for the bills, which are at the forefront of the immigration debate in Congress. Both the BRIDGE Act and the DREAM Act would codify DACA, while the DREAM Act would take further action to create a path to citizenship for the recipients.

The Student Government Association did not approve an amendment that minority student groups, including PLUMAS and other Latinx groups, requested to add to the resolution. Leah Barteldes, SGA speaker pro tempore and a junior public policy and government and politics double major, said the groups wanted this university to grant DACA students in-state tuition if DACA were to end, given the possible failure of bills like the BRIDGE and DREAM Acts in Congress.

The BRIDGE Act, which stands for Bar Removal of Individuals Who Dream and Grow Our Economy, would extend DACA for three years and allow recipients to continue living in the United States with federal permission, while the DREAM Act provides similar protections to DACA but also helps pave the way for recipients to receive permanent legal status or citizenship if they meet certain requirements.

The SGA plans to introduce this amendment as separate legislation during next week’s meeting, said Jonathan Allen, speaker of the legislature.

Student government members are trying to work with this university’s administration and peer institutions to capture the attention of key government officials who have spoken out on immigration reform.

“Many of our peers in the Big Ten have legislators who are on the fence and have a little more say into what will go on,” said SGA Director of Governmental Affairs Mihir Khetarpal.

Khetarpal, a senior economics and government and politics double major, said one of his goals is to coordinate with students at the University of Wisconsin and express joint support for DACA-related bills to House Speaker Paul Ryan, a Wisconsin representative.

The Association of Big Ten Students passed legislation at its conference this summer in support of a continuation of DACA, said SGA President A.J. Pruitt. Pruitt has been speaking with student governments at Big Ten institutions on a regular basis and plans to continue to work with them to express support for DACA through lobby efforts, he said.

Avi Schneider, a junior marketing major, spoke before the legislature to express the importance of the SGA voting in support of DACA.

“It’s really important for the community to show support for DACA students on campus to show that we stand by them and show this is something important,” Schneider said.”People under DACA should have the opportunity to do what they want and contribute to society.”

As of fall 2016, the University of Maryland hosts 113 students under DACA. The Obama-era program has granted temporary stay to some 800,000 young, undocumented immigrants since 2012.

James Kang, a junior kinesiology major, said he is happy that the SGA is “stepping up and supporting what’s right.”

“At a college level, people acting and supporting what’s right, I think that’s a really good thing and it’s got to start somewhere,” Kang said.

Originally, the SGA resolution called on the administration to reaffirm its support for DACA. On Tuesday, University President Wallace Loh issued a statement calling Trump’s decision to terminate the program “antithetical to the core values and missions of the University of Maryland and higher education generally.”

Allen, a junior government and politics major, said he was pleased to see the statement, but believes the issue requires further action from the administration.

“It seems like they’re in support of it and I’m happy they spoke out on this issue, but it’s not only about speaking out, it’s about actions,” Allen said. “I think going and lobbying on our own, but hopefully with an administration and having them [be] supportive would be great to see, but I think it’s a great step that they’re reaffirming their commitment.”