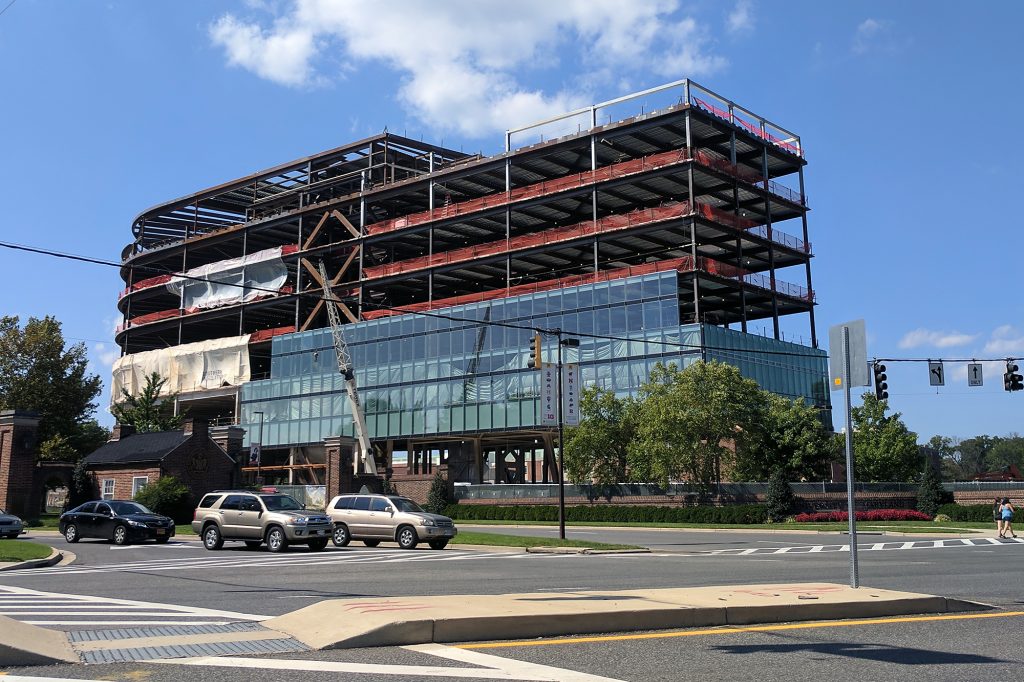 Construction on the Brendan Iribe Center for Computer Science and Innovation entered a new phase this summer, despite an August incident involving the death of a construction worker on the site.

“The project continues … we expect that within a month the steel frame of the building will be completed. Last week, they started installing the exterior glass on the southwest side of the building,” said Bill Olen, Facilities Management capital projects director.

Francois Odil Dishmey Kelly was working on the upper floor of the Iribe Center Aug. 3 when he fell down an elevator shaft. He was pronounced dead at the scene. Police do not suspect foul play.

Olen said he couldn’t speak about the incident because of the ongoing investigation, but “all is good on the project right now.”

[Read more: Worker dies on UMD campus after falling from building under construction]

There are no updates on the investigation because University Police are still awaiting results from the medical examiner’s report to determine the official cause of death, said police spokeswoman Sgt. Rosanne Hoaas.

According to Olen, construction is on schedule. It’s expected to be completed this time next year, with occupancy planned for January 2019, he said.

“I expect folks who come back to campus will be surprised and encouraged by the pace of construction,” Olen said. “There are a lot of folks looking forward to the building opening and what it will bring as far as innovation, entrepreneurship and new space for the college. So, I think there is a lot of good news and hope for that building.”

The Iribe Center project funding came from multiple sources, with $104 million coming from the state, $38 million from various private donors and another $9.7 million from the university, Olen said. The total project cost is about $152 million.

The Iribe Center’s mission is to support innovation and collaboration, said Neil Spring, a computer science professor who has worked closely with the project from the start.

“It’s just incredible to see the glass go up and to see the building taking shape. They’re getting really close to having the steel finished. You can watch the steel turn from that brown [color] to getting coated with that fire-proofing material,” Spring said.

All the Iribe Center’s classrooms are based around one of two designs replicated from the Edward St. John Learning and Teaching Center, Spring said — either a large lecture hall or a room with round tables meant to facilitate classroom discussion.

“Our faculty are teaching a bit in Edward St. John to get experience with that and see how that works,” Spring said.

The large auditorium in the Iribe Center will accommodate about 300 students, and smaller rooms will fit about 50 to 60 students, Spring said.

The building will also have virtual reality training facilities, a testament to the involvement of Brendan Iribe, co-founder of virtual reality company Oculus VR and a major donor to the project, Spring said.

There will be Oculus VR headsets and accompanying computers for classroom instruction as well as a 360-degree video viewing room.

“The building has space for not just virtual reality, but there’s a substantial space for experiment and construction of physical objects and robotics and all sorts of other research,” he said.

Harrison Linowes, president of this university’s virtual reality club, said he is excited for the new space, as well as the career training opportunities it will bring.

The club has about 240 members, with 50 to 100 people showing up to general body meetings and tutorials, Linowes said. He hopes the new facilities will grant greater access to students who wish to participate in the club.

“Right now, we’re kind of limited with our lab. It’s locked and unfortunately we can’t leave it open for everyone to come and go as they please, because of the expensive equipment,” the junior computer science major said.

People in many industries — including gaming, architecture, medicine and engineering — have been working out ways to incorporate virtual reality into their fields, Linowes said.

“Having the ability for students to graduate Maryland with some knowledge in this area … would definitely help them out.”