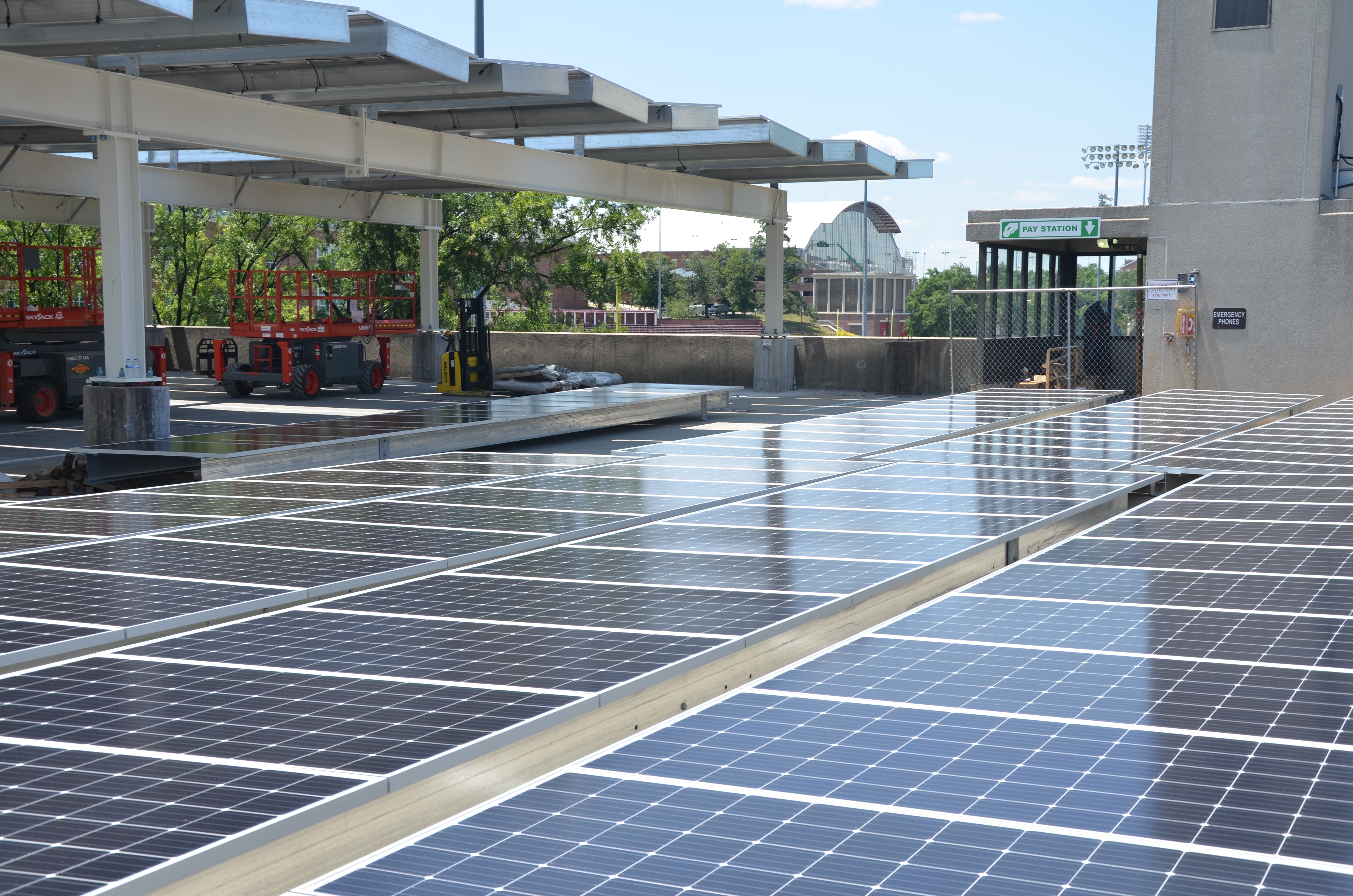 With help from three solar canopies nearing completion on top of the Terrapin Trail, Mowatt Lane and Regents Drive parking garages, the University of Maryland is expected to exceed its On-Campus Renewable Energy goal.

The goal, outlined in this university’s updated Climate Action Plan, was to generate 2.7 megawatts of solar power for university facilities by 2018. However, the solar power generated by the parking garages alone is estimated to be 2.1729 megawatts, greater than the projected 1.9 megawatts, said Sally DeLeon, the Sustainability Office project manager.

The energy produced by the canopies, which are metal beams supporting mounted solar panels, will combine with the energy generated by solar panels already in place at Shady Grove’s Institute for Bioscience and Biotechnology Research and the Severn Building to produce a total output of 2.946 megawatts, DeLeon said.

The solar canopies are a part of the President’s Purchased Power Initiative, an area of the Climate Action Plan that aims to ensure 100 percent of purchased power comes from renewable sources by 2020, DeLeon said.

The solar panels were made possible by a $250,000 grant from the Maryland Energy Administration, which this university matched dollar for dollar. Maryann Ibeziako, Facilities Management’s engineering and energy department director, said the grant money will subsidize the cost of purchasing energy over a 20-year contract with Washington Gas Energy Services, the company that installed the solar canopies.

Aside from the grant and matching funds, no other capital was required to fund the project, said Susan Corry, Facilities Management’s acting assistant director and energy manager. The project requires the developer to cover the cost of design, construction and maintenance over the 20-year contract. This university purchases only the energy produced from the solar canopy systems, she said.

“The actual total cost if we had to install it ourselves would have been about $8 million, so instead of doing that, we don’t own the equipment,” Ibeziako said. “The installer owns the equipment. We are just buying energy.”

The cost of energy from the solar panels will be slightly lower than it is now, which is about 11 cents per kilowatt hour, Ibeziako added. The university is expected to save about $1 million over the 20-year contract period, she said.

Corry said solar canopies were chosen because they maximize functionality and space constraints on campus.

“Solar of any kind takes a large physical footprint, because of the size and number of panels,” Corry said. “Those three parking garages that were chosen had the best exposure, not too much shading from nearby trees or adjacent buildings, and we had a large enough space where it was cost effective to put a larger system on those garages rather than some of the smaller garages.”

The canopies will generate about 2 percent of this university’s total purchased electricity. About half is already derived from the power grid, which the university aims to be entirely renewable by 2020; the other half comes from the on-campus combined heat and power plant, which generates steam and electricity by burning natural gas, Corry said.

Regardless, DeLeon said the solar canopies are a part of this university’s drive toward sustainability.

“It’s a big contributor to the university’s sustainability goals,” DeLeon said. “Although it’s a small portion of our purchased electricity, it’s tangible, visible, on campus, people can connect to it and see it. I think that’s really important for engaging people in sustainability, telling the sustainability story and keeping people interested.”

The grant that funded the solar canopies also allowed DOTS to get two additional charging stations for electric cars to be placed in Regents Garage, said Valerie Goubeau, DOTS assistant director and the department’s manager for the solar canopy project.

Goubeau hopes the charging stations will alleviate the demand by electric and hybrid car owners who commute to the campus.

“Regents is the only garage in this project that’s getting charging stations,” Goubeau said. “We’re unsure, at this point, if there would be the demand in Mowatt or Terrapin Trail Garage for additional charging stations, but we know that there is a lot of demand for charging stations here at Regents in the center of campus.”