Maryland football prevails, 31-13, in a fight with Rutgers to clinch bowl eligibility 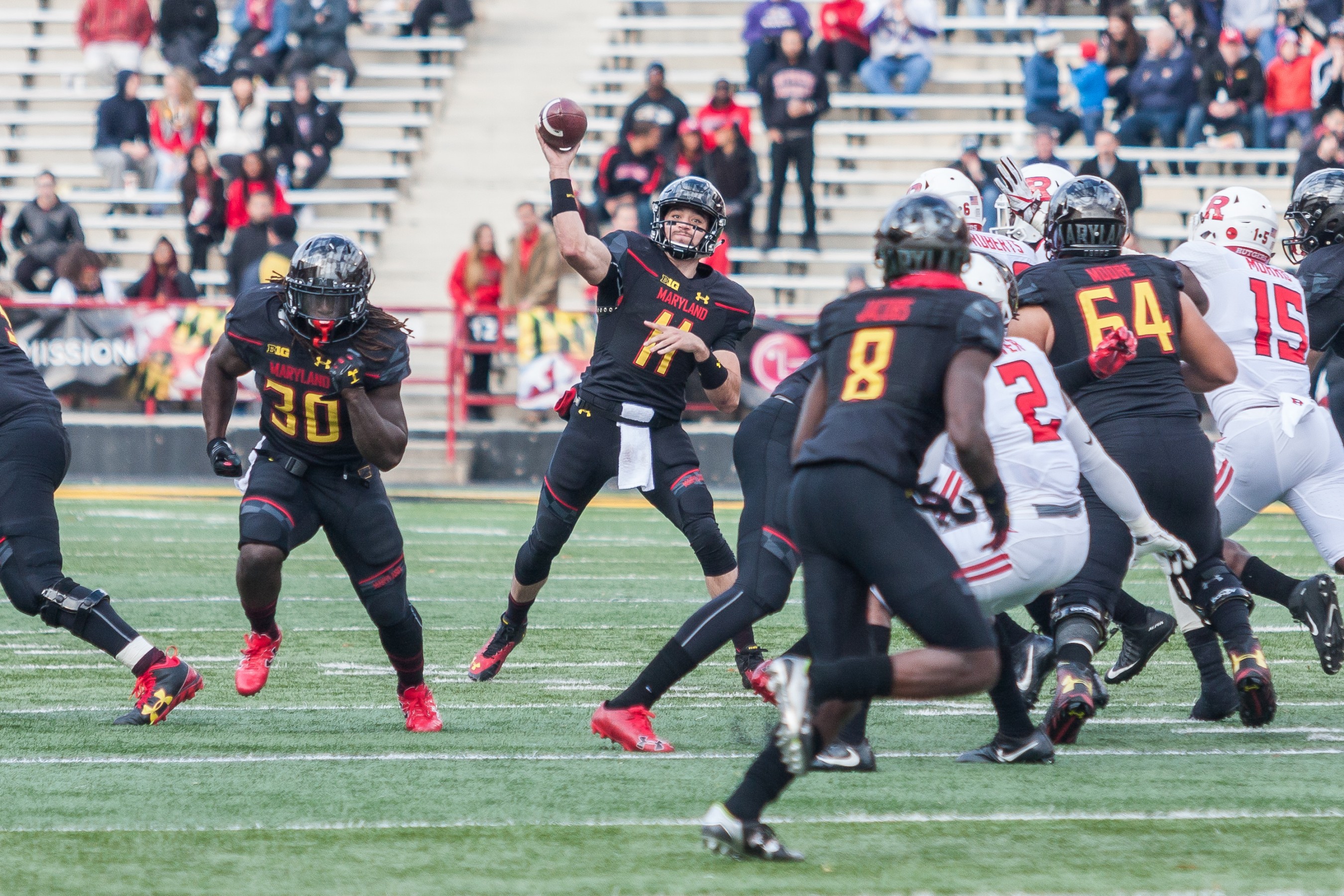 The Maryland football team emerged worn down from one win in its last seven weeks of effort. The stretch included three consecutive games against top-20 foes, two of which headline the College Football Playoff debate. Quarterback Perry Hills cycled through the starting lineup with shoulder injuries, while the reserves delivered uneven performances.

So this week, coach DJ Durkin and his staff turned to inspiration from the boxing ring. Throughout Gossett Team House, the Rocky Balboa theme song blared. Saturday’s clash with Rutgers was the team’s fifth and final chance to clinch bowl eligibility.

“This is the 12th game of the season, so coaches are trying to signifying this is the 12th round,” defensive lineman Azubuike Ukandu said earlier this week. “Pull out all the stops.”

After weeks of enduring blows from Big Ten powers, the Terps delivered the regular season’s knockout punch, a 31-13 victory in Maryland Stadium to clinch a postseason berth in coach DJ Durkin’s first season at the helm.

“You are who your record is,” Durkin said, his voice speeding up. “We’re 6-6. We’re eligible for a bowl game, and I think when you look at where we’ve come from, where we started and what we’ve got, I think it’s a tremendous achievement for our guys, and I think it really shows and tells you where this program’s heading.”

Hills, who started all six wins, returned from his bout with shoulder injuries to play his first complete game in a month. He and the team’s other seniors participated in the pregame Senior Day honors, each sharing an embrace with Durkin, posing for a picture and greeting their families. They then jogged back to the tunnel to run out for the last time with their teammates.

Throughout the week, Durkin preached the team’s motivation for the seniors, the group of players who had endured losing seasons and a coaching change but welcomed the rookie leader’s new energy and tactics for their final College Park campaign.

That’s why Durkin gave the first two carries to senior running back Kenneth Goins Jr., a converted full back who worked this year to find a role in the Terps’ up-tempo offense and on special teams. He responded with a 46-yard, career-long gain on the second touch to reach the end zone for a 7-0 lead.

“He’s earned that in more ways than just being a senior,” Durkin said. “It wasn’t like we just started all seniors today at every spot. That obviously had something to do with it, but it’s more about what Kenny has done for us and meant to us as a leader.”

Goins’ rumble sparked the Terps’ ground game after weeks of futility, when it failed to eclipse 100 total yards in perhaps the program’s toughest ever three-game slate. Last week, the Terps had 11 rushing yards. Saturday, Maryland finished with 318 against the Scarlet Knights defense that ranks 124th out of 128 FBS teams against the run.

Running Ty Johnson paced with 11 carries for 168 yards. Backup quarterback Tyrrell Pigrome made an appearance with a 28-yard score off a reverse handoff. Senior reserve fullback Andrew Stefanelli also took a one-yard plunge on his first career carry to cap the Terps’ scoring.

“We were just excited,” Hill said. “Just pumped to play and go put it on the line for everyone on the team because we’re truly a family, and we’re truly brothers.”

The defense reversed its recent slide, too. Michigan, Ohio State and Nebraska combined for 149 points, but the Terps revived its pass rush against Scarlet Knights quarterback Giovanni Rescigno, finishing with seven sacks.

Linebacker Jermaine Carter, a few days removed from a one-on-one meeting with Durkin to discuss his aggression and leadership, paced the charge with a career-high 15 tackles, an acrobatic interception early in the third quarter — he ripped the ball away from a Rutgers receiver deep in coverage — and two sacks.

His second came when the Scarlet Knights attempted 4th-and-8 midway through the fourth quarter. He barreled through the line, pulling down Rescigno for a 13-yard loss and igniting a roar from the announced 30,220 fans at Maryland Stadium.

As Carter ran to the sideline, Durkin waited for a hug with his arms raised above his head, reminiscent of the iconic Rocky pose.

“I was exhausted, but it was a good feeling,” Carter said. “One thing that coaches always preach is to always have energy and celebrate with your teammates no matter the situation.”