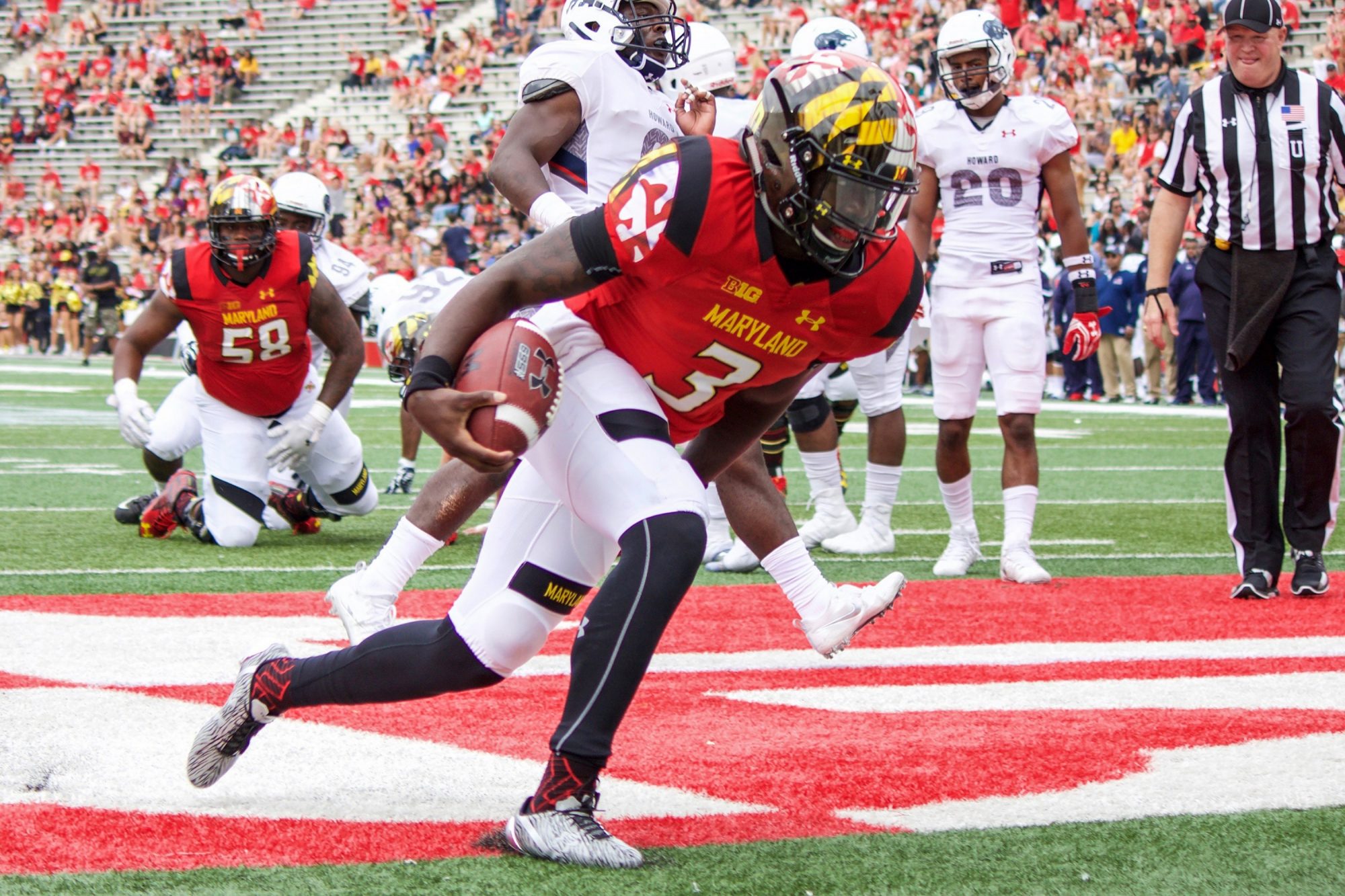 Maryland football freshman quarterback Tyrrell Pigrome isn’t who we thought he was.

He’s excelled in relief entering the Terps’ game with Minnesota on Saturday, but he isn’t a first-year phenom, one who could replace quarterback Perry Hills and navigate Maryland through a strong Big Ten schedule. He scored on his first play against UCF and Penn State but hasn’t shown consistency in longer stretches.

That opportunity came against the Golden Gophers at Maryland Stadium when Pigrome started in place of Hills, who was out with a shoulder injury. In the 31-10 loss, the rookie ran the ball 25 times for 2.8 yards a carry, completed 18 of his 37 passes, took three sacks and threw two interceptions. He managed a Terps offense that totaled 100 yards through the first three quarters.

Pigrome again showed flashes of his potential, but for most of the game Saturday afternoon, he looked like a freshman quarterback against a Power Five defense.

Coach DJ Durkin defended his first-year signal caller in his opening statement after the game, and his points were valid.

The Terps committed nine penalties, many of which negated long gains. Pigrome darted through the right side for about 30 yards in the second quarter, but officials negated the play on offensive lineman Damian Prince’s hold. On the next drive, running back Lorenzo Harrison dodged several defenders for a 21-yard gain on 3rd-and-20. Wide receiver Teldrick Morgan drew a yellow flag for a hold on the play.

Durkin also criticized the pass protection. The offensive line didn’t give him enough time, the first-year coach said, which may have caused Pigrome to be anxious in the pocket.

“I know the story will be about our freshman quarterback in Piggy and all that,” Durkin said, “but the guys around him need to play better, too. We didn’t help him out. There’s a lot of blame to go around.”

Still, there were mistakes Maryland fans weren’t accustomed to seeing over the team’s first five games.

Pigrome began the second drive with an interception. He rolled out to his right and unleashed a ball that landed in defensive back KiAnte Hardin’s hands inside the Terps’ 40-yard line. Minnesota kicker Emmit Carpenter then missed a 36-yard field goal.

Maryland wasn’t as fortunate after Pigrome’s second turnover. At Minnesota’s 22-yard line, the Terps had a chance to cut the deficit to a touchdown with about a minute left. Instead, defensive back Antoine Winfield Jr. caught Pigrome’s pass and ran it back 81 yards to put Minnesota up, 31-10.

The Golden Gophers loaded the box, daring Pigrome to throw, and he met their demands with 37 pass attempts. Hills, meanwhile, has thrown the ball 80 times through five games this season.

Most of Pigrome’s passes were on a line, which caused several overthrows on deeper routes. On one play in the third quarter, Morgan ran free down the middle but couldn’t catch up to Pigrome’s bomb. Had Pigrome put more air under it, Morgan would have likely tracked it down and ran into the end zone.

In other instances, Pigrome wouldn’t even release the ball. Shortly after taking the snap, he’d look for a running lane. Some of those decisions came from a lack of pass protection, but Pigrome rarely checked all of his progressions before taking off.

Minnesota seemed to expect these tendencies from Pigrome.

“We tried to play many of our small guys on the perimeter that we could against Tyrrell because he’s like a water bug,” Golden Gophers coach Tracy Claeys said. “He’s hard to tackle, so we wanted quicker guys to keep him contained and make him go back towards the middle and take as many hits as he could.”

The 41,465 fans at Maryland Stadium still saw what makes Pigrome a promising player. Throughout the game, he used his shiftiness to make Minnesota defenders miss. He displayed his throwing accuracy when he found wide receiver D.J. Moore in tight coverage for an 11-yard touchdown in the fourth quarter.

Overall, this was a learning experience for Pigrome. He’s not as dynamic as he’s shown at times entering Saturday’s contest, but his skillset lends itself to becoming a formidable dual-threat quarterback.

He’s just not there yet.