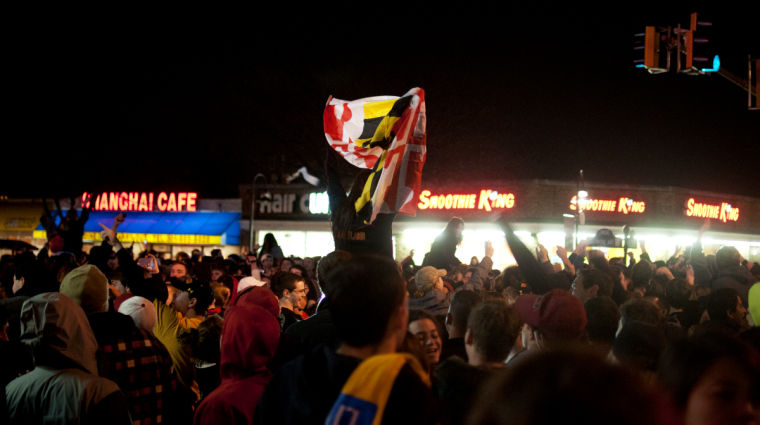 Students celebrate Maryland's victory over Duke on Route 1 near the intersection with Knox road.

As fans rushed the court of Comcast Center after the Terrapins men’s basketball team’s win over Duke, 83-81, students across the campus took to the streets. The celebrations come nearly three years after students last rioted for a Terps win, another upset at home over Duke.

Students lined Route 1 from the entrance to the campus to Ratsie’s. Two students were arrested for disorderly conduct and crowds lit fires, broke a light pole and ripped signs out of the ground. Students’ celebrations, though, were mostly confined to shouting cheers and chants, crowd surfing, and climbing poles and roofs.

11:00 p.m.: All roads are now re-opened, University Police tweeted. The department did not make any arrests and report no campus damage.

There are more than 10 park police horse trailers parked on Calvert Road, which never made their way to Route 1. Police took similar precautions last year.

10:35 p.m.: Crowds are beginning to disperse as students walk from Route 1 back toward the campus.

10:00 p.m.: Within two minutes of students setting fire to a bunch of newspapers at the intersection of Knox Road and Route 1, officers had extinguished the flames.

Firetrucks that approached in an attempt to clear Route 1 past Knox Road have retreated.

9:42 p.m.: There were live wires coming from the light pole that crowds broke down but officers have cleared them out.

Both of the arrests made on Route 1 were for disorderly conduct, county police tweeted.

9:40 p.m.: A fight broke out and another individual was arrested by officers. A flare on the ground drew a crowd outside Ratsie’s before the flame subsides and firecrackers continue to go off in the area.

Several officers are standing on the roof of Yogiberry. Shuttle-UM buses have been instructed by the Department of Transportation via radio to avoid driving anywhere south of Campus Drive.

“No buses are serving downtown,” said an Orange route Shuttle-UM driver. “The closest you can get is the M Circle.”

Students are lifting each other up on their shoulders. One female student in the middle of Route 1 flashed the crowd; shortly after, a male student began crowd surfing.

Others are forming a crowd around a traffic light at Knox Road, trying to tip it over.

9:20 p.m.: Students have broken down a light pole by Shanghai Cafe. Officers respond as students chant “USA, USA,” “F— that lamp,” and “Bring the horses.”

Several people have climbed onto the roof of Ratsie’s. Others set off more firecrackers and fireworks in the middle of Route 1.

9:12 p.m.: One male individual has been arrested — he had climbed the Knox Road and Route 1 street sign and taken off his shirt, drawing a crowd of people chanting and setting off firecrackers.

9:10 p.m.: Route 1 is packed with people from the entrance of the campus to Cornerstone Grill and Loft, with people continuing to chant and climb street signs and traffic lights. Several Prince George’s County Police officers are stationed at Knox Road, blocking the streets.

9:05 p.m.: Toilet paper is hanging from trees along Route 1 and one student began to climb the Knox Road and Route 1 street sign.

“No. 1, f— Duke. No. 2, we’re the best team in the country. No. 3, we’re the best at rioting,” said senior accounting major Mick Thompson, who was among students gathered near Ratsie’s.

9:00 p.m.: Students are streaming toward Route 1, knocking over trash cans and smacking and kicking signs. Several people are attempting to pull signs out of the ground. People are standing on top of the Route 1 guard rail stretching from Potbelly’s to Ratsie’s and are lined up past the Bank of America.

“It gives us something to burn and we have bad reputations of burning couches; this way we can burn something and do it basically to celebrate,” Oldach said. “This is a huge win because it’s the last time we’re playing Duke at home, so it’s something I’m going to remember for a really long time.”

8:45 p.m.: University President Wallace Loh said there is a university-sponsored bonfire on Chapel Field to celebrate. Hundreds of students are congregating.

8:42 p.m.: A firetruck and several police cars are stationed at 4212 Knox Road behind South Campus Commons 1 and the small bonfire has been extinguished. In the road in front of 4219 Knox Road, an overturned trash can is smoking.

8:39 p.m.: Students are flooding out of their apartments and doors heading for Route 1. Several people started a small fire on the lawn of a Knox Box. Sirens can be heart over cheers of “Let’s Go, Maryland!”