Volleyball loses both matches in fifth set over weekend 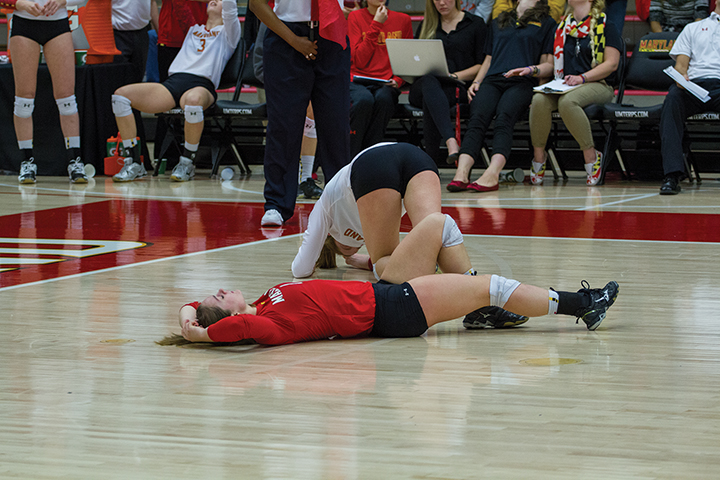 Libero Sarah Harper (in red) remains on the floor after the Terps fall 3-2 to North Carolina on Nov. 24, 2013 at Comcast Center.

Mary Cushman and Sarah Harper lay sprawled next to each other on the Comcast Pavilion court, the volleyball bouncing away just out of their reach.

The Terrapins volleyball outside hitter and libero had fallen to North Carolina in each of the five matchups against the conference foe over the past four years, but in the Terps’ final ACC home match of the season, they had an opportunity to reverse the trend down the stretch.

After entering the break trailing, 2-0, the Terps rallied back to win the next two sets and force overtime. The Terps then forced match point four times, but failed to convert each time.

As the final whistle blew yesterday, all the two seniors could do was slump on the floor as the No. 14 Tar Heels stormed together on the opposing side of the net in celebration of their 3-2 victory. The Terps also fell to Pittsburgh, 3-2, on Friday.

“My heart sank,” coach Tim Horsmon said. “My heart sank for my coaching staff who works unbelievably hard, and for my seniors [in their] last ACC match here. To our team who has continued to give and work at this, it’s hard.”

After the Terps took an 8-7 lead to begin overtime, the teams switched sides. The Terps were within one point of clinching the upset four times, the last when outside hitter Ashleigh Crutcher pounded her match-high 25th kill of the night.

But then Tar Heels outside hitter Hayley McCorkle hit two consecutive kills and Horsmon burned a timeout. Finally, McCorkle ended the match, sending an attack out of Cushman and Harper’s reach.

“I felt deflated,” middle blocker Adreené Elliott said. “And I know my teammates did too because we expected to win, and it didn’t come to fruition. So it’s hard to accept that.”

Horsmon added: “So many things can happen in volleyball. That one of those didn’t fall somehow, is pretty tough to swallow.”

The Terps (13-17, 5-13 ACC) put pressure on the Tar Heels in the first set, riding Crutcher’s eight kills to a 24-22 lead. Just as they have all season, however, the Terps had trouble finishing the set. Trailing 28-27, middle blocker Kelsey Hrebenach leapt for a block attempt, but the ball instead sailed out of bounds, giving North Carolina the set.

The Tar Heels easily captured the next set as well, sending the Terps into the locker room 25 points away from a sweep.

But setter Amy Dion didn’t want the Terps to end their home slate in disappointing fashion. The sophomore told her teammates they needed to fight and keep pushing.

“Sometimes we need to get our butt in gear,” Harper said. “She’s one of the best motivational speakers I’ve ever had on a team.”

The Terps responded by winning the third and fourth sets. They nearly dropped the third set after capturing a 21-13 lead. North Carolina (26-3, 15-3 ACC) fought back, eventually tying the set at 26. Hrebenach and Elliott finally blocked an attack to seal the victory.

The Terps faced similar circumstances Friday, falling to the Panthers in five sets.

The Terps registered 24 blocks yesterday, the second-highest mark for an ACC team this season. They had 17 blocks Friday.

An upset yesterday likely wouldn’t have pushed the Terps much closer to postseason contention, as they entered the match ranked No. 117 in the RPI. But Horsmon and the Terps yearned for the opportunity to close out their home slate on a high note by defeating their rival.

“It was difficult,” Crutcher said. “Fighting and losing in the end is the worst thing to do.”

After the match had finally ended, the band had left and the fans had dispersed from the bleachers, Harper stood near the net, glancing from side to side at the court where she has played for the past four years.