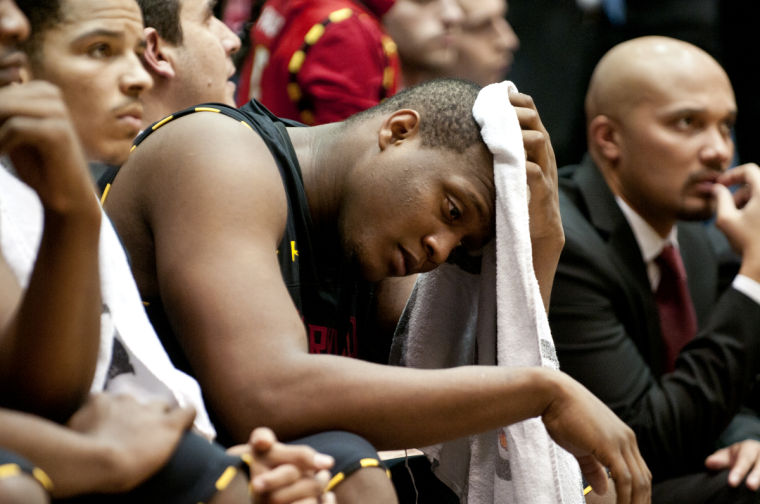 Charles Mitchell admits he used to be a fat kid. The Terrapins men’s basketball forward grew up adoring fried chicken and pepperoni pizza, feasting on the greasy foods whenever he got the opportunity.

But it didn’t take Mitchell long to realize there’s little room for grease in ACC basketball. Soon after arriving in College Park last summer, the freshman traded in the Domino’s for fresh-made salads. He dropped 18 pounds from his 6-foot-8, 260-pound frame and started making plays in practice his previously doughy physique rendered impossible.

The new-look Mitchell went to work Saturday during an 84-64 Terps loss at then-No. 1 Duke. He finished with 13 points and seven rebounds, six of which came on the offensive glass. The Marietta, Ga., native shot 5-of-8 from the field and netted two straight free throws early in the second half as the Cameron Crazies berated him with chants of “Please don’t eat me!”

Yet Mitchell devoured the offensive boards all afternoon. He used his hulking size to create space down low, nabbing Terps misses for several easy putbacks in the first half. Mitchell had eight points in less than four minutes of play by halftime, and he was the key reason the Terps had hauled in nearly 60 percent of their misfires.

“Charles gave us a big lift on the boards that helped,” coach Mark Turgeon said shortly after the Terps notched their fourth defeat in six games. “[Duke’s] defense gave us fits, but it also allowed us to drive the ball and do some things.”

Less than halfway through his first conference slate, Mitchell has already emerged as one of the ACC’s most efficient rebounders. He ranks in the top 20 league-wide with 6.2 rebounds per game despite averaging just 16.5 minutes.

“Offensively, he was really good,” Turgeon said. “But he was equally not as good on the defensive end.”

Sloppy play on defensive reads marred an otherwise noteworthy night for Mitchell. Though he finished tied for the team-high in points, Turgeon felt uncomfortable with his play on the other side of the ball and limited him to just 13 minutes on the day.

After the game, Mitchell expressed particular disappointment with his ball-screen defense. He said he failed to rotate at the end of screens, allowing Blue Devils guards wide-open shots around the perimeter. Those lapses helped Duke shoot 52.4 percent from the field and finish 11-of-22 from beyond the arc.

But as for his offensive outburst? Mitchell shrugged off the suggestion that he showed marked improvement Saturday. Sure, he may have showed off a few new low-post moves against Duke. But nothing was drastically different, he said. He still created opportunities off offensive rebounds, and he still didn’t wander farther than a few feet away from the basket.

“It’s just the rebounding and tip-backs,” he said. “It’s getting a little better as it’s progressed during the season.”

Mitchell, who is averaging 6.1 points per game on 55.7 percent shooting this season, has proven critical in hostile road environments in recent weeks. When the Terps slogged their way through a turnover-prone first half at North Carolina earlier this month, Mitchell was one of Turgeon’s only players who seemed unfazed. He finished with nine points, 11 rebounds and just one giveaway against the Tar Heels.

“Charles is not scared of any environment,” Turgeon said. “He just goes in and plays.”

Not bad for a 19-year-old who concedes he wouldn’t have lasted more than eight minutes in a college game a year ago. And that’s not because defensive miscues would’ve necessitated bench time. No, he just wouldn’t have been able to run up and down the court.