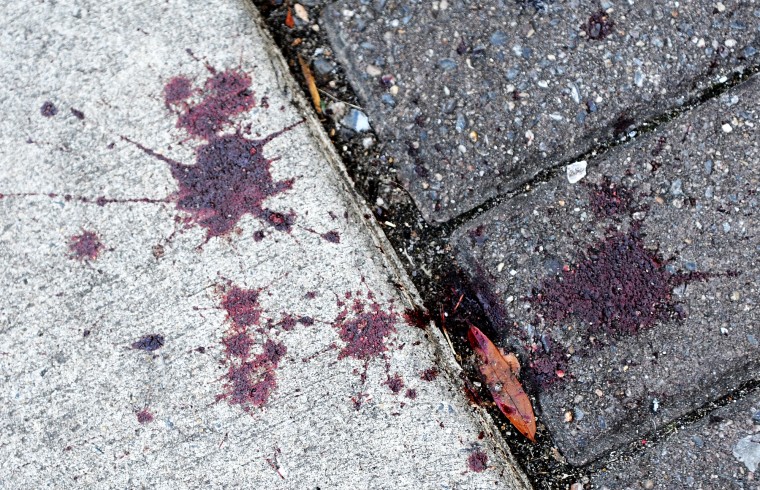 Bloodstains from yesterday’s stabbing remained visible through the afternoon along the Knox Road sidewalk from Cornerstone Grill and Loft to Ledo Restaurant.

It started over a seat and ended in bloodshed.

As many as 10 people, including eight students, were involved in a fight early yesterday morning that began in Thirsty Turtle, spilled out onto Route 1 and left three students with stab wounds, police and student witnesses said.

Jose Ramos, 23, who is not a student here and was questioned by police last night, was also stabbed in the fray.

According to a bouncer who works at Turtle, Ramos and an unidentified man police are still seeking re-entered Turtle after taking a smoke break in the early hours of yesterday morning and demanded seats at the bar in Turtle’s back room from students believed to be members of the Pi Kappa Alpha fraternity.

“There were plenty of open seats,” said the bouncer, who asked to remain anonymous because he was not authorized to speak to the press. “They were just being idiots.”

The bouncer and a student witness said it appeared Ramos and another man instigated the brawl. Police described the other man involved as a Latino male, 6 feet 2 inches tall, with a slim build and a black mohawk, wearing a T-shirt and blue jeans. Although he has not yet been identified, police assembled posters with an image of the man captured from a Turtle security camera and distributed them at last night’s College Park City Council meeting.

Police could not say whether the two non-students knew each other before the incident.

Ramos told Prince George’s County Police officers he met the other man at the bar. He also said that his injuries — stab wounds on the right side of his torso — came as he tried to break up the fight outside.

After a brief scuffle inside, Turtle bouncers tossed all of the men involved out onto the street, sending the students toward Potbelly Sandwich Shop and the two non-students toward Ratsie’s, the bouncer said.

“The two dudes just kept talking shit,” he added. “They mooned them; they were asking for it.”

What ensued isn’t completely clear, but the result was a brawl that occurred outside of Cornerstone Grill and Loft that left bloodstains on the sidewalk still visible yesterday afternoon.

Police said the unidentified man produced a folding knife at some point during the brawl, which witnesses said appeared to involve eight students.

When the dust cleared, three students discovered stab wounds on their bodies: junior Amir Itani and sophomores Erik Gaul and Matthew Stevens. Although police would not comment on how each individual student was injured, two found wounds on their backs and the other’s cheek was cut. Another student, Scott Krasnoff, a junior, was punched in the face and suffered injuries to his mouth.

District 1 Commander Robert Liberati said a knife was found outside Cornerstone when police arrived at the scene shortly after 1:30 a.m. but couldn’t say if it was the knife used in the fight.

Ramos headed south on Route 1 after being stabbed, police said. He was picked up by county officers, who flooded the area after a Shuttle-UM driver and other witnesses called 911.

Of the students involved in the incident, police said at least three were drinking inside Turtle despite being under the legal drinking age. But University Police Chief David Mitchell said he has no intentions of punishing them for their involvement in the incident.

“We have never taken action against a student when they’ve been a victim of a crime because of the fact that they have consumed alcoholic beverages — never,” Mitchell said at a news conference yesterday afternoon. “It would be too great of a disincentive, providing that obviously they’re the victim of a crime.”

Thirsty Turtle might not be so fortunate, however. Mitchell has already drafted a letter to the Prince George’s County Board of License Commissioners, which oversees liquor license distribution, asking that Turtle’s license be reviewed — and soon.

“If they’re attracting the Freddy Kruegers of the world, then that’s just unacceptable,” Mitchell said in an interview last night.

Police, who have interviewed the victims and student witnesses, said some were too intoxicated to give helpful information.

Davis, who spoke at the news conference, said that could hamper the judicial process.

“It puts law enforcement in a tricky situation when we can’t even get statements from our victims,” he said. “And it’s a defense attorney’s dream come true to have victims who are intoxicated, who can’t make good IDs, who can’t recall the series of events that led to the crime.”

County police said the investigation is ongoing and have asked anyone with any information about the incident to contact them. Posters bearing the surveillance photo of the unidentified man will be distributed on and around the campus in coming days.