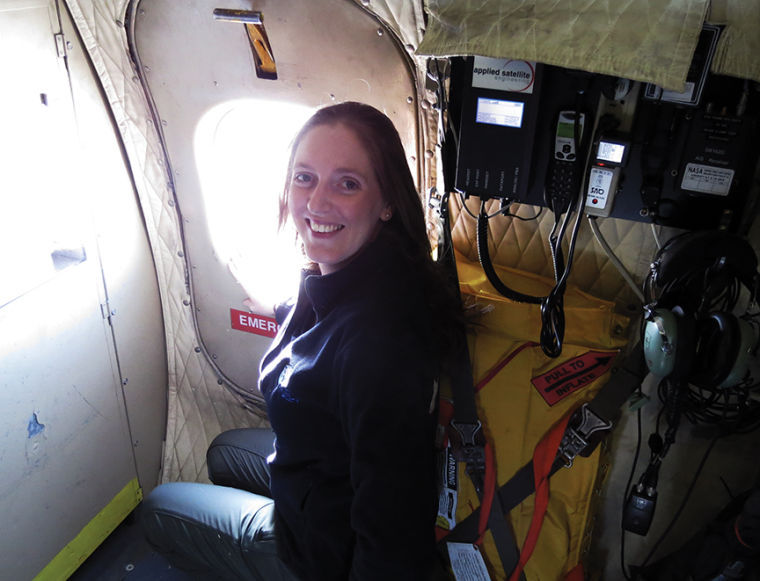 CORRECTION: Due to a reporting error, this story incorrectly stated the number of team members in Operation IceBridge. The article has since been changed to reflect this correction.

The Weddell Sea bordering Antarctica is a vast stretch of frozen ocean as far as the eye can see.

The frigid area isn’t a destination spot for most people. But for Sinead Farrell, it’s paradise.

“[It’s] the most beautiful thing that I’ve seen,” said Farrell, a university research scientist with the Earth System Science Interdisciplinary Center. “The sea ice stretches on forever in every direction. Very desolate and very remote.”

Farrell has been working with sea ice since she was an undergraduate student at University College London. She recently accompanied a team of scientists from different universities and federal institutes to Fairbanks, Alaska, on a NASA mission called Operation IceBridge. So far, the team has spent nine days measuring the thickness of Arctic ice and snow in the Greenland Ice Sheet to better understand how the polar environment has been responding to climate change, Farrell said. This particular operation will continue through 2017 and will hopefully overlap mission ICESat-2, which should launch around that time, she said.

The ice is measured using a technique called altimetry, which involves going on long flights, about eight hours each, and bouncing electromagnetic radiation off the Earth’s surface, she said. Scientists with Operation IceBridge have been measuring the thickness of Arctic ice and snow since 2009 and have discovered various trends, she said.

Over the years, the sea ice in the Arctic has changed dramatically, shifting from a makeup of mostly old ice that remains frozen all year to mostly seasonal ice that melts and regrows each season, Farrell said. The ice is much more vulnerable to climate change because it is not as thick, she added.

This could prove catastrophic for Arctic animals, such as polar bears, that depend on the sea ice for survival. But some Arctic territories may see economic benefits with the opening of shipping lanes and more opportunities for oil drilling, Farrell said.

Those benefits come with a drawback: They have caused a drastic shift in the way people view and access the Arctic, said Jackie Richter-Menge, a colleague of Farrell’s and a research engineer with the Army Corps of Engineers.

“This was an environment that was largely inaccessible,” Richter-Menge said. “You’ve got an increase in folks that want to access the Arctic and take advantage of it.”

Economic interests, however, should not trump environmental concerns, Richter-Menge said.

“We have an environment that’s changing very rapidly,” she said. “We must continue the effort to make the U.S. community aware of the fact that we are an Arctic nation and what’s going on in the Arctic affects us.”

Richter-Menge, who began working with sea ice in 1981, said the job has changed, meaning Farrell will face myriad challenges throughout her career. Not only has the technology drastically improved, but there is an increased need for it because the ice is changing so quickly, Richter-Menge said.

Phil Arkin, deputy director of the Earth System Science Interdisciplinary Center, said this is an urgent issue deserving of the public’s attention.

“I think it’s critical for the general public, whether it’s students or anyone else, to be aware of what’s going on in the environment,” he said. “For most people, it’s not their hobby or field of study, but it falls into the realm of being aware of your surroundings. [The Arctic] is a little farther away, but it still affects people’s lives.”

Although working in below-freezing temperatures on a tight schedule with little sleep is far from easy, Farrell said fieldwork is why she loves her job.

“The environment we work in is difficult, no doubt about it,” she said. “It’s a great opportunity. It’s such a pristine environment. Once you start doing sea ice research, it’s hard to give it up.”

Even though the Arctic is remote, it greatly affects the rest of the world and deserves everyone’s attention, Richter-Menge said.

“If you have any questions about climate change … look to the Arctic for answers,” she said. “It provides extremely apparent evidence of climate warnings. We need to have a smart conversation about that, and people need to be informed.”