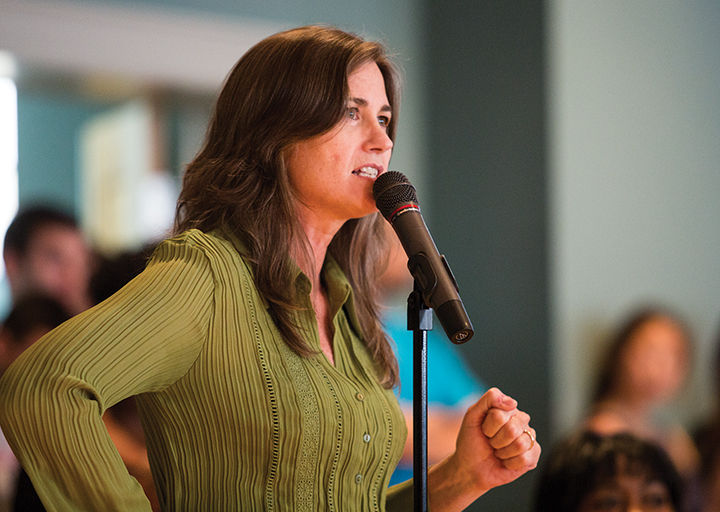 Title IX Officer Catherine Carroll responds to a student question at a town hall meeting to discuss issues of racism and sexual violence on the campus and in Greek Life on April 2, 2015.

A record number of University of Maryland students were expelled for sexual assaults in a one-year period beginning in July 2014, according to Office of Civil Rights & Sexual Misconduct data.

Before the 2014-15 academic year, the Office of Student Conduct fully investigated one or two sexual misconduct reports a year, and few investigations — if any — led to expulsions, said Andrea Goodwin, the student conduct director.

“In the one year that [Title IX Officer Catherine Carroll] has been here, set up this office, set up this elaborate set of machinery, policies and procedures,” university President Wallace Loh said, “this is the first time I’ve been faced with three expulsions in one year.”

The “vast majority” of those accused in these complaints were men, Carroll said. The Title IX office cannot reveal the identities of students involved in a complaint and therefore could not provide a more specific gender breakdown.

Fifteen complaints resulted in a voluntary resolution between the two parties, according to the report. In 10 cases, the complainant did not want to continue with the investigation, three cases didn’t have enough evidence to complete the investigations, and six were pending investigation as of June 30. 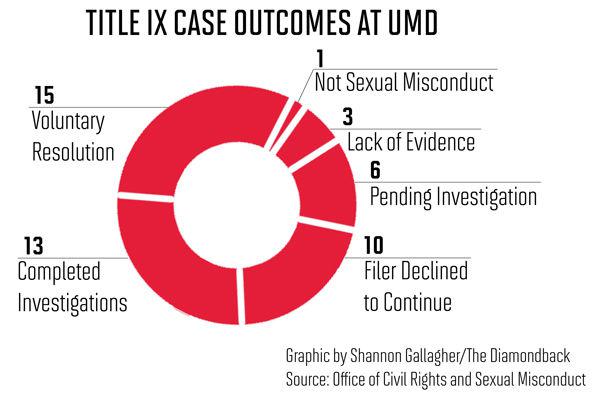 When the U.S. Education Department released a list in May 2014 of schools under investigation for their handling of sexual violence and harassment complaints, this university was not on it.

However, Loh said he requested that the university’s Title IX office provide a public report of its cases and outcomes so the campus community would know how administrators deal with these issues.

“We should be a campus free from any sexual assaults,” Loh said.

For now, though, the university must contend with a rising number of sexual misconduct complaints and a Title IX office ill-equipped to handle the growing influx.

While University Police reported 21 on-campus rapes in the past three years in its annual security report, the Title IX office received 20 rape complaints in its first year.

After McLaine Rich was assaulted in October 2014, she wasn’t going to file a complaint or make a police report.

But after revealing the assault to her Zeta Tau Alpha sorority chapter at a meeting and realizing the number of people who had faced similar situations, the senior psychology major changed her mind.

“Eight people came forward and talked to me in a week, and one person that came forward [mentioned] the same person as me,” Rich said. “And that was only in a week, after speaking in one meeting.”

She filed a report with the Title IX office March 31. Title IX investigators aim to complete their reports within 30 business days, according to the university’s student sexual misconduct complaint procedures. After the investigation phase, reaching a resolution takes an additional four to five weeks.

“I was terrified to go to class,” said Rich. “I’d have nightmares that he was going to break into my house. There was just all this emotional trauma the whole time when the investigation was going on.”

The Title IX office employs two investigators to handle all sexual misconduct complaints. There are times when complaints go unaddressed because the investigators need to finish current cases before picking up new ones, Carroll said.

While the office aims to resolve complaints within 60 business days, circumstances out of its control — such as witnesses who are unresponsive or winter and spring breaks — can lengthen investigations, Carroll said. If a situation warrants an extension, both parties will be notified in writing, the procedures state.

“Even if you go forward without the information, they’re just going to come in and say, ‘Well you didn’t talk to the people I wanted you to talk to,’” Carroll said. “So it’s sort of a dance.”

Despite working closely with the student conduct office and the Department of Resident Life to complete these investigations, the office is forced to handpick which cases to investigate.

“In the world of triaging and prioritizing resources, the sexual assault cases get more attention because of the severity of the incident,” Carroll said. “You can have a sexual harassment case with a ton of witnesses, but then if you get three rape cases in a week, the timelines get a little mixed up.”

Of the six pending investigations, half are rape cases, two involve sexual harassment, one deals with stalking and one involves relationship violence.

Cases themselves are highly stressful, with students and parents on both sides crying and yelling in the office. Carroll said she worries her staff will burn out. The office recently hired a civil rights investigator to add to its team.

“Three investigators for [52,000] people — I don’t think anyone would argue that’s going to be adequate,” Carroll said.

Had Rich known her case would take a year to resolve, she said she might have acted differently.

“We were still on the campus at the same time,” Rich said. “I didn’t want to file a restraining order with the police. It was hard to get out of bed in the morning, much less go to class.”

Rich since has helped found Preventing Sexual Assault, a club that advocates sexual assault prevention and serves as an outlet for members to channel their frustration and sadness and work toward progress.

Hannah Grimes, a sophomore communication major and vice president of Preventing Sexual Assault, also faced a traumatic experience after her Sexual Assault I report to the Title IX office, she said.

“I was having panic attacks because he lived in the same area,” Grimes said. “I was afraid to be on my own. I ended up losing 10 pounds because I wouldn’t eat; I was afraid of seeing him on the same part of campus.”

While the Title IX and student conduct offices found a preponderance of evidence that the alleged perpetrator case did assault Grimes, a standing review committee found him not responsible, Carroll said.

The Title IX office offers a variety of interim measures to ensure the safety of both parties as it investigates a case. Grimes filed a no-contact order through the Title IX office, but she still dreads seeing her alleged assailant on the campus, she said.

Interim measures can include “any sort of things that you can think of in your daily life that may need to shift or change so that you’re not going to be in contact with that person or not wanting to see that person,” Carroll said.

Final sanctions vary as well, with expulsion, suspension and lesser punishments all on the table. 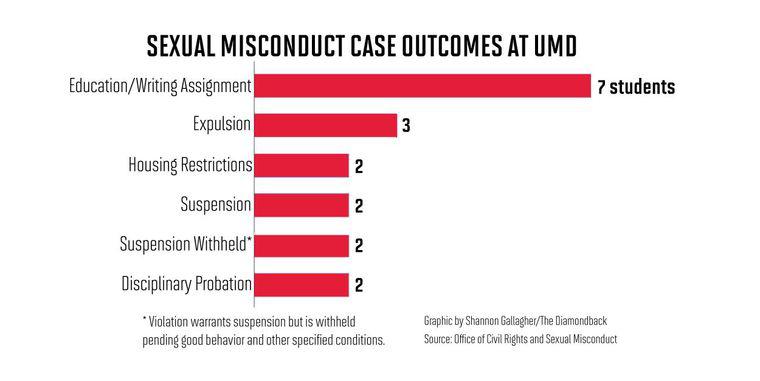 A standing review committee of five students, faculty and staff determined the sanctions for these cases, in accordance with previous interim procedures. The university updated these procedures this semester to give the student conduct office the authority to determine sanctions, Carroll said.

In one rape case that ended in suspension rather than expulsion, there was a lack of participation from the student who filed the complaint, Carroll said.

“I don’t want to see similar cases be treated differently because the victim engages or not,” Carroll said. “When you have five people, they can vary in what they think is an appropriate sentence. What creates a problem is, why would I have a similar case where there’s suspension and another one that’s expulsion because five different people on one committee decided expulsion and five people on another committee decided suspension?”

“Right now, I think the university is ignoring that [sexual misconduct] is a blatant problem,” Grimes said. “There’s a problem here, and it’s everywhere, and it’s not being talked about.”

Carroll’s office reports directly to the president’s office, however, Loh said he meets with Carroll “not very often.”

Carroll was on the agenda to present the 2015 misconduct report to Loh’s cabinet last week; however, other issues came up, and she did not end up presenting, Loh said.

“We had other things to discuss and we never got to it,” Loh said. “The intent was for her to summarize, but the cabinet doesn’t make changes to it, so we basically all got copies of it, and I’ll have an opportunity to chat with her later.”