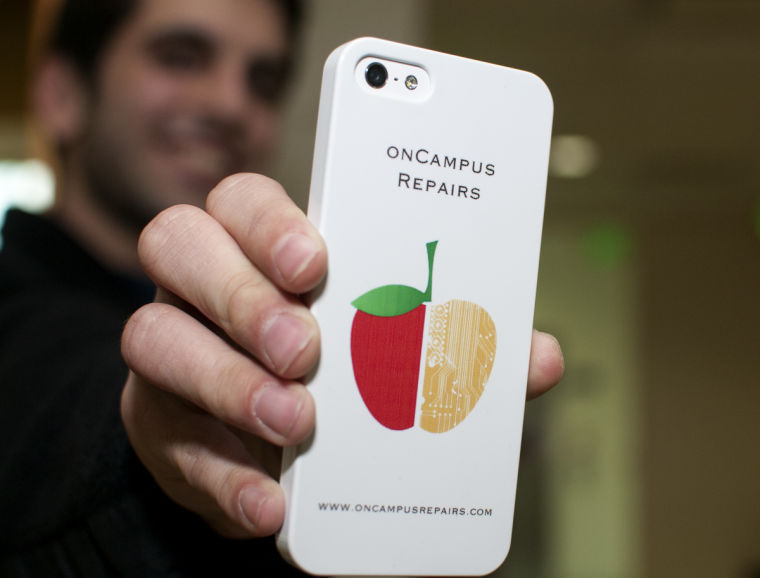 The logo for OnCampus Repairs is displayed on Harrison Baum's iPhone case.

For Harrison Baum, fixing iPhones is a labor of love.

He’s not an engineering major, and he has no background in business. But with nothing more than a passion, a set of instructions and a willingness to take a risk, the senior economics major created onCampus Repairs, an iPhone repair business.

Growing up, Baum loved to find the secrets behind technology by taking gadgets apart and putting them back together. It was also a means of bonding with his father, who designed security equipment and also started his own business in college.

“In high school, I would always tinker and take stuff apart and if I ever had a question, I would run into his office and he would answer it,” Baum said.

Toward the end of high school, Baum began investigating the structure of cell phones, noting the complexity of smartphones, with their paper-thin wires and fragile frames.

“I have so many people bring me phones that they’ve tried to fix themselves and ended up just messing up the whole thing,” Baum said.

Most fragile of all was the glass-cased iPhone. And from what Baum saw upon arriving at the university, the only thing as common among this university’s students as the iPhone was a broken iPhone screen.

“I saw everyone was walking around with a cracked screen, and it’s like, ‘Wow, I could definitely do a good business fixing them,’” Baum said.

He launched his business at the end of last spring, charging just $70 for a broken screen — among the lowest prices on the market, Baum said —and repairing phones within an hour.

What began as an experiment with testing his skills on friends’ broken phones quickly caught on with other students, and now, Baum fixes between 50 and 70 phones a month.

Though he’s quick, repairing a phone is a complicated process, Baum said. It takes him 37 steps to replace the screen of an iPhone 4.

“I had to make sure that I was 110 percent familiar with everything in the phone, because you can’t screw around with and mess up other people’s phones,” Baum said, adding that he was nervous at first. “I’ve done 1,000 to 1,500 phones so far, and I haven’t messed up a single one, but there’s really no room for error.”

His passion for technology goes beyond just screen repairs — Baum will look at any problem.

“This past winter break, my sister’s iPhone had water damage and I asked him if he could take a look at it,” said junior accounting major Hermela Hailemeskel. “He was able to fully fix it — and for a fair price, too. He is seriously the doctor of iPhones.”

And if he can’t fix it, he’ll buy it from you. If a phone is beyond repair and someone plans to upgrade to a new phone, he said, he’ll take it anyway, refurbish it and sell it overseas.

There’s a huge market for expensive American smartphones in Asia, Baum said. A refurbished iPhone 4 can go for as much as $600 in Russia, China or the Middle East.

Baum also learned how to unlock phones, making them usable anywhere in the world. Among those in Baum’s line of work, unlocking methods are closely guarded trade secrets. Though the process is technically illegal in the U.S., Baum assures his own method doesn’t break any laws and is 100 percent legitimate.

But whether the repair is being done for someone on the other side of the globe or in College Park, Baum takes pride in his customer service — though it’s sometimes hard work to balance his time, he said.

“There’s been nights where I literally worked straight through the night, didn’t sleep and went to class the next day,” Baum said. “Sometimes, it can be ridiculous as a full-time student.”

But helping students is worth the lost hours of sleep, he said. Customer satisfaction has earned him a 100 percent satisfaction rating on eBay. He refuses to let customers pay him until they see their fixed phones, and he promises to match any lower repair price a customer might find.

“I haven’t heard of people going to other places, and I’d like to think that’s why, but I do know there are a few other places on campus that do it,” Baum said.

“I think its awesome that there’s a Maryland student that has enough business and is able to sponsor us,” said Hank Rich, Terp Thon supply and logistics chairman.

Ultimately, Baum plans to put his earnings toward opening an assisted living home with a friend after college. In the meantime, he’s working on expanding his business. While he currently only fixes iPhones, Baum wants to work on Android phones as well. He also wants to offer onCampus Repairs at other schools and train new employees.

“The job offer is that you fix phones on the campus for me, and I’ll pay your tuition,” Baum said.

There are many different definitions of success, but for Baum, it meant being able to pay his parents back for college.

“I saved 95 percent of [my earnings] in a college fund,” Baum said. “I’d love to thank everyone who initially trusted me, used my service, spread the word. It helped me pay for college — I couldn’t ask for more than that. It meant so much to me that I had the opportunity to pay for my tuition.”

His parents said they never asked for the money — it was Harrison’s motivation that pushed him.

“I am very proud of him, not just for his continuing success, but for his business ethics — he doesn’t want anything given to him without working for it,” Ron Baum, his father, wrote in an email. “The fact that he has offered to pay back for college — he is getting closer by the month — was of greater value to me then the money involved.”

Starting and running his own business has been an educational experience for Baum, the self-taught repairman said.

“I feel like I’ve learned so much more from this than I would in any class,” Baum said. “I love business and I love technology. I love doing stuff like this and dealing with people, so hopefully I can keep this going.”