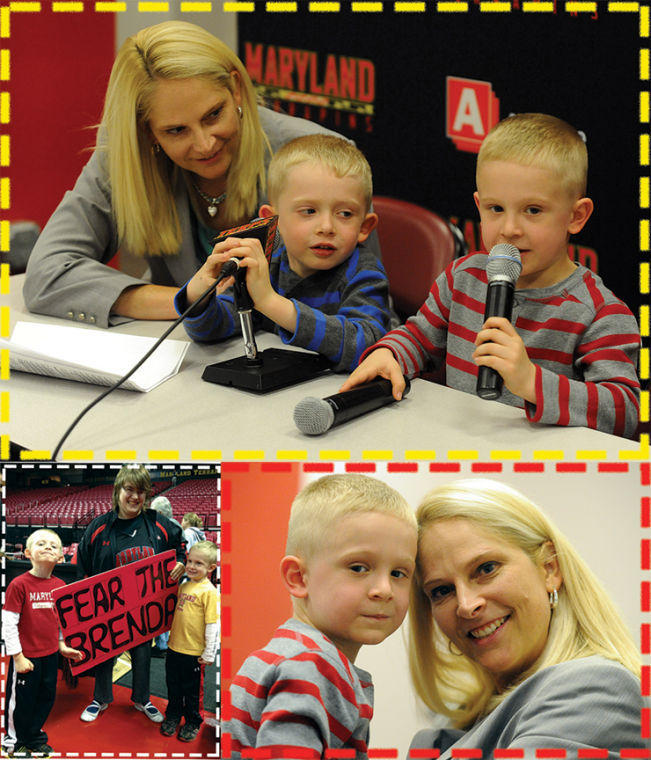 Tyler, the son of coach Brenda Frese, had spent the weekend in Charlottesville, Va., celebrating his fifth birthday with his twin brother Markus surrounded by the team he’s been a part of his entire life.

But the photograph’s peaceful facade only tells part of Tyler’s story. The preschooler has undergone extensive treatment for leukemia since being diagnosed as a 2-year-old in September 2010.

Sunday, the No. 8 Terps host No. 5 Duke at Comcast Center in a matchup that carries weight in both the national and ACC postseason races. But it’s also the third Team Tyler game, an annual event to raise awareness and money for cancer research. It’s all part of the growing Team Tyler Foundation.

Everything changed after Tyler’s diagnosis. Frese still had her usual roles — basketball coach, mentor, mother — but she suddenly had a cancer-stricken toddler to raise. Given Frese’s full workload, Thomas was charged with taking care of Tyler and administering his medication on a daily basis — something he still does today with the help of alerts and reminders on his iPhone.

As Frese spread the word to current and former players after the diagnosis, Laura Harper, Marissa Coleman, Kristi Toliver and Shay Doron — four starters from the 2006 national championship team — banded together to start the Team Tyler Foundation, a nonprofit aimed at raising money for childhood leukemia research.

Since then, it has slowly expanded its reach. It presented its first donation to Johns Hopkins Hospital on Jan. 27, 2011, at the first Team Tyler game. This season, Howard County’s Apple Ford Lincoln Mercury car dealership donate to Team Tyler every time the Terps score a 3-pointer — 96 occasions entering Sunday’s matchup.

The impact of Tyler’s diagnosis and subsequent fight against cancer was an overwhelming process, Thomas said. But with his progress against the disease, an end is finally in reach. Tyler will take his last dose of medication Dec. 3.

“I can feel like I’ve started to slowly exhale a little bit, and I’ve gained a great appreciation for what’s going on outside of our little bubble,” Thomas said. “It’s really amazing to me when you see how many people out there care. … It’s so easy to think that there’s so much negativity in the world, and when something like this comes along, it really opens your eyes to how much positivity there is.”

The family recognizes support everywhere it goes. People are always asking how to help, how to contribute or just how Tyler is doing, Thomas said. Other schools — including Duke, Purdue, Loyola and UMBC — contributed to the foundation. And it continues when Frese comes to work.

The players see Markus and Tyler running around Comcast Center, their own personal playground, seemingly without any cares. It provides perspective for a Terps team navigating three torn ACLs and a treacherous schedule.

“It just shows leukemia is a lot bigger than what we’re going through,” forward Alyssa Thomas said. “For him to just fight through that and still be happy and full of energy just shows that maybe our aches and bruises, you can put those aside to just go out for a greater thing.”

Frese said the Terps provide role models and an extended family for her twin boys. When Markus and Tyler play basketball with their parents at home, they imitate each player and organize their own pregame introductions — right down to each Terp’s name, number and hometown.

“That’s like the greatest feeling you could have in a way, when you see people have love for your children,” Mark Thomas said. “I see that every day when my kids come around the team. They can never give me a greater gift than that.”

Sunday isn’t the first time this season the Terps will raise awareness for cancer. They participated in Play4Kay Pink Games against Clemson and at Virginia this month, and participated in the nationally televised Jimmy V Classic at then-No. 2 Connecticut in December.

“It’s an easy venue for us to be able to bring maximum exposure through this game, through television, through obviously the vehicle of me being a head coach here at Maryland,” Frese said. “We feel like we can bring more attention to cancer and the fight, and so I think that’s the exciting part, just feeling the responsibility to be able to help with this fight.”

There’s still a long way to go for Tyler, his brother and his parents. After his final dose of medication, Tyler will still have routine checkups for a year and a half before he’ll be completely cancer-free.

“This has been a more than three-year-long tunnel that we’ve been traveling through, and really for the majority of it, it’s a long dark tunnel and you don’t even see the light at the end of it, but now we’re getting to the point where it seems like that light is visible,” Thomas said. “Dec. 3 is when we’ll step into the light.”

TERPS NOTE: The Bel Air-based There Goes My Hero foundation, which works to expand the bone marrow registry and find matches, will be at Comcast Center to register donors before Sunday’s game.