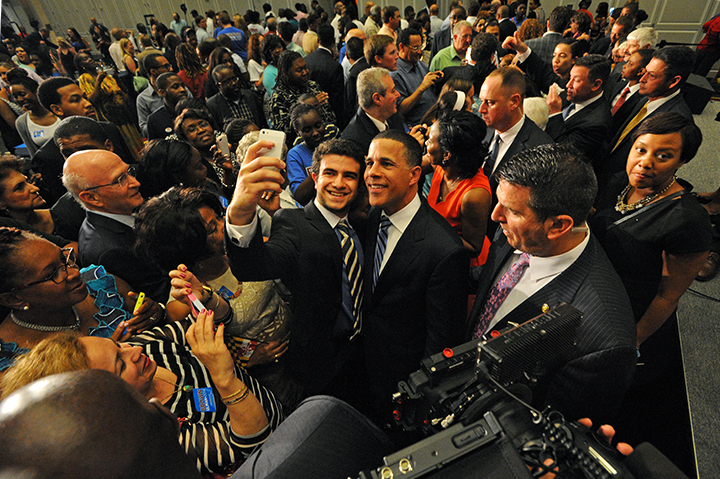 Lt. Gov Anthony Brown takes a selfie with a supporter at his primary campaign party at the University of Maryland's Riggs Alumni Center on June 24, 2014.

Lt. Gov Anthony Brown takes a selfie with a supporter at his primary campaign party at the University of Maryland’s Riggs Alumni Center on June 24, 2014.

Lt. Gov. Anthony Brown won the Democratic gubernatorial nomination for primary Tuesday with 51.4 percent of the vote and will face Larry Hogan in the general election on Nov. 4.

Brown led in the polls throughout much of his campaign against Attorney General Doug Gansler and Del. Heather Mizeur, who earned 24.2 percent and 21.7 percent respectively. Brown celebrated after the results were announced with family, friends and supporters at the Samuel Riggs IV Alumni Center on the campus, and he thanked the audience for its help throughout the campaign.

“While others have stood by, Anthony Brown has constantly stood up for working families,” Ulman said. “Supporting jobs in Maryland, investing in our schools in Maryland.”

“I think people basically wanted to make sure they had a steady hand in the governor’s office,” Cummings said. “They knew they had Anthony Brown working with the governor, and believing that a groundwork would build on what O’Malley has already done.”

Cummings said he is excited to see Brown win the primary election and have the chance to be the state’s first black governor.

“The idea that Marylanders were so progressive that they were able to look beyond color and see the heart and the talents of a man is very significant and I am so very proud of my state tonight,” Cummings said.

Brown’s campaign focused on bringing jobs to the state and continuing the economic progress he said he helped make with Gov. O’Malley.

“We protected our workers, we raised the minimum wage, we strengthened our economy and we’ve got a plan to make it even stronger,” he said.

Baltimore County was even closer, with Brown getting 37.5 percent, Gansler earning 30 percent and Mizeur receiving 29 percent.

About 20 percent of registered voters cast ballots in the Democratic primary Tuesday. In his concession speech, Gansler attributed the low voter turnout to frustration among Maryland voters, a sentiment Cummings echoed.

“We’re in a very difficult time right now,” Cummings said. “A lot of people are very frustrated all over the country. A lot of them have suffered economically, and I talked to some people today and they said they want a sense of hope.”

After conceding the primary to Brown, Gansler tweeted an acknowledgment to his opponents.

“I want to congratulate [Brown] on his victory and I want to thank [Mizeur] for bringing progressive values to the discussion,” he wrote.

Mizeur received a surge in support late in the race. She had gotten less than 10 percent in polls before May, then rose to 16 percent in a June 10 Washington Post poll before reaching 22 percent.

“There were a lot of skeptics who said I would never make it this far,” Mizeur told her supporters after conceding the race. “People who lead from fear told me to get back in line. But together, we showed them the power a movement can have when we work together for positive change.”

Recent university alumnus Matthew Popkin said he voted for Mizeur and though she did not win, he is glad her messages were part of the discourse and he was impressed by her public campaign finance model.

“The Maryland primary is an opportunity to show what voters … want,” said Popkin, a former candidate for College Park City Council. “If she receives a decent amount of support right now, it will show that publicly financing a campaign, which is a bold move in the first place, has a chance to work for the future.”