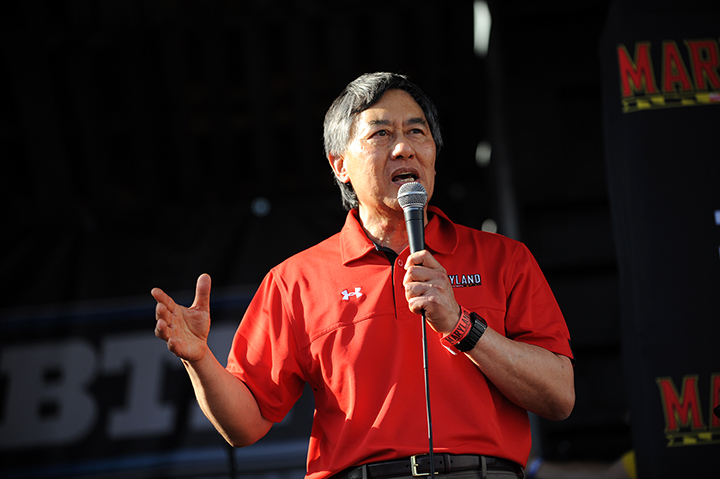 University President Wallace Loh addresses the crowd at the Big Ten welcome block party outside of Nationals Park in Washington D.C. on June 30 2014.

University President Wallace Loh addresses the crowd at the Big Ten welcome block party outside of Nationals Park in Washington D.C. on June 30 2014.

When the University of Maryland announced in November 2012 its move from the ACC to the Big Ten conference, administrators were ready for an onslaught. You might remember this university proactively retaining a PR firm to manage fan backlash by hatching a Russian government-style plan to flood message boards with pro-move sentiment.

It turns out the university’s preparation for responses to the move went deeper than that. Last week, my colleagues Matt Schnabel and Ellie Silverman sat for an interview with university President Wallace Loh. It was Loh, remember, who stood in front of the cameras after making the final call that the university would turn B1G. From there, we’ll let Loh tell it:

“For about seven days, I had round-the-clock police protection. Even people who were here had no idea how intense the opposition was. Now, fortunately, I was prepared for it psychologically because my whole staff told me, ‘Don’t do this. This will be a firestorm.’ And there was a firestorm.”

Loh alluded to University Police worries about his safety:

“The police, our police department, is very, very good. They monitor things all of the time. All sorts of threats, they monitor. They were on social media checking on everything. … They said, ‘We’re going to provide you with security whether you like it or not.’ ”

Wondering how extensive the protection was?

“They were parked outside my house while I was sleeping.”

University spokesman Brian Ullmann said the measures were taken “out of an abundance of caution.”

“For obvious security reasons, we don’t discuss the specifics of our security operation,” she wrote in an email. “We do provide numerous security services for a variety of constituents and occasions, including President Loh as needed.”