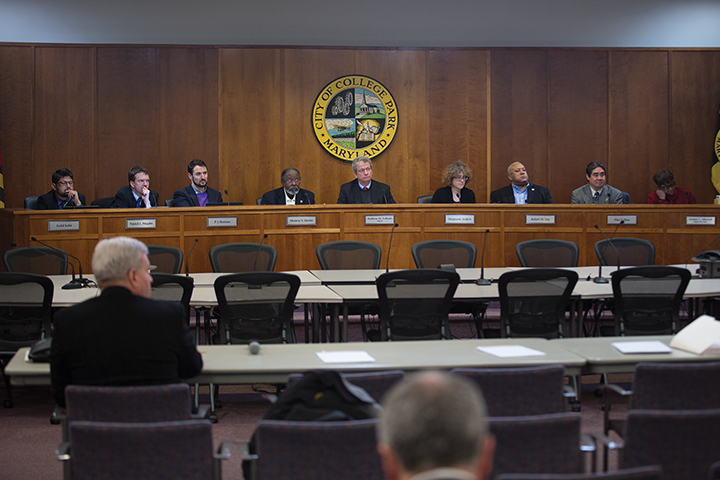 The rattling of nickels and quarters stuffed into cars’ tiny change drawers might no longer be heard in College Park.

The College Park City Council approved an agreement with MobileNOW! for a three-year exclusive license for pay-by-cell parking services. The deal, approved Feb. 11, will enable residents and visitors to pay for parking through a smartphone application. Users will also be able to pay online or by a phone call.

“I often find myself scraping the change drawer for quarters when I go out most times,” District 2 Councilman P.J. Brennan said. “But having this additional convenience encourages people to park in our city more easily and may even make the collection of revenue more convenient as well.”

The parking service will work at about 13 city pay stations, according the official agreement, and it could expand to the city’s 312 on-street metered parking spaces.

The deal won’t cost the city anything, but users will be charged 35 cents per parking transaction. They’ll then receive free text-message reminders about their meter times.

The electronic parking option could be available by the summer, District 1 Councilman Fazlul Kabir said. Residents and visitors will still have the option to pay with coins.

“You won’t need to worry about the change and the coins. Everyone nowadays has phones, cellphones, iPads, smartphones, so it makes sense,” Kabir said. “We are not taking away any option. We are just adding more options.”

Brennan said he hopes this adaptation will encourage residents and visitors to park in the city and spend time in the area.

“What we’ve seen in other cities is that it just creates a new efficiency in a culture that’s adapting a lot of smartphones and integrating apps that make life more convenient,” Brennan said. “We’re making parking more convenient for people.”

Because the service is freely available to the city, Mayor Andy Fellows said he supports the practicality of a pay-by-phone parking option. After the initial presentation on Jan. 29, he did not see this option “to be arousing any kind of controversy or discussion” and thought the idea itself was sensible.

“This will allow people to change their time without going back to their cars,” District 3 Councilman Robert Day said. “And that is a quality-of-life issue.”

Although this seems like a simple addition to city life, Brennan said, it has the potential to make a greater impact.

“I know it sounds like a kind of simple thing to do, but areas where we can find those conveniences encourage people to come to our retail, to our restaurants, to visit friends or to attend events and make the parking part of it less of a hassle,” Brennan said. “I think that improves people’s quality of life.”