Bitcoin continues to grow but university researchers suggest some changes 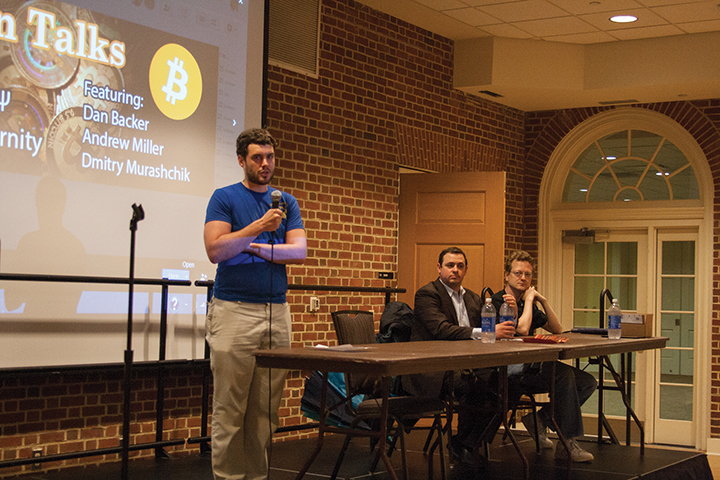 Guest Speakers Andrew Miller, Dan Backer and Dmitry Murashchik talk about bitcoin at an event hosted by Zeta Psi in Stamp on April 30, 2014.

Guest Speakers Andrew Miller, Dan Backer and Dmitry Murashchik talk about bitcoin at an event hosted by Zeta Psi in Stamp on April 30, 2014.

In the world of digital finance, online payment system Bitcoin has been growing quickly since its software debuted in 2009, with millions of dollars’ worth of bitcoins being exchanged on a daily basis. But researchers at this university said the computational resources the system requires could be better used with some changes.

Forbes reported in December that bitcoin mining, the power- and hardware-heavy process used to add bitcoins to the market, uses $15 million worth of electricity per day. In response, researchers at the university’s computer science department, in collaboration with Cornell Tech and Microsoft Research, developed and recently debuted Permacoin as an alternative that repurposes energy consumed by bitcoin mining to archive and preserve data.

“Bitcoin is a secure system that is unique in that it requires a lot of computational power,” said Andrew Miller, a university computer science doctoral candidate who helped develop Permacoin along with university professor Elaine Shi and Maryland Cybersecurity Center Director Jonathan Katz. “On one hand, it seems to need to expend this much power to have the security that it does overall, but on the other hand, it would be nice to … recycle some of that power so that it can be used in multiple ways, just like any other form of recycling.”

To earn bitcoins, people use hardware called bitcoin miners to continuously solve repetitive computational puzzles, known as scratch-off puzzles, for the chance to earn more than they spent on the resources, Miller said. But the problems users are asked to solve serve as pointless work with no real purpose, he said.

“[It’s] really wasteful because you have all these people who make tons and tons of hash computations, which is essentially useless work,” Katz said. “We started looking at the question of whether or not it would be possible to come up with a modification that would add a useful benefit.”

Permacoin seeks to use bitcoin mining hardware to provide needed data archiving services from the entire mining user base. It works by attaching data to be stored to each computation before users can receive their incentive. In theory, Bitcoin users would have enough computational power to archive the Library of Congress through the Permacoin system, Miller said.

“If you want to make attempts at solving this puzzle, you have to have a storage device that’s storing a data set we care about,” Miller said.

At this point, there are no plans for Permacoin to be implemented on a large scale, but the researchers said the possibility is valuable on its own merit. According to them, it is possible for Permacoin to take off as an altcoin, a subset of currency, or for the concept to be incorporated into the main Bitcoin protocol, but the group’s main hope is that it opens up new discussions for the potential of the system.

“Hopefully people will like the idea that … with the computational power producing greenhouse gases, maybe you’re trying to do this for something more,” Shi said. “We hope people will help each other and feel better if they are contributing something to society.”