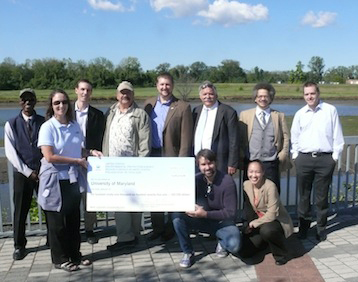 Sen. Ben Cardin poses with agriculture professor Paul Leisnham and other members of the project.

Sen. Ben Cardin poses with agriculture professor Paul Leisnham and other members of the project.

Chesapeake Bay pollution has been worsening for several decades, but a team of university researchers are combating it with the help of a groundbreaking $700,000 grant from the Environmental Protection Agency and some community support.

Stormwater runoff is one of the fastest-growing causes of contamination, which is why the project will target two runoff “hot spots” — Howard County’s Wilde Lake watershed and Washington’s Watts Branch watershed. Nearby communities will also be part of the agricultural and natural resources college effort to clean up the bay, as researchers plan to consult residents to help craft solutions.

Rather than simply taking samples from the bay and studying them in a lab, researchers will determine the social variables affecting the area by conducting surveys, taking photos and interviewing community members, and using that data to find the most efficient ways to reduce pollution.

“This project has a very strong community aspect,” landscape architecture professor Victoria Chanse said. “We’re linking the social side with the ecological, which is a big strength of our proposal.”

The public health school and engineering college will also be part of the three-year project. The research team also hopes to include undergraduate and graduate students, with research potentially counting as a Capstone project.

“The university has many assets that could aid in this project,” Chance said. “We want to connect several disciplines together to improve water quality.”

While this isn’t the first project to attempt to reduce the bay’s pollution, bioengineering professor Hubert Montas said they are typically done on a “broader basis” and do not focus on smaller communities. Because the university’s project targets a smaller area, it’s considered innovative and unique.

“I think this is a big honor for the continuation of improving water quality,” environmental science and technology professor Paul Leisnham said. “We want to go to more lengths to create that connection between scientists and people on the ground.”

Leisnham, who is leading the research team, said learning about a society’s attitude on water and pollution is a critical component in discovering long-lasting solutions for that population. While some wealthy communities may be open to certain practices, he said, others may not be as receptive to costly remedies.

“I think that a majority of populations are concerned about stormwater structures in neighborhoods,” Leisnham said. “Our ultimate goal is to develop a diagnostic decision that will please the communities and improve these runoff problems.”

The university won the grant through the EPA’s Science to Achieve Results program, which provides monetary awards to environmental science and engineering proposals. Researchers said the aim of their project is to change the way scientists look at and study water pollution.

“This research is pioneering, in a sense,” Montas said. “Overall, this project is not just important for the university, but it’s a model to approach pollution nationwide.”