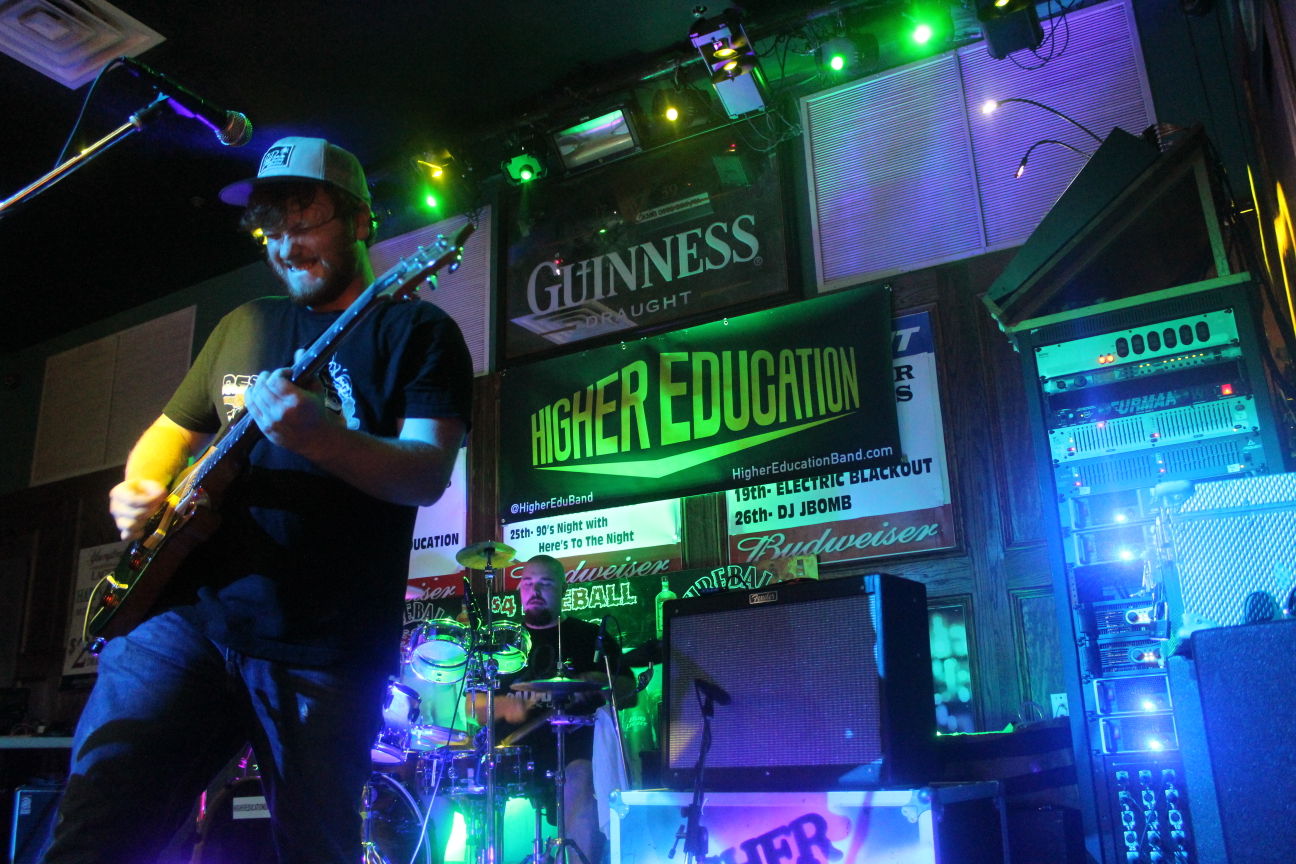 Music has played an integral role in the lives of brothers Petey and Danny Devaney for as long as they can remember.

It all started with inspiration from their father, who was a member of an ’80s hair metal band called Forcer. Embedded in his DNA, Danny’s passion for creating music led the then-15-year-old to play in various garage bands with friends. A few years later, he convinced Petey to start helping him concoct some tunes — bringing the duo one step closer to the formation of Higher Education, their band with Bradley Wilson that just released its second full-length album, Would You Like Fries With That.

The band became actualized in 2010 when the Devaney brothers (vocals, guitar) met Wilson (drums) through a mutual friend — a chance meeting that proved to be an unlikely stroke of luck for the soon-to-be trio of musicians.

“It was funny because [the day we met] was the same day that they got the news that their former drummer had quit,” Wilson said. “I came over with my buddy to their parents’ house where they were living at and they were practicing in the basement. I just came down and played the drums with them and it just instantly meshed.”

The group began practicing in the Devaney’s parents’ basement, which Danny described as “an unfinished, leaky basement tilted on its axis.” It was a less than ideal location, he said, but his parents were nothing but supportive.

In 2013, they moved into Wilson’s childhood home — a sizable house nestled in one of the suburbs surrounding the University of Maryland. They constructed a studio in the basement — “a work in progress,” according to Danny — that enabled the guys to work tirelessly on their music into the late hours of the night.

It was a tremendous aid for Petey, who, while focusing his energy on the band, was simultaneously a criminology and criminal justice and sociology major at this university while working as an assistant teacher at Friend’s Community School in College Park.

“I would come from class, go to work, come home and practice for a few hours, do all my homework until 2 a.m. or 3 a.m. and then do it all over again the next day,” he said. “I pretty much went to college and got a degree just to realize I wanted to be a musician.”

He was tempted to give up many times, but he persevered, eventually graduating in 2012.

“The whole time I wanted to quit, but I figured for myself and for my parents I would get my degree, which I did,” he said.

While Petey was stretching himself thin, Wilson — a lifelong resident of College Park and an avid Terps fan — and Danny kept their primary focus on making Higher Education a success. Their hard work culminated in the March 2013 release of their first album Chasing Highs — an 11-track compilation of songs with eclectic genre influences that span from reggae to classic rock.

Recording in Baltimore with WrightWay Studios, the group followed up that release with its second album, Would You Like Fries With That, this August. It’s very similar to the band’s prior work — beachy vibes, vivid lyricism that often delves into storytelling and numerous references to alcohol, drugs and sex — which can be attributed to the group’s songwriting process.

“We use old songs; nothing ever gets thrown away,” Danny said. “Some of these songs on [Would You Like Fries With That] are really old songs that we’ve written, and some are newer ones. We never want to lose material, so we are always willing to record everything.”

As with all of the group’s songs, the tunes on its latest album are inspired by personal experiences and are brimming with intriguing anecdotes. “Liquor Store,” for example, is the first song ever written by Petey, who now writes a good portion of the group’s music, but the song didn’t surface until the second album. This is another example of the band’s sporadic process, by which they churn out jams both new and old. “Pleaser for the Teacher” is a revamp of a song from their father’s band with the same name and raunchy lyrics, “Pleaser for teacher/ She’s giving me an A/ ‘cause when it comes to loving/ I always make the grade,” but with a more contemporary sound.

None of the band’s content — from its name to the themes of its songs — are created with a specific message in mind, Petey said, and instead are meant to be left up to the interpretation of the listener.

But Wilson has his own interpretation of the group’s moniker.

“My take on it — what I have convinced myself to believe — is that since we do so many styles of music, it’s that we are trying to educate and get everybody to listen to everything,” he said. “As opposed to doing just one genre and being closed-minded.”

After years of performing in local venues like Looney’s Pub, the group is embarking on its first tour outside of the DMV area, making stops in New York, Ohio, Massachusetts and Pennsylvania, among other states.

It’s one of the first steps the band is taking to spread its influence, but all three members insisted they wouldn’t change their style to amass a large following. In the end, they said, all that matters is staying true to themselves.

“We don’t want to write songs just to make it sound like what’s on the radio,” Danny said. “We write what we like and try to make some good songs.”

“We want fans,” Wilson added, “but we’re not going to sacrifice our original style to do that.”